The third Super Sunday of the World Series of Poker Online 2020 has crowned two maiden bracelet winners, and the final table of Event #48: $1,500 MILLIONAIRE MAKER has been set. Furthermore, yet another country has been added to the list of WSOP bracelet winners as Lithuania got on the scoreboard just one day after Estonia.

Natural8 player Paul Teoh already had two final table appearances in Pot Limit Omaha events this festival, but narrowly missed out on his first-ever WSOP bracelet both times. The third time proved to be the charm however, as Teoh clinched the title in Event #47: $1,000 Short Deck Hold’em, amidst a field of 487 entries and a prize pool of $462,560.

Other Natural8 players among the final nine contenders also included Shota “shorta222” Nakanishi and the highly accomplished Mike Watson. Watson even held the lead when play resumed. It took around one hour to reduce the field and Nakanishi became the first casualty, taking home $6,850.08 for his efforts.

What followed were four quick eliminations as Teoh and Andrei “iosif stalin” Konopelko traded the lead back and forth. Down to the final four, the chip counts were quite even but it was Konopelko that bowed out when his ace-queen ended up second-best to the king-queen of Michelle “hu4trollz” Shah.

Teoh took the lead from Shah when he turned a full house, and eventually sent Watson to the rail in 3rd place. This battle between the Natural8 players saw Watson at risk with jacks versus tens, and a jack on the river improved Teoh to a straight. From there on out, Shah was unable to mount a comeback and had to settle for a consolation prize of $60,253.59 when ace-jacks were cracked by queen-jacks.

As the fourth Natural8 WSOP bracelet winner, Teoh has more reason to celebrate as he walks away with a $15,000 Team Bling sponsorship. He collected $82,202 for his win and is the third player from Malaysia, after Junzhong Loo and Chin Wei Lim, to win a coveted WSOP gold bracelet.

Natural8 players who win a WSOP gold bracelet have the chance to net ambassadorships worth between $7,500 and $15,000, as part of the exclusive Winner’s Circle promotion. And if a Natural8 player wins the WSOP Main Event, they will walk away with a massive $100,000 in live event and online sponsorships. 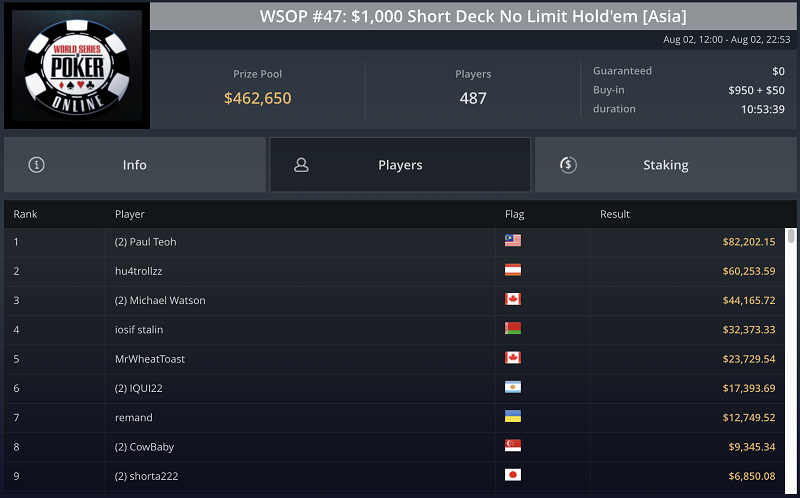 It was a mad dash from start to finish in Event #49: $500 Turbo Deepstack No Limit Hold’em as the tournament featured a starting stack of 40,000 chips and levels of eight minutes. In six hours, it was all over as a huge field of 2,978 entries was whittled down all the way to a champion.

Four of the finalists had to fire a second bullet to take home a portion of the $1,414,550 prize, and several well-known poker pros reached the final table for a chance at their first WSOP bracelet. Among the finalists were two Natural8 players: Guillaume Nolet who finished in 8th place for $20,317.88, and Ezequiel “lafiera8” Waigel who ended up in 6th place for $39,301.57.

As the event came down to the wire, only Pierre “Malaska” Merlin and Vladas “apuokos” Burneikis had more than a couple of big blinds. The duo seemed destined to meet in heads-up after taking turns to knock out the opponents, and their duel was set after the departures of Jeff “allin donk” Cormier, Brendan “doji” Sheehan and Boris Kolev.

Merlin eventually got short and moved all-in for five blinds with nine-eight suited, only for Burneikis to call with queen-jack. A queen on the turn left Merlin drawing dead and he became the second-place finisher for a $147,052.65 payday. Burneikis claimed the top prize of $204,523.20 and became the first player from Lithuania to earn the elusive WSOP gold bracelet. 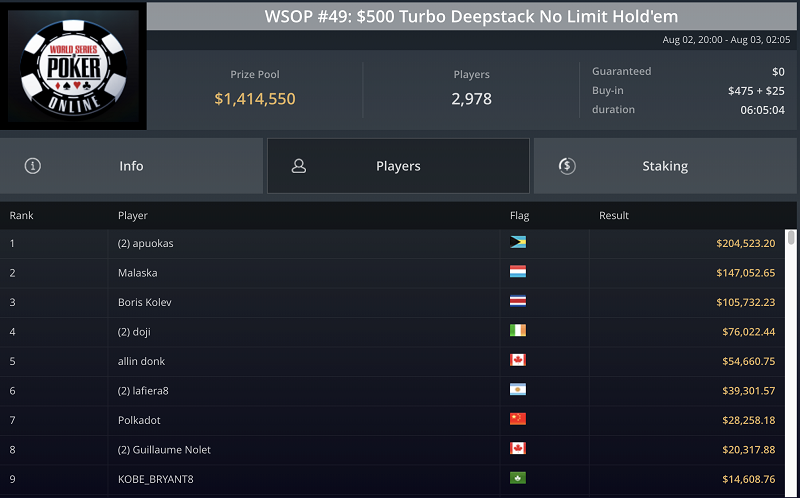 One of the highlights of the entire tournament schedule was the highly anticipated Event #48 $1,500 MILLIONAIRE MAKER which came with a guaranteed prize pool of $5,000,000. There was never any doubt that this amount would be reached, and was in fact crushed, thanks to 6,299 total entries which boosted the prize pool all the way up to $8,976,075. 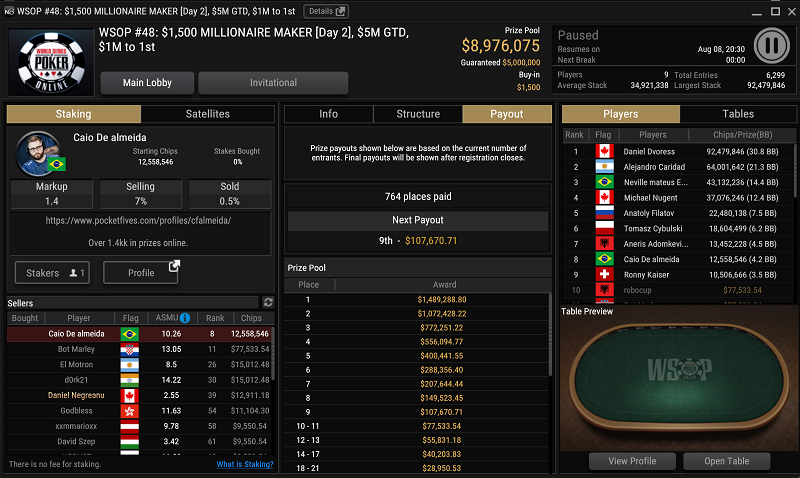 The top two finishers in this event are slated to take home seven-figure paydays, as each pay jump becomes vital on the way to crowning a champion.

On top of the bracelet, the three remaining Natural8 players now have the chance to earn a Team Bling sponsorship as part of the Winner’s Circle promotion: Daniel Dvoress is the chip leader with 92,479,846, Neville “NevSlater” Endo Costa sits in third place with 43,132,236, and Caio “Ez4ENCE” De Almeida is one of five short stacks below 10 big blinds with a stack of 12,558,546. De Almeida is the brother of Natural8 streamer Daniel “Dan.Almeida” De Almeida and has locked up at least $107,670.71 for his efforts already.

The final table also features well-known poker pros Anatoly Filatov and Ronny Kaiser, and it is certain that a first-time WSOP bracelet winner will be crowned as none of the finalists have one to their name so far.

Daniel Negreanu bowed out on the final four tables in his first appearance of the festival, and further notables such as Seth Davies, Wei “WayneHeung” Tso, and Norihiro “orzorz” Otani shared the same fate. Isaac Haxton, Sam “JejuKingCrab” Razavi and Michael Addamo made it even further but departed within the top 20. Dvoress cemented his current lead when he eliminated Manuel “robocup” Ruivo with pocket nines versus ace-four to set up the final nine.

Play will resume on the following Saturday, August 8th 2020 with live stream and cards-up coverage available on a delay, as the event plays down to its eventual champion.