The High Roller action continues for some of the biggest names in poker on Natural8, one of the lead operators on the GGPoker Network (GGPN). Read on for a recap on the five and six-figure score winners this past weekend.

Zodiac Tournament Events at a Glance

The popular Chinese Zodiac series is, as the name implies, inspired by the 12 animals in the Chinese Zodiac. Running daily, players who win in these events claim cash prizes and unique avatars.

Players from all over the world can participate, as was the case in Saturday’s CN¥388 Zodiac Main Event. The guaranteed prize pool was surpassed, thanks to 612 entries creating a final prize pool of CN¥218,459.52. “gor_dzi_shon” from Belarus earned the biggest portion, taking home CN¥37,904.43 for their efforts.

The High Rollers series had already crowned several champions, but big paydays were still up for grabs heading into Sunday.

The High Rollers: Main Event drew a total of 194 entries. With the top 27 spots paid, Canada’s Ami Barer ended up the bubble boy. Kristen Bicknell, Alex Foxen, Dario Sammartino, Andras Nemeth and Juha Helppi all cashed but fell short of the final table. Notables to make it one step further were the likes of Wei Zhao, Artur Martirosian, and Daniel Dvoress. Laurynas Levinskas scored the top prize of $38,146.55 after almost eight hours of play. 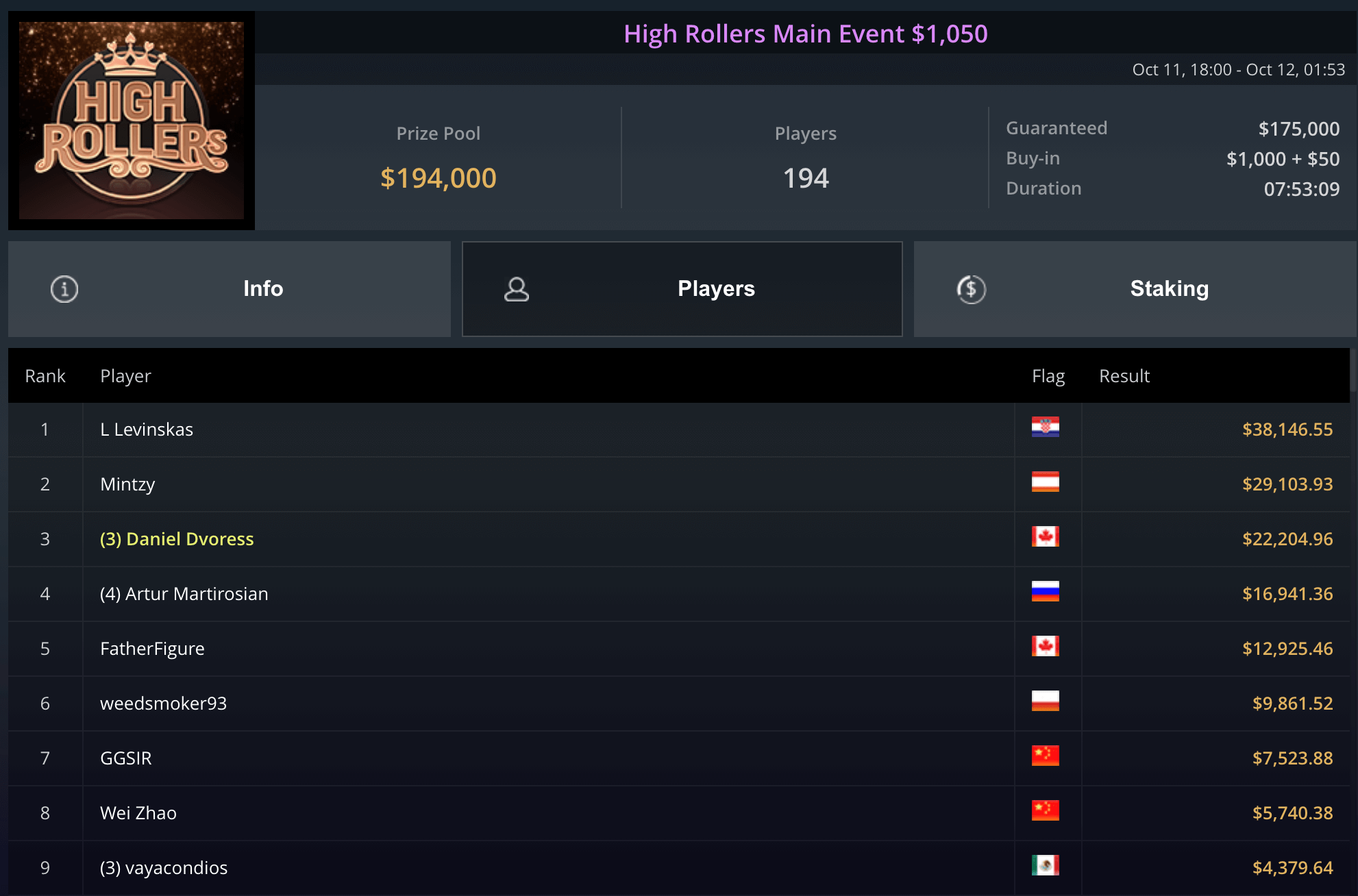 In High Rollers: Blade Prime, 42 entries ponied up the $5,250 entrance fee. Five of them ended up sharing in the $210,000 prize money. Stephen Chidwick bubbled, while Fedor Holz min-cashed on his second bullet. Ami Barer was next to bow out, followed by Timothy Nuter. Ultimately, Philippe D’Auteuil defeated fellow Canadian Daniel Dvoress in heads-up for $89,582.61, leaving the latter with a consolation prize of $52,930.03.

The top 13 finishers in a field of 98 entries were paid in the $1,050 High Rollers: PLO Main Event, as four-card aficionados took to the virtual felt. Fernando “JNandez87” Habegger was the first casualty on the final table, which also featured Jeff Kirsch, Adam “MikePrice82” Hendrix, and Miguel “FreshlyBaked” Seoane. Idris Ambraisse fired four entries en-route to second place for $17,588.93, while Rui Ferreira notched up the final victory at $23,225.06.

In a field of 38 entries, Ami Barer won the High Rollers: Short Deck for $8,105.11. High Rollers: Blade Mulligan then saw 49 entries at the $5,250 buy-in. The usual players in the high stakes scene were involved, with Alex Foxen bubbling this time. Six spots were slated a portion of the $250,000 prize money, with Ferreira min-cashing. Dvoress finished runner-up to Pascal Hartmann for another $58,745, leaving the Austria-based poker pro the final $95,537.39.

GGMasters and MILLION$ Tournaments in a Nutshell 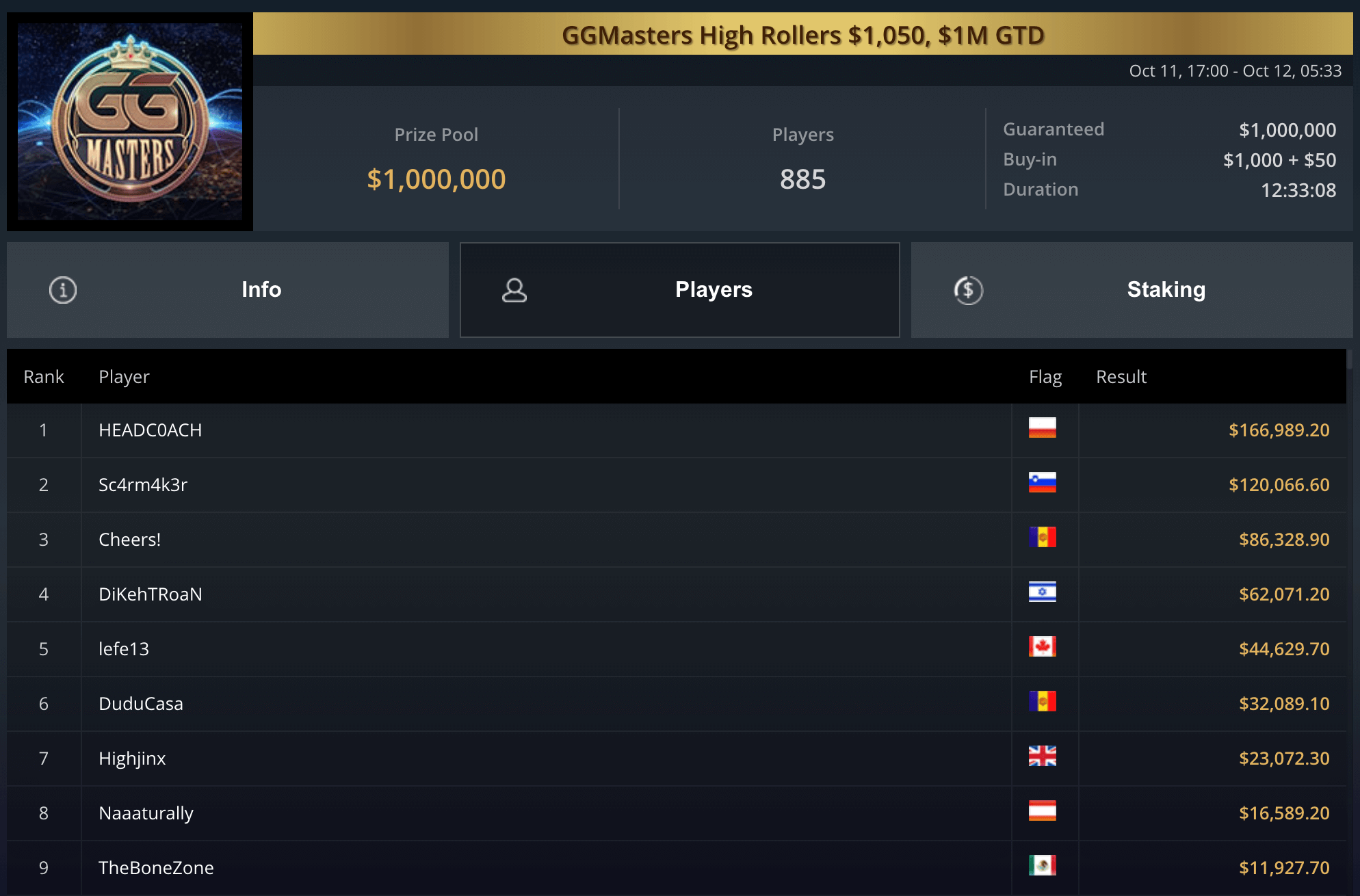 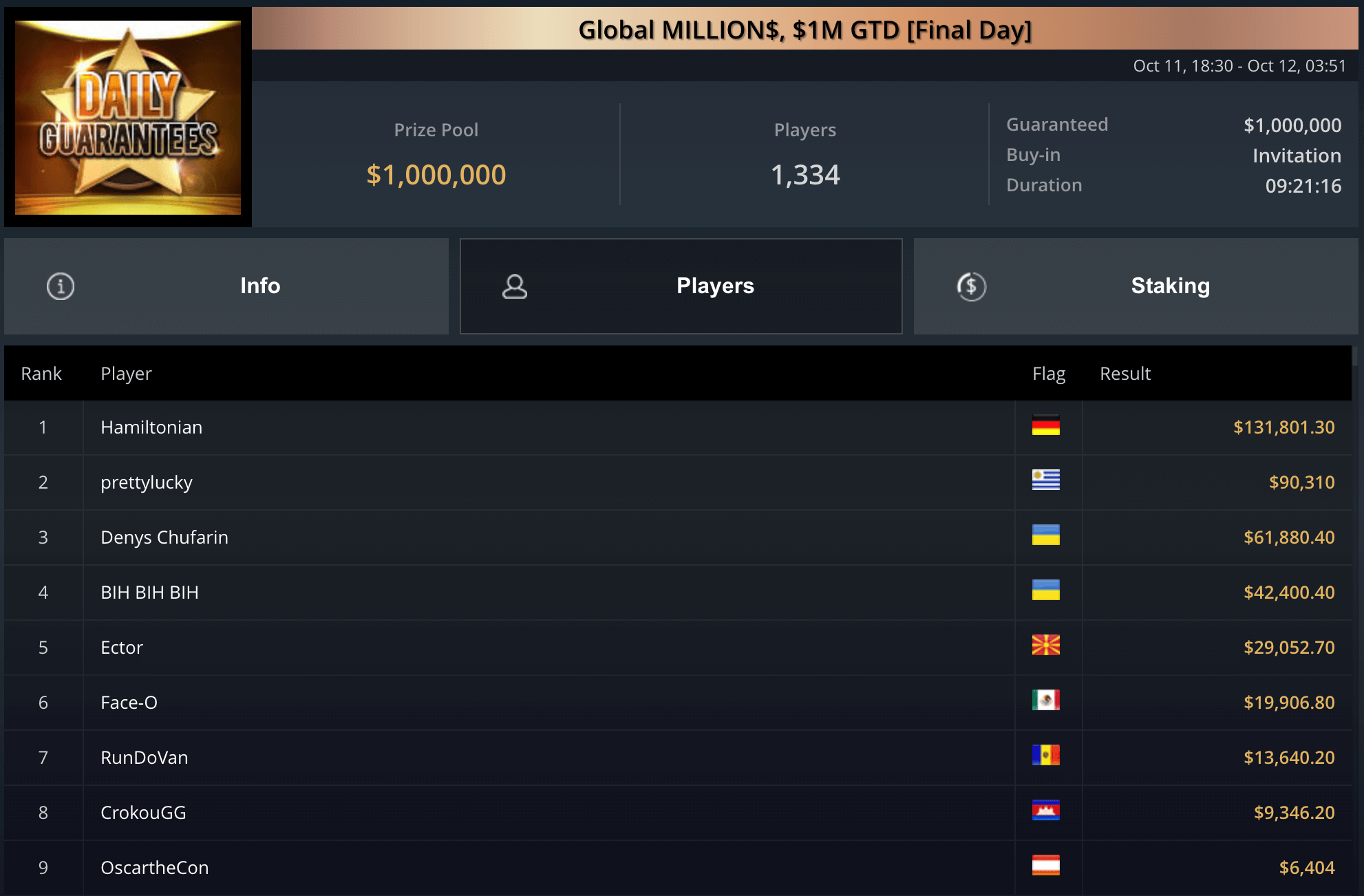 In the Bounty Hunter edition of the High Roller MILLION$, China’s Qibing “degenkaliu” Wang came out on top after nine-and-a-half hours. Out of a field of 427 survivors on the final day, “degenkaliu” was which awarded a top prize of $275,594.55. Japan’s “Qoomame” earned $188,837.10 for their 2nd place finish, and other notables on the final table were Miguel “FreshlyBaked” Seoane, “needluck” and Niklas Astedt. 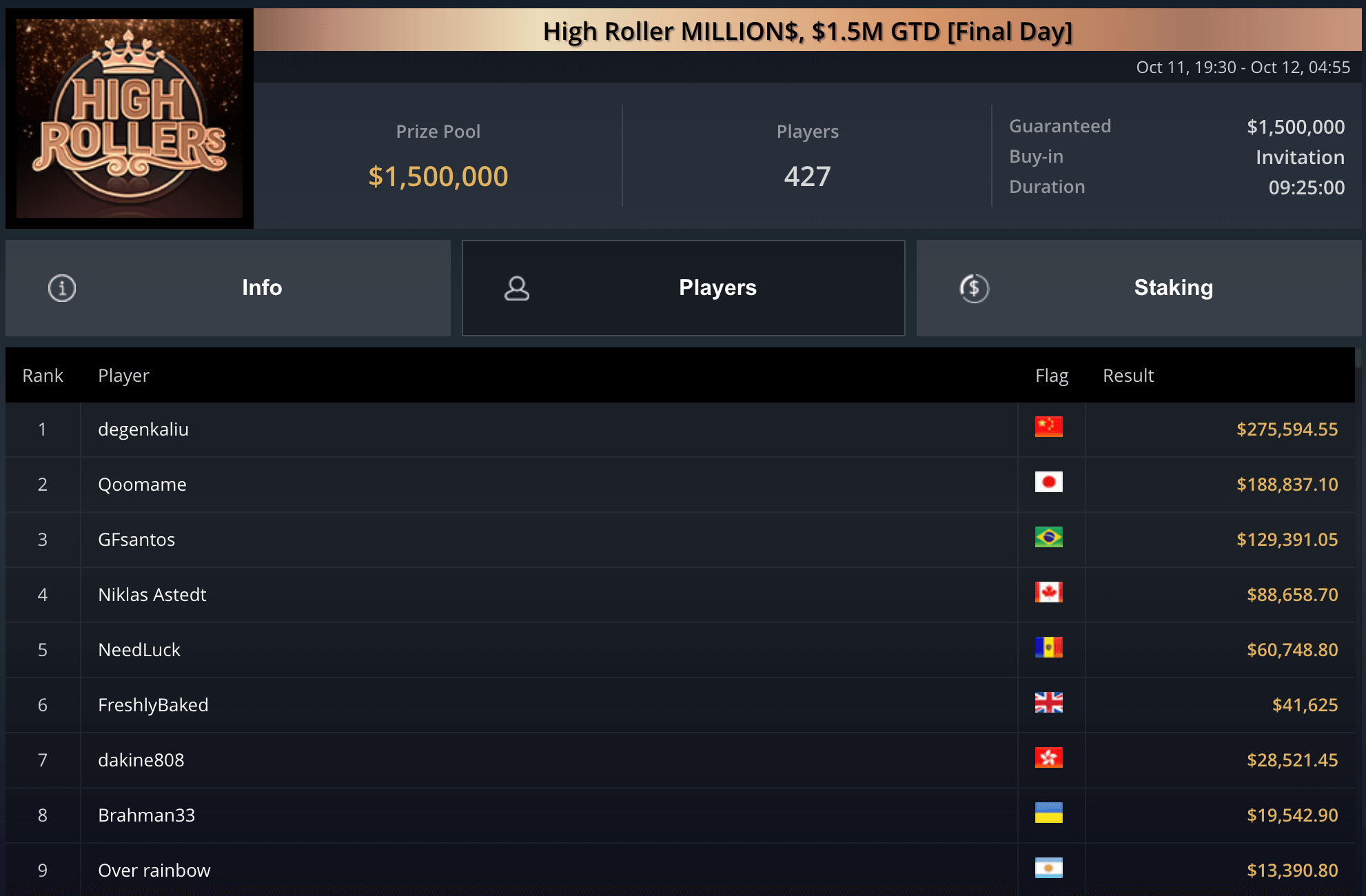 Last but not least, there was also an overlay of $130,000 in the Super MILLION$ High Rollers. Drawing a total of 130 entries for the $10,300 buy-in and running at the same time as the Bounty Hunters Series edition, the top 15 spots were paid. Natural8 Team Bling member Daniel Dvoress ended up as the bubble boy.