The weekend has always been the busiest time on Natural8, and this past one was no exception. It saw the conclusion of the GGSOP Tournaments (the low-stakes version of the recently concluded World Series of Poker Online 2020), as well some high roller events that attracted some of the biggest names in poker. The month of October also kicked off on Natural8 with a brand-new tournament series, exciting promotions and a software update. 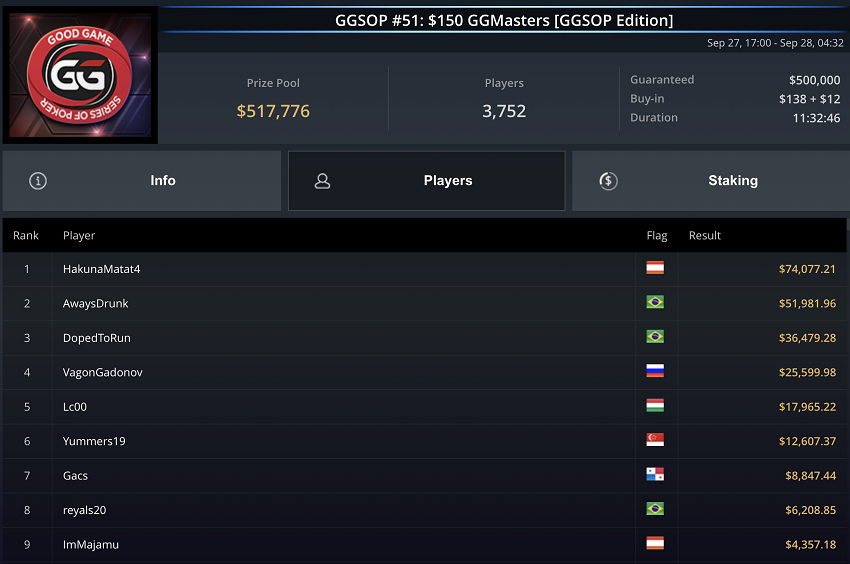 Natural8’s weekly $150 GGMasters saw a total of 3,752 entries for the GGSOP Edition, resulting in a prize pool of $517,776. It took more than 11-and-a-half hours to determine a champion in Austria’s “HakunaMata4”. Having sold 49% of their action through the Tournament Staking feature, they made their investors very happy by coming out on top and cashing for $74,077.21. Among the finalists was also Ho “Yummers19” Bao Qiang, who finished in 7th place and took home $12,607.37. 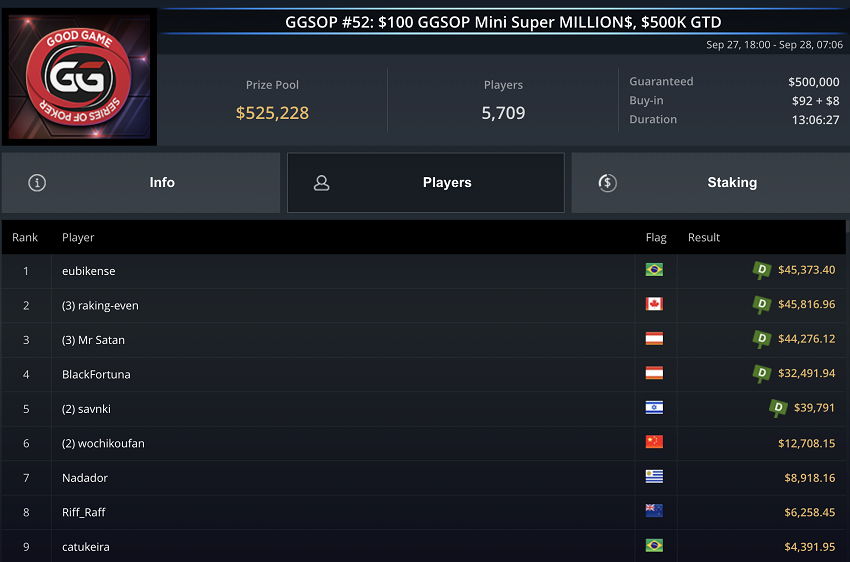 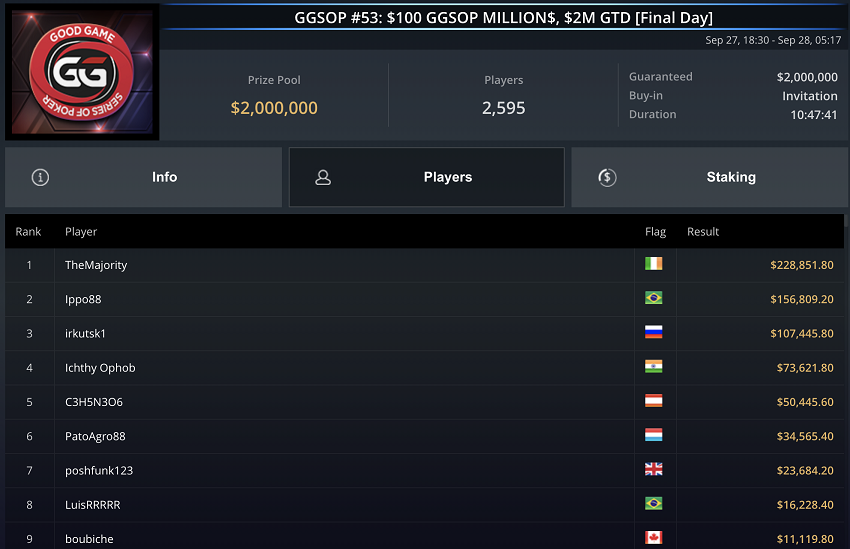 In the very popular $210 Bounty Hunters Main Event, which takes place every Saturday, a total of 1,822 entries ensured that the guarantee was easily surpassed. The $364,400 prize pool was split into cash and progressive knockout bounty prizes with some 260 spots paid.

Natural8 online streamer Dan Almeida was among the bounty targets to reach the cash spots and finished in 154th place, while Damian Salas exited in 130th place. Other notable names among the top 100 finishers were Julien “stroposoz” Stropoli, Niklas Astedt, Peter “BIG CHI” Chien, Adrian “BuckStopHere” Buckley, and Ilya Anatski. The biggest slice of the prize pool went to “JaxTeller” who took home $52,392.61, of which nearly half came from accumulated bounty prizes. 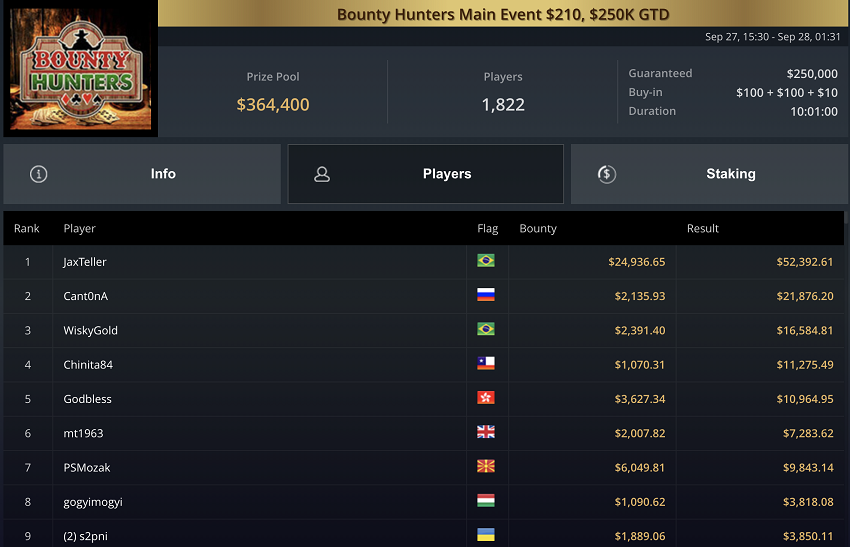 Among the several High Roller events on the Super Sunday schedule was the High Rollers: Blade Mulligan, with a buy-in of $5,000 and a guarantee of $100,000. A total of 78 entries boosted the prize pool to $370,500 and the top 11 spots were paid. Notable names in poker that made the cut included Timothy Adams, Laurynas Levinskas, Stephen Chidwick, Sergi Reixach and Isaac Haxton.

Frenchman Idris Ambraisse, who was runner-up in one of the WSOP Online 2020 events, finished in 3rd place for $52,437.30 with his only entry. Rok Gostisa was in for two bullets and turned that into $68,837.64, while Artur Martorisian entered five times. The red-hot running Russian ended up as the winner and cashed for $90,367.44.

The top four finishers in the High Roller MILLION$ all walked away with bigger cashes from their initial investment of $500. Only 630 players made the cut on their respective Day 1s, and it was American poker pro Blake “Beast2018!” Bohn who dominated the final stages. 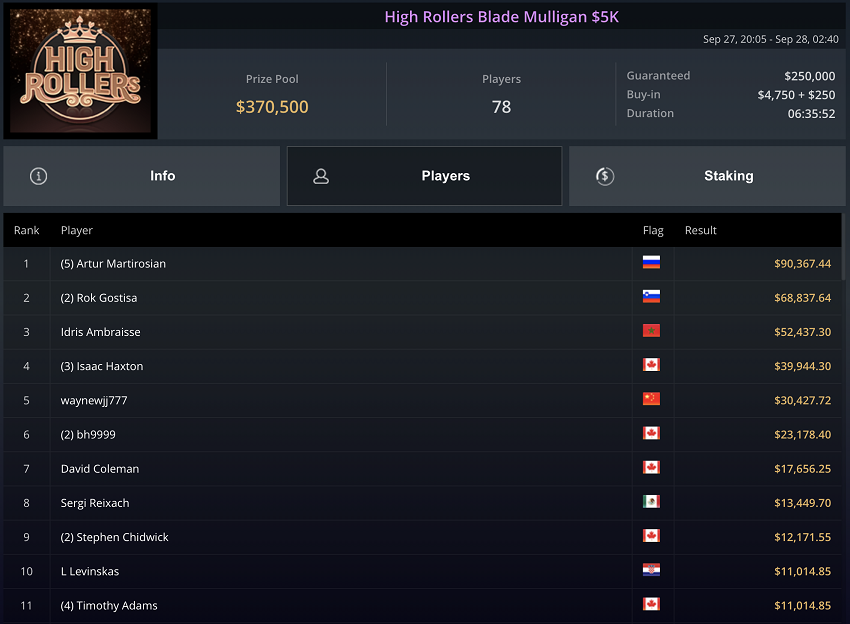 Sunday also saw the trademark High Rollers Super MILLION$ play out, with a total of 196 entries emerging to all but reach the guaranteed prize pool of $2,000,000. As has been the case since the tournament was introduced, Day 1 played down to a nine-handed final table.

The bubble burst with the elimination of “blackjak19” and some big names that fell after included Stephen Chidwick, Bertrand “ElkY” Grospellier, Thomas Muehloecker, Christoph Vogelsang, and Mike Watson. Finnish high stakes regular Samuel Vousden then bowed out in 10th place, to send the event on break.

French-Canadian Guillaume Nolet was the first casualty on the live-streamed final when his fives lost a flip to king-queen suited. “CharlieD23” was gone next, followed by Rok Gostisa, while “McDavid97” was the first player to earn a six-figure payday. Jake Schindler was the second player in a row to send his chips to Sean Winter, who then became the 4th place finisher after running with ace-queen into the kings of Bert Stevens.

Those kings also held for Stevens a few minutes later against the pocket nines of “Nator”. The online poker legend with more than $10 million in recorded cashes then made quick work of “Beanboozled”. Ace-jack suited dominated king-jack as Stevens came out on top for a payday of $393,262 while “Beanboozled” had to settle for a still impressive $300,040.60. 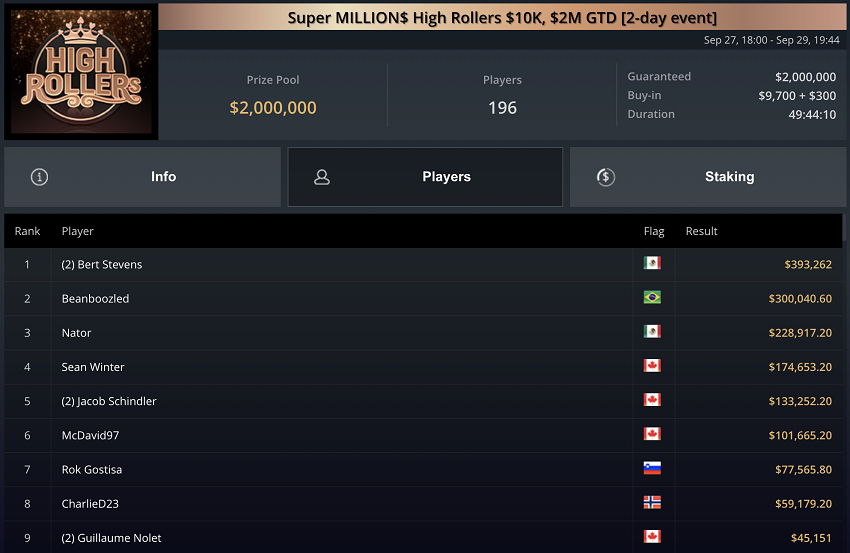 The start of October saw a new online poker festival kicking off on Natural8, with the launch of the inaugural WPT Asia Online Series. Slated to run from 3rd to 25th October, it is set to be the biggest online series in Asia and will pay out at least HK$100,000,000 in guaranteed prizes!

New players can kick start their journey with the First Deposit Bonus, where they can choose between having their deposit matched by 200% (up to $500) or get $100 in instant rewards. There’s also the Weekly First Depositors Freeroll, which gives players making their first online poker deposit a shot at winning cash prizes. There are more than 50 micro stakes tournaments taking place daily as part of the Elemental Daily Series, where buy-ins start from as low as $0.30. Poker enthusiasts on a budget can even win entry for free by finishing in the top eight in any of the Natural8 Hourly Freeroll tournaments.

There’s also a total of $4,300,000 up for grabs in Natural8’s October Cash Giveaway! There’ll be Daily Leaderboards for the Omaha, Hold’em, Short Deck and Rush & Cash tables, as well as All-In or Fold Instant rewards. No matter which stakes you play, cash prizes await the most active players!

GGNetwork introduces new updates every month, and as part of the latest one, new micro stakes were added: Hold’em $0.01/$0.02, Omaha $0.01/$0.02 and Omaha $0.02/$0.05. Improvements for tournament players include a hand-for-hand mode when only 2 tables remain before the final table. All those that reach the final table can then grab a fresh cup of coffee, thanks to the newly introduced five-minute break prior to the restart.

Two-time WSOP bracelet winner and GGPoker ambassador Bertrand “ElkY” Grospellier can also now be used as an emoji on all poker tables, and various new exciting iSoftBet, GGN and NetEnt casino games have also been added.