The World Series of Poker Winter Online Circuit is on the home stretch, with just a few more WSOP Circuit rings left to be awarded. This past weekend, two Natural8 players earned the winner spotlight while a third narrowly missed out.

Anson “Tara@0z” Tsang won his second career WSOP bracelet during WSOP Online 2020 on the GGPoker Network, and reached the final table of his first event (for the current festival) during the Christmas Holidays. He had to wait a couple of days for the conclusion, as the final table in Event #10: $400 CHRISTMAS COLOSSUS happened on January 2.

The tournament had attracted a field of 3,628 entries and the lion’s share of the $1,364,128 prize pool was paid out during the final table.

Tsang entered in the middle of the pack with plenty of big blinds at his disposal and they grew right away in the first hand. Chris Moorman, one of two other WSOP bracelet winners in contention, got it in with aces versus aces and Tsang flopped a flush.

Natural8 player Kristof “ultrafish” Segers fell in 7th place for $31,817 while Tomas Ribeiro failed to add another WSOP victory to his resume, bowing out in 5th place for $56,579. Tsang held up with aces when he needed to, and the field was down to the final two after start-of-day chip leader Cosmin-Ionut “cosmiNik89” Nica departed in 3rd place for $100,614.

The heads-up duel between Tsang and Canada’s “SHOOT_YOURFACE” was a rollercoaster as both held a commanding lead at times. Tsang went from being one card away from victory to heavy underdog, but then pulling ahead and eventually claiming the win.

“SHOOT_YOURFACE” had to settle for a respectable $134,170 while Tsang earned the WSOPC ring, top prize of $178,921 and another badge to show off on his Natural8 player profile. He will also receive a $5,000 LiveX sponsorship. 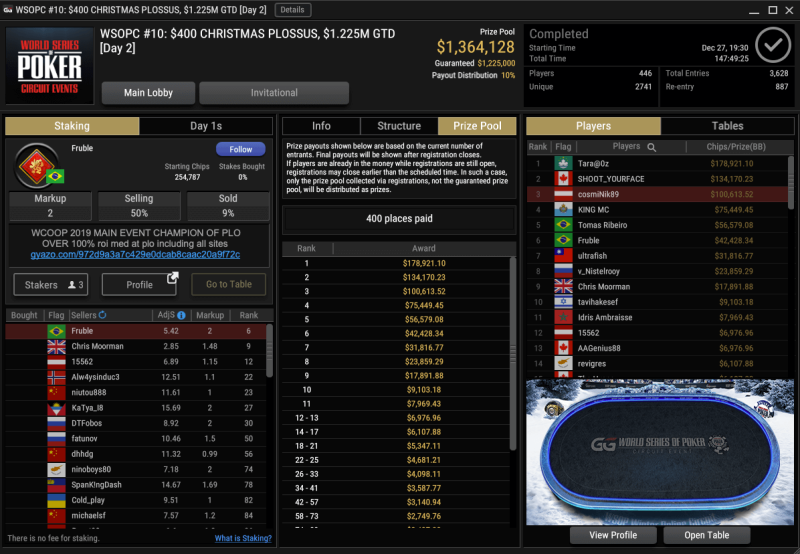 The German-speaking community finally got on the scoreboard in Event #12: $500 Deepstack as Fabian “lordof0513” Schmidt defeated Oliver Weis in heads-up to earn his first WSOP Circuit Ring. A total of 1,445 entries generated a prize pool of $686,375 and it took some ten-and-a-half hours to determine a champion.

The top 233 spots cashed and some of those who came close received their buy-in back, thanks to the Early Bird Bubble Protection feature. This feature allows for players who register prior to the start of certain events (buy-ins below $1,000) to receive their buy-in back when they bubble.

Among those to fall after were the likes of Andres “chokitin” Korn, Jessica Teusl, Ryan Riess and recent runner-up Marty “RetremntFund” Mathis.

Ronit “Songjoy” Chamani bubbled the final table after coming up short against Matthias “Mattinho” Auer, who was then the first to bust on the final table. Notables who made it further were WSOP $10,000 Main Event finalist (International Leg) “fullbabyfull”, James “MonsterCurry” Leong and Ludovic “Gr4vyB04t” Geilich, the latter of whom fell in 3rd place for $51,140. Weis then took home $68,196 for 2nd place and Schmidt earned the top prize of $90,943.

The third WSOPC Ring Event to take place last Saturday was Event #13: $10,000 Heads-Up No-Limit Hold’em, which attracted some of the biggest names in the international poker scene. Out of 94 entries, which came up short of covering the $1 million guarantee, only four players remain in contention for the top prize of $348,250.

The aforementioned Oliver Weis was busy multi-tabling, and defeated four opponents before bowing out in the round of eight to collect $62,188 for their efforts. The same payday was awarded to Juan Pardo, George Wolff and Wiktor Malinowski who all busted during the same round.

In the heads-up matches, Niklas Astedt will take on Cooper Li while Mirza Muhovic faces Ian Modder. The semi-finalists have $99,500 locked up and the loser of the heads-up final will receive $199,000.

Notables that made the cut and cashed were Farid Jattin, Sosia “Aunty_Ninja” Jiang, Chris Moorman, Kazuhiro “propofol-san” Shirasawa, and Bertrand “ElkY” Grospellier. Darren Elias and Ivan Zufic were eliminated on the final four tables, while Shannon Shorr bowed out in 18th place. Three-time WSOP bracelet winner Davidi Kitai bowed out in 15th place, and the final table was set soon after.

After being one card away from an exit on the final two tables, Brazil’s Yuri Dzivielevski went on a hot streak with aces to then double and knock out an opponent. He added another victim to his run with ace-king versus ace-ten and also knocked out Natural8 player “Internecik” of Lithuania in 9th place with aces versus sixes.

It was then another Natural8 player who dominated the action as Justin Park found aces several times to soar to the top of the leaderboard. Ultimately it was Park and Dzivielevski who reached the heads-up, and Park quickly pulled into an overwhelming lead.

However, Dzivielevski fought back and Park ultimately finished as the runner-up for $133,657. It was the second victory for a player from Brazil during the festival and Dzivielevski earned a payday of $178,236. 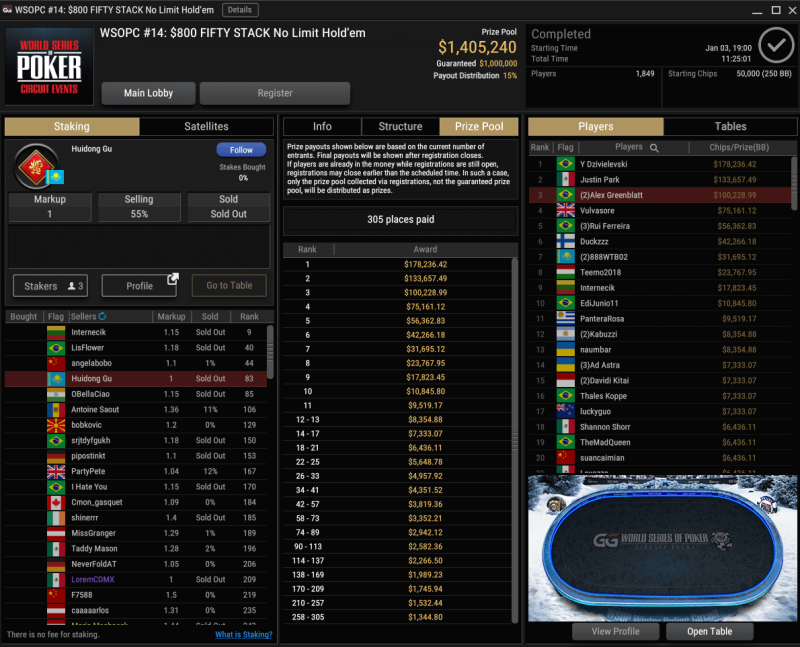 Michael Addamo has been one of the rising stars of the international poker scene in the last few years and rightfully claimed two WSOP Bracelets. The Aussie is also a regular in the high-stakes tournaments in the virtual arena and can regularly be spotted at the high-stakes cash games on Natural8.

Notables that cashed outside of the top 100 were Felipe Ramos, Michiel “Easterdamnz” Van Elsacker, Joao Simao and Endrit Geci. The non stop action whittled the field down rapidly and four Natural8 players made it all the way to the nine-handed final table. Hong Kong live event grinder Sparrow “FacelessMan” Cheung departed in 9th place for $37,460, while Austrian player “minterofbtc” claimed $66,614 for 7th place.

Addamo earned two of the first five knockouts on the final table and then won a huge pot against China’s “benchplayer8” with quads versus full house. He then knocked out his fellow Natural8 player with ten-seven versus aces when he made running two pairs.

“benchplayer8” took home $157,967. That gave the Aussie a massive lead and he dispatched his final two opponents in quick succession to earn the $374,604 top prize. On top of that, Addamo also wins a $5,000 LiveX sponsorship by Natural8. 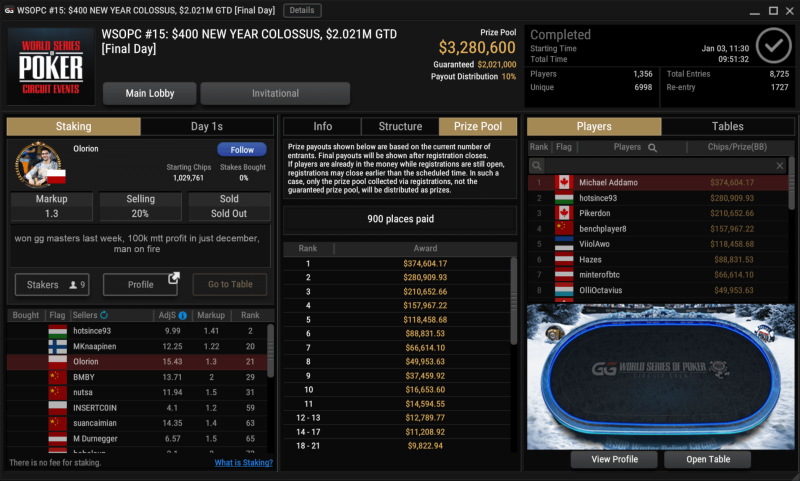 Four champions are yet to be crowned. The $10,000 Heads-Up tournament will conclude during the live-streamed final day on January 9 and the same day also features Event #17: $252 Deepstack Bounty Hunters.

One further mixed game remains on the schedule as Event #16: $3,000 Pot-Limit Omaha Championship will play down to a winner on January 5. Last but not least, the highly anticipated $1,700 Main Event is hosting its starting flights right now and all survivors will return on January 10 for Day 2.