We’ve reached half-time in the 2nd edition of the record-setting APT Online Series, and there’s plenty to talk about! Three of the six trophy events on Natural8 have now been awarded, and yesterday’s Super Sunday absolutely crushed any previous cash prizes.

After several close calls, Pete “TurboPete” Chen finally ended his two-time runner-up streak to eventually earn a victory of his own. Chen fired three bullets in a field of 101 entries in Event #86 $500 High Roller Deep Stack, with the third time proving to be the charm as he bagged the top prize of $11,790.29. 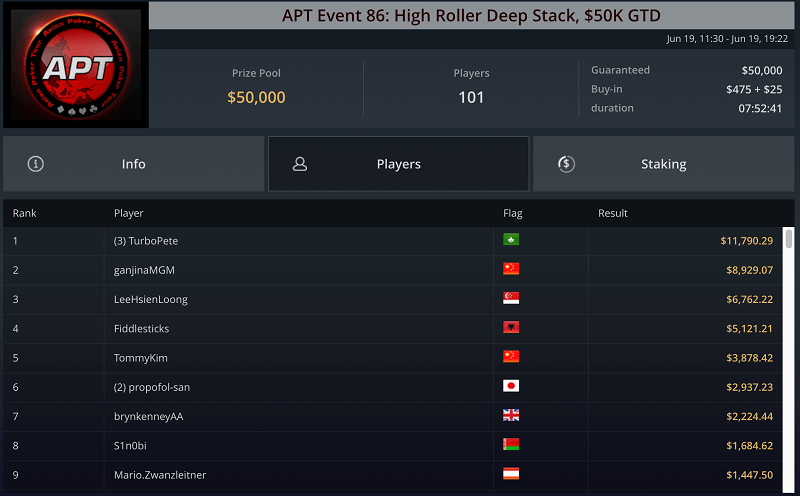 And that was just the warm-up for a busy, busy weekend at the tables with poker enthusiasts from all over the world.

In the third edition of the $200 Monster Stack, a total of 1,079 entries were cut down to 364 survivors who battled for a portion of the $250,000 guarantee. Popular poker streamer Patrick “HangulMalMoteyo” Tardif cut a deal in heads-up with “Theprofessor44”, earning him the bigger prize of $36,309.41 but ultimately seeing him concede victory to his opponent, who secured his second victory of the series along with a sizeable $34,964.27.

UK-based French poker pro Arnaud Enselme took down Event #114 Progressive Knockout and Event #122 NLHE Hyper to join the ranks of two-time champions, alongside “smallx11”. Thanks to plenty of other deep runs, Enselme currently tops the APT leaderboard with Lester Edoc and Jack Salter rising in the overall top 10.

Players had several chances to earn a stack for the final day of the $500 APT Main Event, with the guarantee of $1,000,000 all but reached thanks to a total of 1,985 entries. Only 463 players navigated successfully through their respective flights to remain in the running for the seven-figure prize pool, with the top 278 spots earning a minimum cash prize of $1,155.79.

New Zealand’s “putipupu”, a regular of the first APT Online Series and the recent WSOP Circuit festivals, finished in 7th place for $21,773.08, and the tournament ended with a three-way deal.

Romania’s “kidpoker82” walked away with $90,158.49 while Germany’s “M.Tsigalko” continued his recent successful string of results with a runner-up finish of $106,238.41. However, it was Canada’s “EL BEANjo” that earned $144,352.56 for the biggest payday of the festival so far. Players from Canada have been extremely successful in major events on the network in the last few weeks, so this certainly comes as no surprise at all. 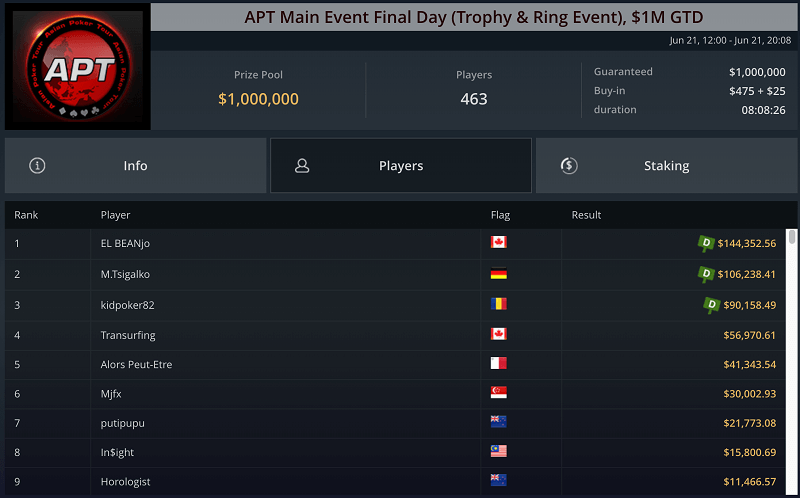 Super Sunday also featured the most expensive event of the schedule and the $300,000 guarantee in the APT $5,000 Super High Roller was smashed thanks to 108 entries, creating a prize pool of $513,000.

Many big names of the international poker circuit added the tournament to their grind schedule and the top 15 finishers locked up at least $11,009.36. Big names that came up just short were Sergei Reixach, Andrew Pantling, “Olekonjole”, and Lester “mon$terDad” Edoc. Aleksejs Ponakovs received the minimum cash and David Miscikowski locked up one pay jump before departing in 12th place. 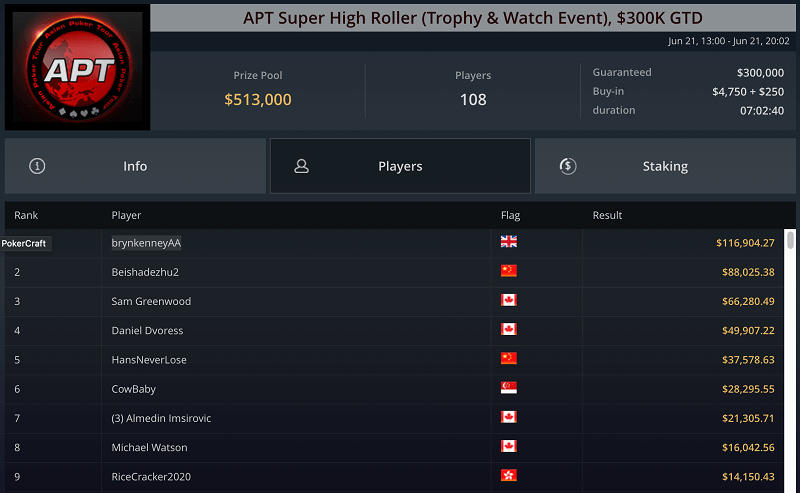 The Father’s Day grind proved to be a very successful one for Canadian poker pro Mike “GoJiGo” Leah. In the widely popular $100 Global MILLION$, 1,638 players returned to their seats for the final day but it was Leah that eventually collected all the chips for a top prize of $132,092.20. 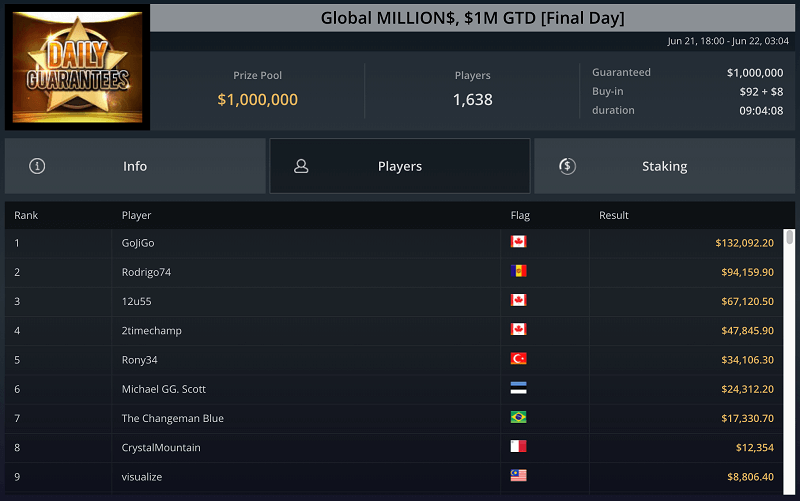 In the $500 High Roller MILLION$, a total of 674 players battled for their portion of the $2,000,000 guarantee after making it through their starting flight. 476 spots were paid, and Steve O’Dwyer as well as Simon Higgins made deep runs to bow out in 26th and 10th place respectively. Eight different nationalities were represented on the final table and the UK once again earned another victory as “MickeyM” walked away $285,986.80 richer. 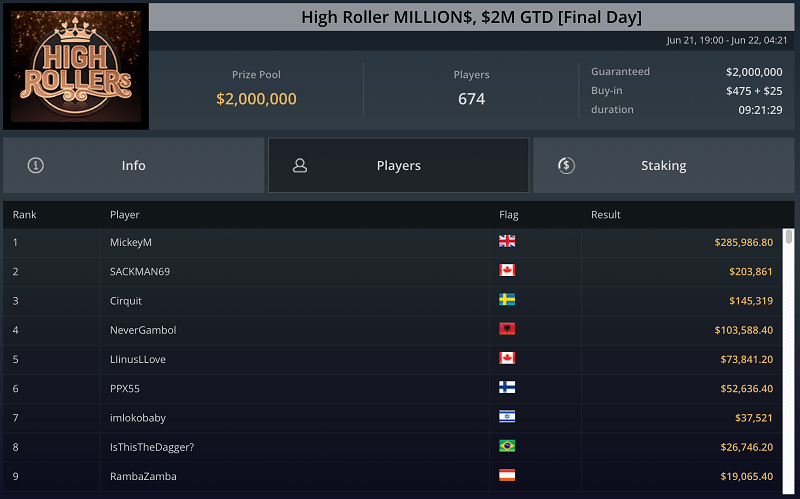