The final Super Sunday of the World Series of Poker (WSOP) Winter Online Circuit has concluded. All but one of the coveted WSOPC rings have been awarded, and the $1,700 Main Event has reached the final table.

One day prior (9 Jan), Estonia-based Spanish poker player David “MyLastHand!” Comeron earned his first WSOP Circuit ring. With just nine players left in contention for the Main Event, two Natural8 players not only have the chance to win the title but also a $50,000 LiveX sponsorship. Read on for more details on the final two official ring events of the festival.

The final progressive knockout tournament of the festival came at a bargain price tag of just $252. It turned out to be a busy day at the tables for bounty hunters, as nearly twelve-and-a-half hours passed before a champion was crowned. There were 2,963 entries in total, which created a prize pool of $711,120.

The top 368 players earned at least $401, and their winnings were boosted by each opponent they knocked out over the course of the day. Russian poker pro Andrey Pateychuk was eliminated on the bubble, and further eliminations kept coming at a steady pace.

Among the notables to make the final three tables but miss out on the nine-handed showdown were James “MonsterCurry” Leong, Egor “Futti18” Prokop, Diego “TeaLover” Falcone, and Turco Garcia.

Russia’s “v_Nistelrooy” reached their second final table of the festival and had to settle for $10,660 in combined bounty and cash prizes. The only Natural8 finalist was Bao Qiang “Yummers19” Ho, who fell in 4th place for a combined $25,977.

Only a few minutes later it was all over, as David “MyLastHand!” Comeron steamrolled to victory after he taking a commanding lead. He knocked out Mikhael “zyxel777” Aleksandrov and Tam “LilyP” Le in quick succession. Included in his total cash of $64,390 was the bounty portion of $35,614, notably bigger than his cash prize itself. 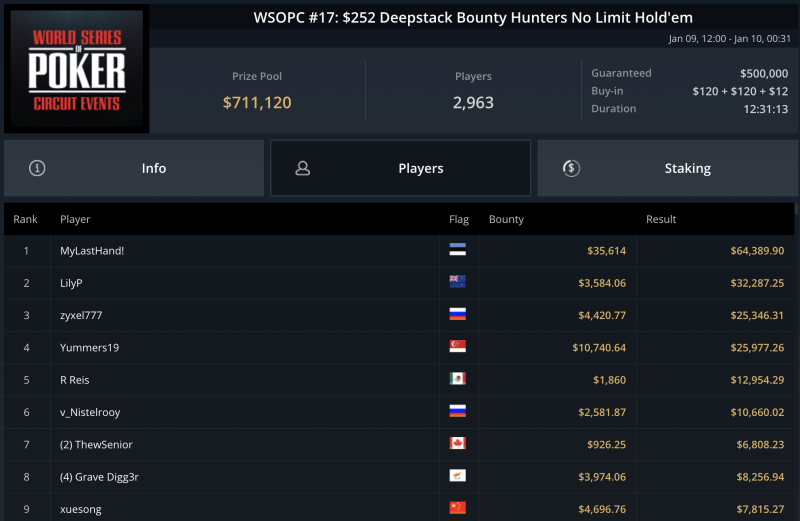 Some 1,112 players had survived their respective flights, and it was a speed race to the money with 700 spots paid. Hungary-based French pro Benjamin “Geraaaard” Chalot ended up as the bubble boy, securing a min-cash of $4,107 for all remaining contenders. Among the hundreds of players to cash was also Bertrand “ElkY” Grospellier, who was eventually eliminated by Dylan Linde.

Natural8 Team Hot ambassador Danny Tang nursed a shorter stack for an extended period of time. He reached the final three tables and then got it in preflop with one of the shortest stacks of all remaining contenders. Tang’s queen-jack was trailing against pocket queens; the ten-high flop provided a gutshot and the turn brought a jack. However, the river was a blank and Tang departed in 24th place for $29,033.

During the next scheduled break, only 20 players were still in contention. When they returned to their seats, it took just half an hour to get down to the nine-handed final table. Notable late casualties included Mario “djuk8” Vojvoda, Idris Ambraisse, Dorian “Gladiador20” Rios, Philippe D’Auteuil, and Junichi “Jun@N” Nakanowatari. The final table bubble burst when China’s “iownumind” had their aces cracked by the pocket treys of Alexandru Papazian.

Once the virtual chips were bagged up, Macau-based Paulius Plausinaitis had accumulated the most chips. His 76,004,224 are worth 95 big blinds for the final table, and the Lithuanian is one of the Natural8 contenders. The other is Joseph Cheong in 3rd place with 50,700,582 (63 big blinds). If either of them wins the Main Event, they will receive a $50,000 Natural8 LiveX Sponsorship.

All finalists have $123,106 locked up thus far and the winner will receive the WSOPC ring and a top prize of $1,236,361. The final showdown will be broadcasted with cards-up coverage and commentary this 16 Jan. 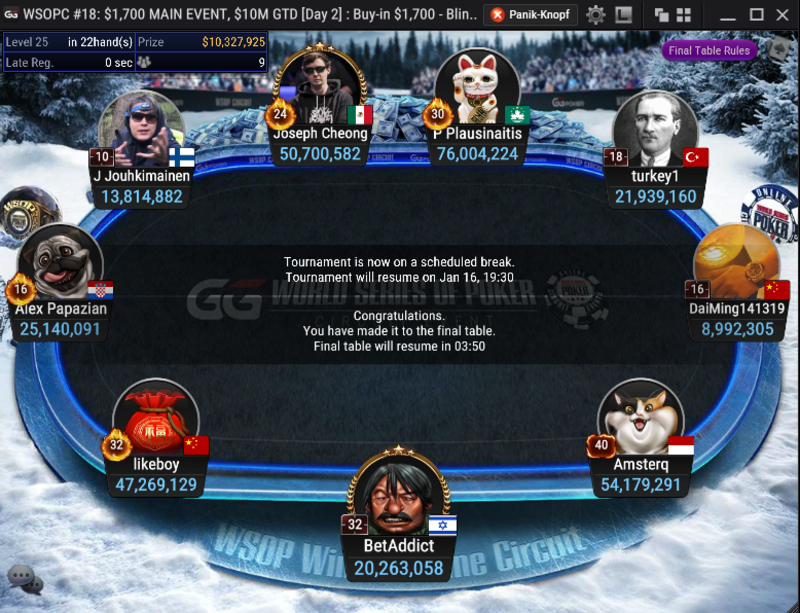