Ukraine, Ireland and Austria Bags A WSOP Bracelet each

Second Bracelet of the Festival for Ireland; Ukraine and Austria Join the Mix

Slowly but surely the inaugural World Series of Poker Online 2020 is on the home stretch, as the festival gears up for the $5,000 Main Event on August 30th. The first starting days have already taken place with plenty more to follow, for players from all over the world to continue aiming for poker’s most-coveted prize.

In the latest trio of tournaments throughout the week, WSOP bracelets were awarded to players from Ukraine, Ireland and Austria.

The Deepstack tournaments have been quite popular throughout the entire festival on GGNetwork so far, and Event #65: $600 NLHE Deepstack Championship was no different. Poker enthusiasts from all over the world battled in one of the more affordable tournaments on the schedule, with the event attracting a field of 2,911 entries and a total prize pool of $1,659,270.

It would be a long day for the eventual champion to emerge, as 14-and-a-half hours passed before one player finally accumulated all the chips. That player was Dmytro “Too Bad” Bystrovzorov from Ukraine, who defeated Austria’s Florian “Gaug1nho” Gaugusch in heads-up to claim the top prize of $239,906.02. Gaugusch, who is one of the participants in the ongoing Pokercode Grindhouse, had to settle for second place and a payday of $172,493.06.

Christopher “RambaZamba” Puetz reached yet another final table and this time finished in 4th place for $89,174.47; other finalists included notables such as Ivan “00COEL” Banic, Wojciech “ItOldUbefOre” Barzantny and Giovani “Mandjocka” Torre. Banic was the only Natural8 player among the final nine and finished in 6th place for a payday of $46,100.82. 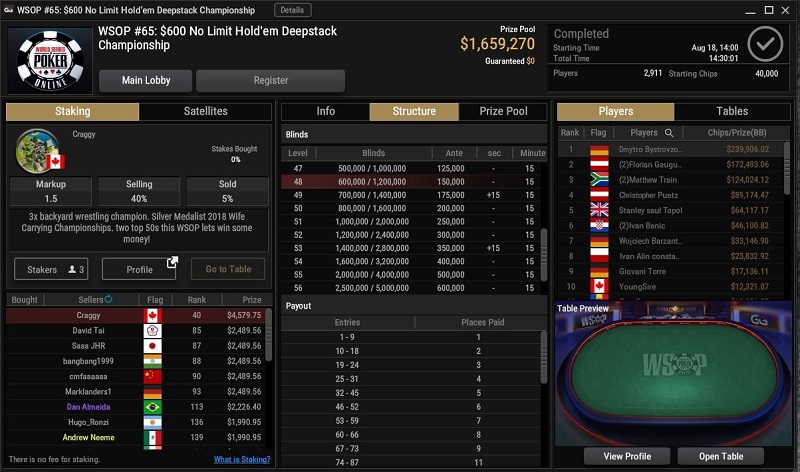 Not long ago, Eoghan “DrRoche” O’Dea won his first maiden bracelet and fellow Irishman Toby “shinerrr” Joyce followed in his footsteps when he took down Event #66 $800 Pot Limit Omaha.

Joyce came out on top of a large field of 1,281 entries to earn his first bracelet and top prize of $139,452.91, along with a package for the World Series of Poker Europe (WSOPE). It was a tough final table line-up dominated for a long time by the aggressive play of Mark “Beanboozled” Herm, who was eventually denied victory as he finished second to Joyce.

The German-speaking poker community had yet another close call with Jonas “deucesup” Kronwitter in 4th place ($57,882.52) and Grzegorz “CUatRhinosLV” Derkowski in 7th place ($22,121.61). Derkowski was the only Natural8 player who made the cut for the final table, and missed out on a potential $7,500 Team Bling sponsorship after his stack took a toll without showdown. 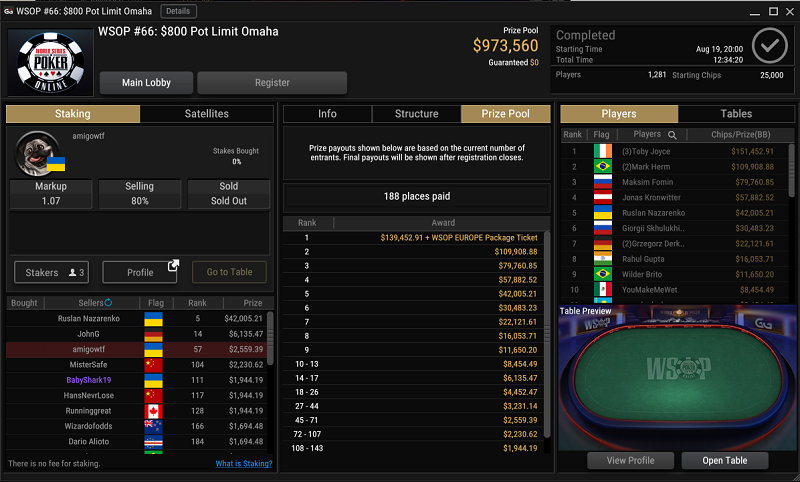 Herm entered the final table as chip leader and remained there for most of the time it took to reduce the field. Joyce nursed a short stack and chipped up without showdown, then doubled twice through Herm and knocked out Maksim “MAX FOMIN” Fomin to take over the lead. He eventually prevailed against Herm and turned a full house to seal his victory.

The first Limit Hold’em tournament of the festival thus far came with a buy-in of $500 and attracted a total of 706 entries for a $335,350 prize pool. Half of the field remained when late registration closed, and well-known casualties prior to the final two tables included the likes of Juha Helppi, Dan Smith, Dylan “mezcal” Linde, Erik Seidel, Benny Glaser, Niklas Astedt, and Matt “DNSFD” Vengrin.

Portuguese poker pro Rui Ferreira, American pro Connor Drinan, and WSOP bracelet winner Anson “Tara@0z” Tsang from Hong Kong were among those to depart on the final two tables. Only eight players sat down on the final table as Wei “dugui777” Zhao and Ken “diabloking” Okada hit the rail at the same time. Okada was the only Natural8 player still in contention and finished in 8th place for $4,758.41. 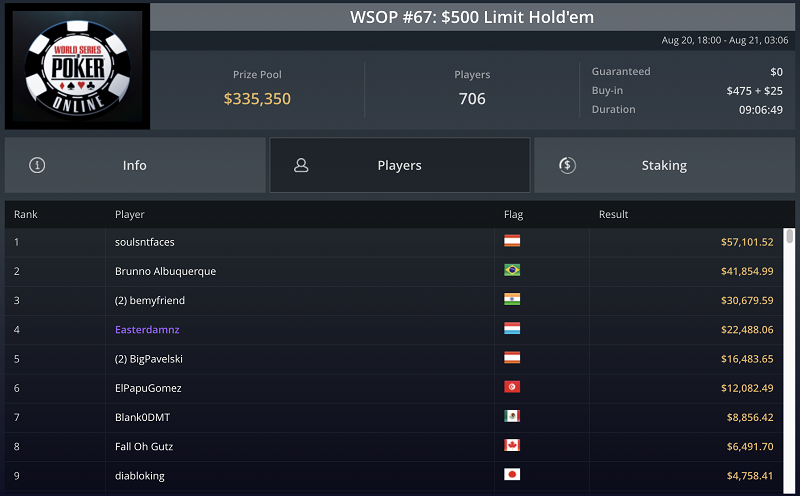 Brazil’s Brunno Botteon had the chance to earn his home country its 5th bracelet of the festival, but it was Gregor “soulsntfaces” Müller who prevailed. Müller has had no cashes in the series so far and only two recorded live cashes, so his win of the top prize of $45,101,52, a coveted WSOP gold bracelet for Event #67: $500 Limit Hold’em and a package for the WSOPE, is sure to be a memorable one.

On Saturday (August 22nd 2020), a bracelet winner will be crowned in Event #68: $500 Deepstack No-Limit Hold’em, and a further three bracelet events will kick off or continue the following day. Event #71: BIG 50 has already surpassed its guarantee of $1 million with several starting days to go, and all survivors returning for Day 2.