Winter is Coming with the WSOP Winter Online Circuit

Poker players from all over the world have the chance to become the 2020 World Series of Poker Main Event champion in the coming days when the international portion of the $10,000 Freezeout will be hosted on the GGPoker Network (GGPN).

The three starting days take place on Sunday November 29th, Saturday December 5th and Sunday December 6th. MTT Satellites kick off at just $5 and Natural8 players can even win their $10,000 seat for free in a special WSOP Main Event Freeroll on November 28th at 12 p.m. UTC.

The cooperation between GGPN and WSOP continues right after that as well, as the WSOP Winter Online Circuit has just been announced with a total of $100 million in guaranteed prize pools! A total of 18 WSOP Circuit Rings will be awarded from December 13th 2020 to January 10th 2021. 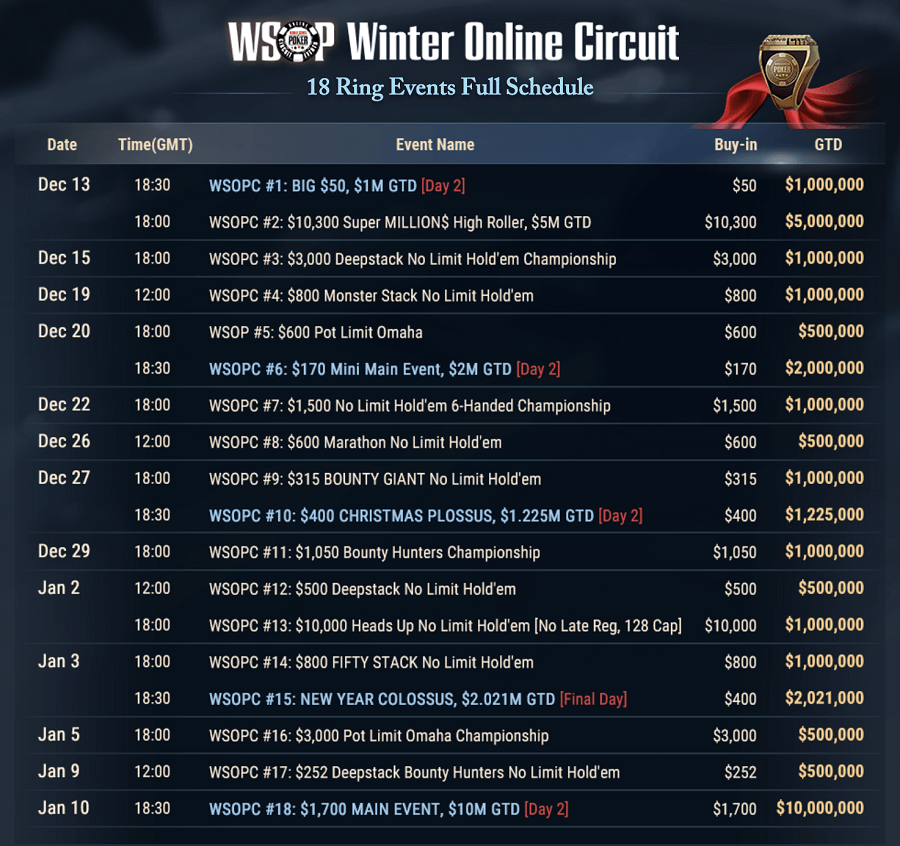 A plethora of Side Events are part of the $100 million overall guarantee and the 18 WSOP Ring Events feature an accumulative guarantee of more than $30.7 million.

On the schedule are three Progressive Knockout Bounty (PKO) Events, three Pot-Limit Omaha Events and 12 No Limit Hold’em Events, each awarding at least $500,000 in prizes.

Two budget events distribute a seven-figure prize pool including Event #1 BIG $50 on December 13th and Event #6 $170 Mini Main Event on December 20th. However, all eyes will be set on the $1,700 Main Event with a staggering guarantee of $10 million.

Plenty of starting days will be available to please the schedule of poker enthusiasts from all over the world. All those that survive will then return to their virtual seats on January 10th, 2021 and the money bubble won’t be far when the action resumes.

WSOP signature events COLOSSUS and PLOSSUS will also return with seven-figure prize pools and play down to a champion just after Christmas and the start of the new year respectively. Additionally, further Championship Events will be part of the schedule including a NLHE Deepstack, 6-Handed, Bounty and Pot-Limit Omaha edition.

Last but not least, the high stakes community can look forward to another special edition of the $10,300 Super MILLION$, which will kick off the festival with a huge guarantee of $5 million on December 13th.

There will also be a $10,000 Heads-Up Event on January 2nd with a cap of 128 entries and no late registration, which is certain to attract some of the biggest names in the world of poker.

Five editions of the $10,300 Super MILLION$ will be streamed as usual in their Tuesday slot and that includes WSOPC Event #2 on December 15th.

Another five Ring Events will be streamed with cards-up coverage and commentary on a security delay, with each of them taking place the following Saturday after reaching their respective final tables (or the semi final in the Heads-Up Event). 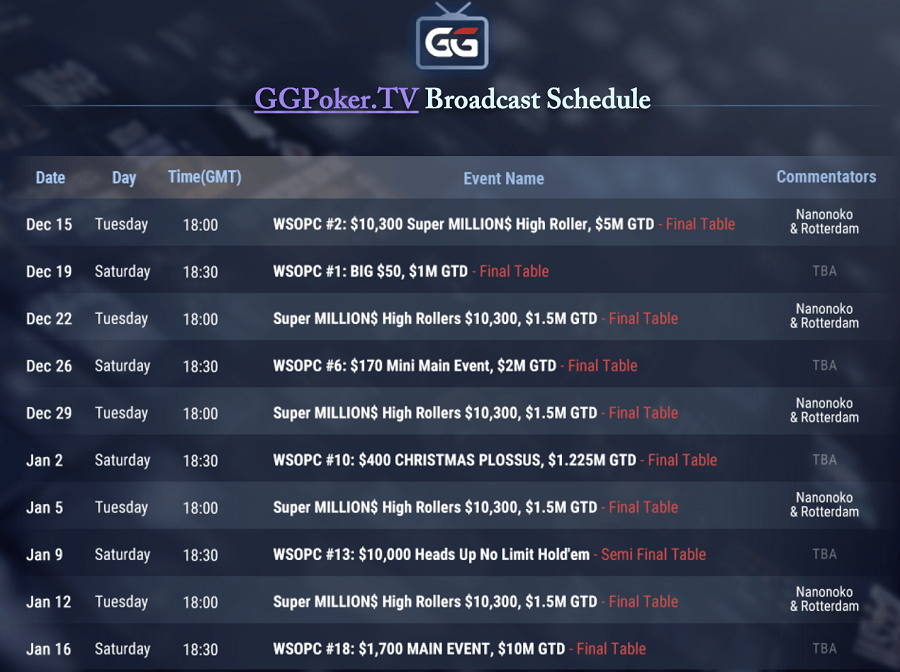 The festival also includes a $100,000 Series Leaderboard based on the usual GGPN tournament formula, with the top 100 players of the series earning a portion of the cash prizes. Points can be accumulated in both the Ring and Side Events.