The first-ever World Poker Tour Asia Online Series has crowned its final five champions on the GGPoker Network (GGPN), of which Natural8 is one of the lead operators. Among the final five were also two Natural8 players, who each took home an additional HK$10,000 (~$1,290) LiveX sponsorship for their efforts.

Kicking off on October 25th, the HK$600 Turbo Poker Open took fewer than five hours in total to whittle down a field of 575 entries to an eventual champion. A total of 80 players took home a portion of the HK$317,400 prize pool, with Hong Kong’s “AKKAdian” ending up as the bubble boy.

Among those to min-cash for HK$1,296.25 were Chi Chung “chipuker” Ho and Hen “GeorgeTheVet” Rosilio, while Kunal “JacKKingOff” made the first pay jump. Natural8 ambassador Pete Chen also made a run for the trophy but came up short in 19th place for HK$2,030.39.

China once again dominated the final table line-up with five contenders; Event #13 champion “bigwhailie” made it the furthest, bowing out in 4th place for HK$21,961.69.

Motoyoshi “falcon8808” Okamura became the third player from Japan to win a trophy this festival, banking HK$55,765.08 and the LiveX live event sponsorship. 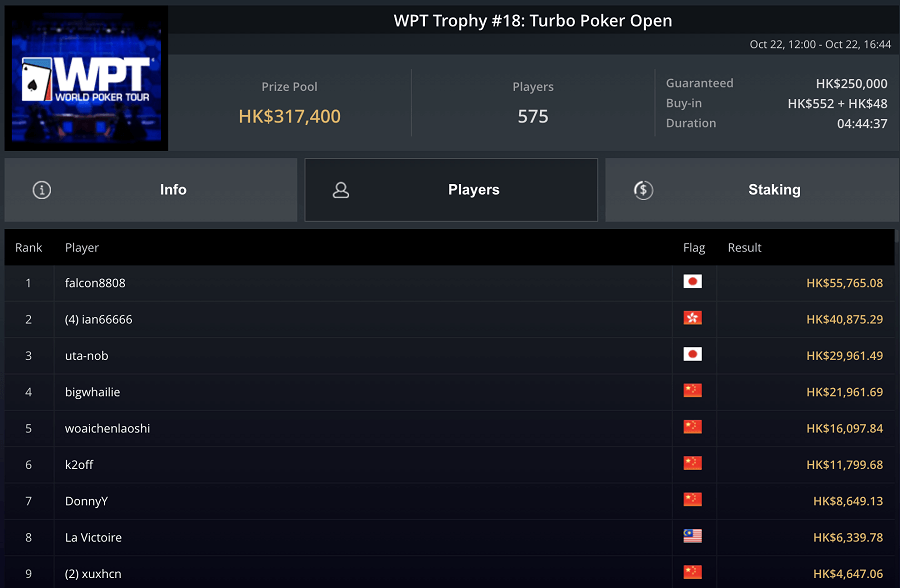 The final tournament to feature a Chinese Yuan buy-in drew a total of 661 entries. The CN¥486,496 prize pool was split among the top 98 finishers, while “jahexotic” and “qingxiaji” received their buy-in back thanks to Natural8’s Early Bird bubble protection feature.

Some notables to finish in the money were Arsh Grover, “DoctorPK”, Gaurav “Haversham” Sood, Vincent “Peleus34” Li, and Yu Chung “WNCouple” Chang. In the end, five players from China and three from Japan made the cut for the final table.

They faced WPT Taiwan champion “Loris51”, who clinched victory once more when queen-jack flopped two pair and rivered a full house to beat pocket kings. For “succhan627”, 2nd place came with a payday of CN¥60,415.91. 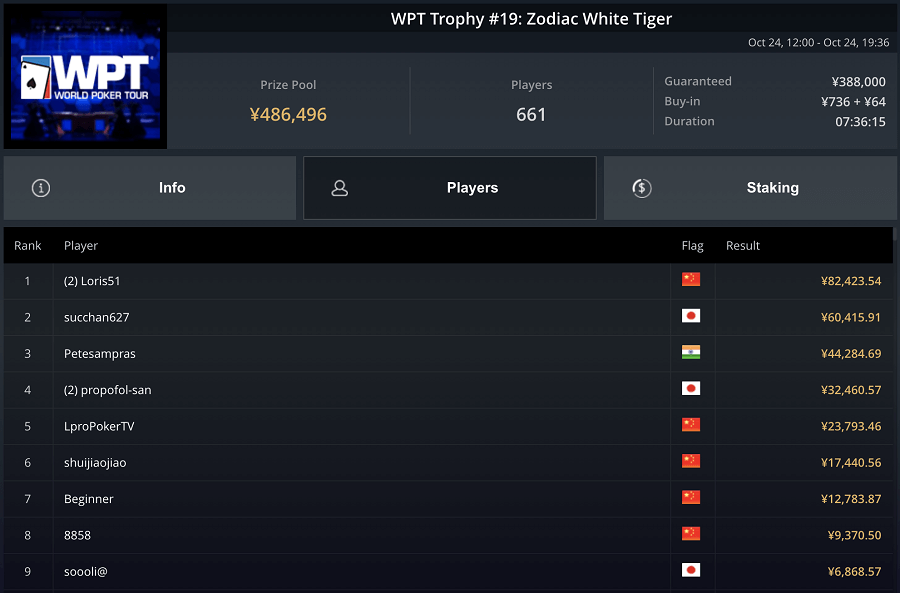 The Early Bird bubble protection feature ensured “FacelessMan” got their buy-in back. “gOATz” then bubbled in 32nd place to secure the min-cash of HK$2,140.35 for all remaining hopefuls.

In heads-up, Turkey’s “rumuzum_1” (HK$34,116.01) and Gaurav “Haversham” Sood (HK$34,405.60) cut a deal. Sood then flopped an eight-high straight to leave his opponent drawing dead, securing the second title of the festival for India. Along with the trophy and top prize, he also claimed the exclusive Natural8 HK$10,000 LiveX sponsorship.

“jahexotic” once again received his buy-in back, thanks to the Early Bird bubble protection feature. Their elimination also ensured at least HK$8,268.39 would be awarded to the remaining 97 contenders.

China and Taiwan dominated the final line-up of contenders with six out of nine players. This also included Natural8 Team Hot ambassador Kitty Kuo, who even held the lead with three players remaining.

Yet another trophy was awarded to China, as “aixin2020” took home the biggest slice of HK$419,163.85 as well as the ninth trophy for their home country. 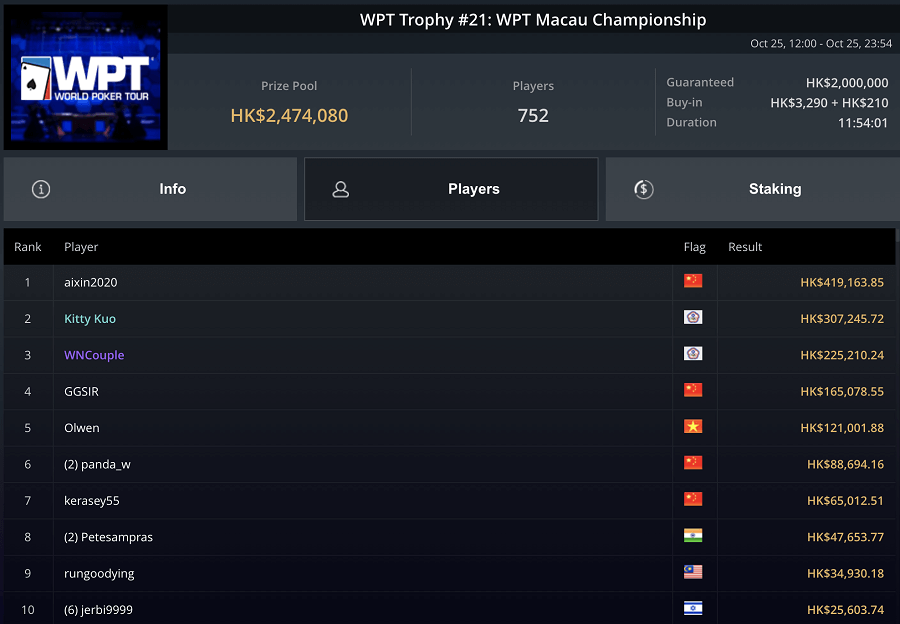 The event most looked forward to was the HK$10,000 WPT Asia Main Event. This multi-flight tournament surpassed its guarantee thanks to 1,256 entries. Only 191 players made the cut out of all the starting days, to battle for a piece of the HK$11,932,000 prize pool.

Two-time champion “Loris51” was in the next batch to claim HK$22,743.84, as did Shyngis “somebodyelse” Satubayev. Kartik “Mandovi” Ved fell outside of the last four tables, and Sriharsha “Upswinger” Doddapaneni missed out on their third final table appearance when they succumbed in 18th place for HK$55,789.31.

At the start of the final table, the two chip leaders faced off in the duel for the biggest prize of the festival and no deal was cut. Shen had built a 5-1 lead over “ming13” and came out on top with king-eight versus ace-trey when the river brought a king. 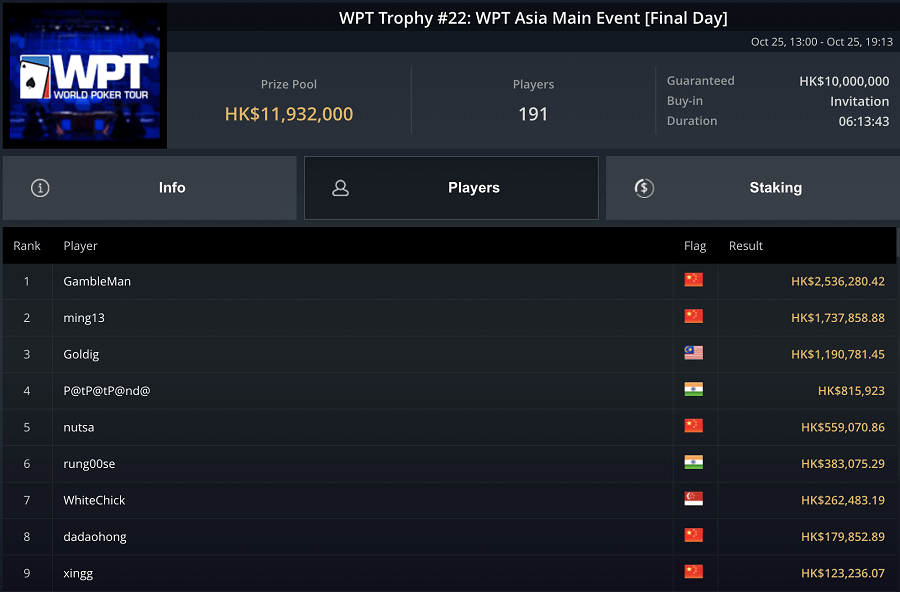 And that wraps up this exciting geo-restricted festival! The next big poker tournament on Natural8 will be the Battle of Malta, with $30 million in guaranteed prizes. With its interesting medieval theme, it will be open to poker enthusiasts from all over the world as of Sunday, November 1st.