The inaugural WPT Asia Online Series has kicked off on the GGPoker Network (GGPN) and as of October 7th, the first five events have played down to a champion. Each winner secured a WPT Online Trophy and earned vital points toward the WPT Nation’s Cup Leaderboard, which features HK$200,0000 in prizes.

All trophy events thus far have surpassed their guarantees, and 22 events now remain.

The popular Beat the Pros Bounty [WPT Edition] tournament kicked off all the action. With a total of 753 entries, it surpassed its guarantee by more than 50 percent. Vietnam and China each saw two of their players make the nine-handed final table, with several well-known players still in contention in the final stages.

Hen “GeorgeTheVet” Rosilio was one of four players who made it all the way on their second bullet, but eventually fell in 8th place for HK$31,863.06. Following suit was the World Series of Poker Online 2020 Main Event finalist Thomas “readytoship” Ward in 6th place (HK$48,017.99). 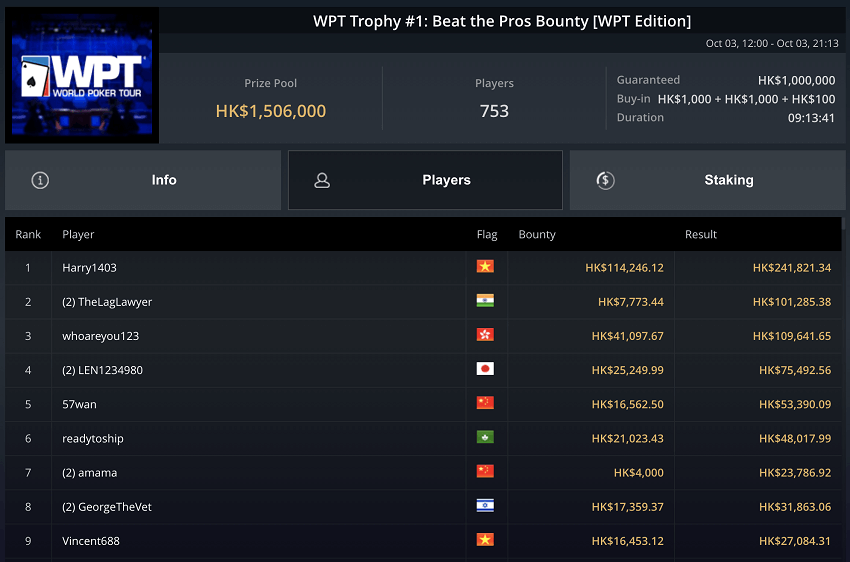 As one of the more expensive tournaments on the schedule, HK$8,000 WPTDeepStacks attracted a moderate field of 222 entries. The top 31 finishers earned a portion of the HK$1,687,200 (~$217,669) prize pool. The last casualty to bow out without anything to show for was Aditya “inonhmeansfu” Sushant. Right after the bubble burst, notables such as Kazuki “8809” Ikeuchi and Beat the Pros Bounty [WPT Edition] finalist Hen “GeorgeTheVet” Rosilio settled for a min-cash.

Heads-up play was between China’s “TriStAnrrr” and a fellow countryperson Zhe “jjsjsjjsj” Feng. The latter eventually notched up victory in style. Feng held pocket tens which eventually turned quads, making the king-high straight of “TriStAnrrr” meaningless. Feng pocketed HK$326,937.29 for their efforts, while “TriStAnrrr” earned a payday of HK$244,255.62. 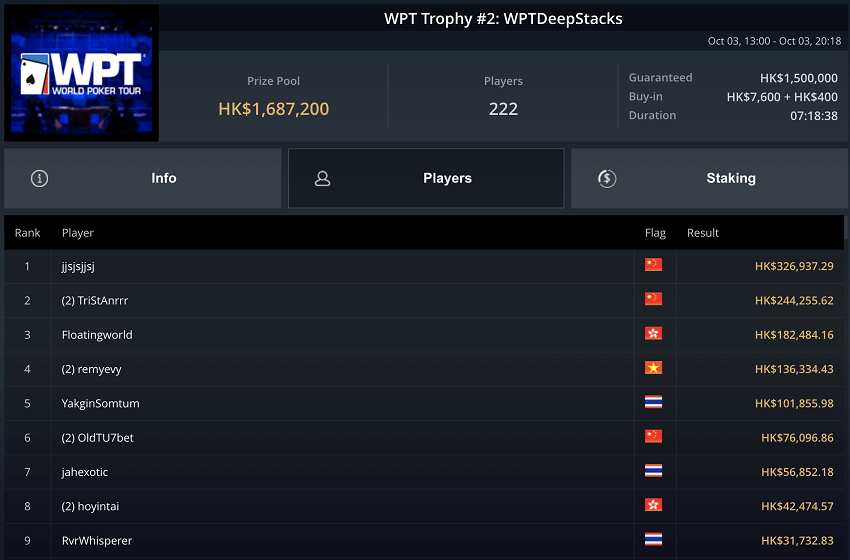 The first of seven National Championships was part of the Super Sunday schedule on the GGPoker Network. Another tournament with an elevated buy-in, the WPT Vietnam Championship came with a VND25,000,000 (~$1,079) entry fee. A total of 316 entrants played for a shot at the trophy and an additional HK$23,000 WPT Passpor, with only 44 players finishing in the money.

One of the notable names on the final table was Arie Muller, who was also responsible for the bubble bursting. Natural8 Team Hot ambassador Thai Ha had another close call in the Championship Event of his home country but bowed out in 10th place.

Six players from China dominated the final table line-up, with “Muchen888” falling in 3rd place with sixes to kings. The rise of Timothy “Technologic” Yim from the bottom stack eventually saw him taking 2nd place. His jack-ten suited flopped an open-ended straight draw but Peiyuan “fish3098” Sun held up with queen-nine for second pair, as the turn and river paired the board twice. 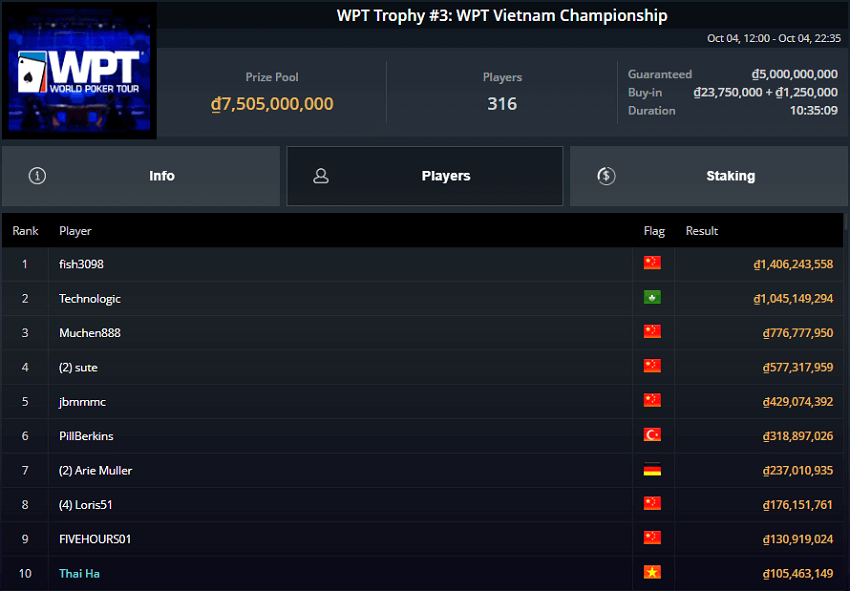 One of the most affordable events on the entire schedule was the WPT300, which allowed players to take a shot at a WPT Asia Online trophy for just HK$300 (~$39). There was a total of 18 starting days and 609 players out of 7,172 entries made the cut. The top 400 spots ended up being paid.

It was a third very deep run for Natural8 Team Hot ambassador Thai Ha, who reached the final two tables for the third time in four events. This turned out to be a 13th place finish, with the final table featuring three players from China and two from Japan. “Alon_Eldar” was the first casualty.

Beat the Pros Bounty [WPT Edition] champion Harry “Harry1403” Duong was in the mix once more and winning would have the made him the first two-time winner of the festival. However, Duong fell in 7th place (HK$41,490.86) to ensure a new winner would be crowned. The next casualty was Hong Kong’s Chi Chung “chipuker” Ho.

The second Championship Event of the festival also smashed its guarantee, as the prize pool more than tripled to KRW467,115,000 (~$403,403) thanks to 298 total entries. It took nearly 10 hours to determine a champion, and China dominated with five contenders among the final nine.

In heads-up, two previous finalists of the festival met in “YakginSomtum” and “Munchen888”. The latter had just finished 3rd in the WPT Vietnam Championship two days prior. In a brief encounter, “Munchen888” pulled into the lead and turned trips with king-jack to beat the ace-queen of “YakginSomtum”. This locked them up the trophy, top prize of KRW87,525,334 (~$75,587) and the HK$23,000 WPT Passport. 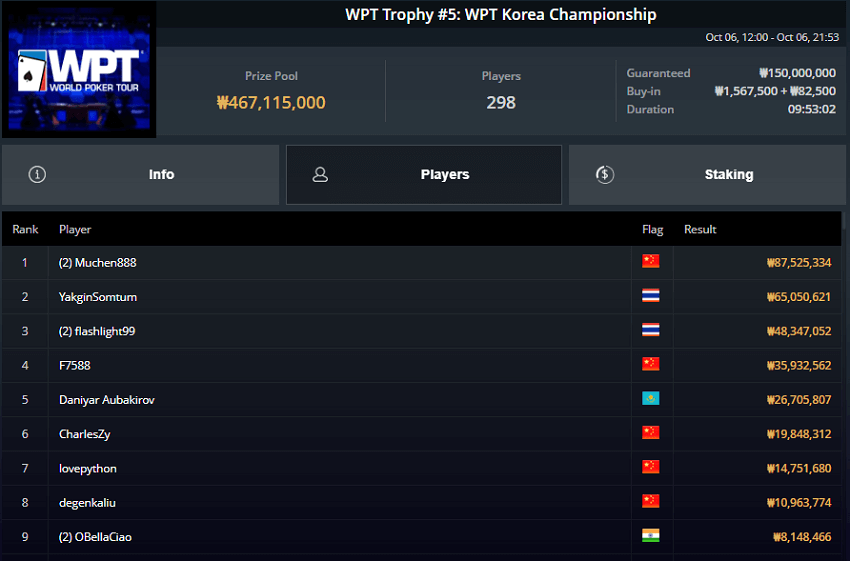 The next trophy event will be Event #6: HK$600 Short Deck Poker Open, followed shortly by two more events including the WPT Philippines Championship. Stay tuned to the Natural8 blog for more updates as they come.