With the ongoing regular tournaments schedule and the recently added Bounty Hunter Series, the action on the GGPoker Network (GGPN) has been jam-packed the last few days. Half time has also been reached for the geo-restricted World Poker Tour Asia Online Series, and it’s time to take a look at the latest winners. 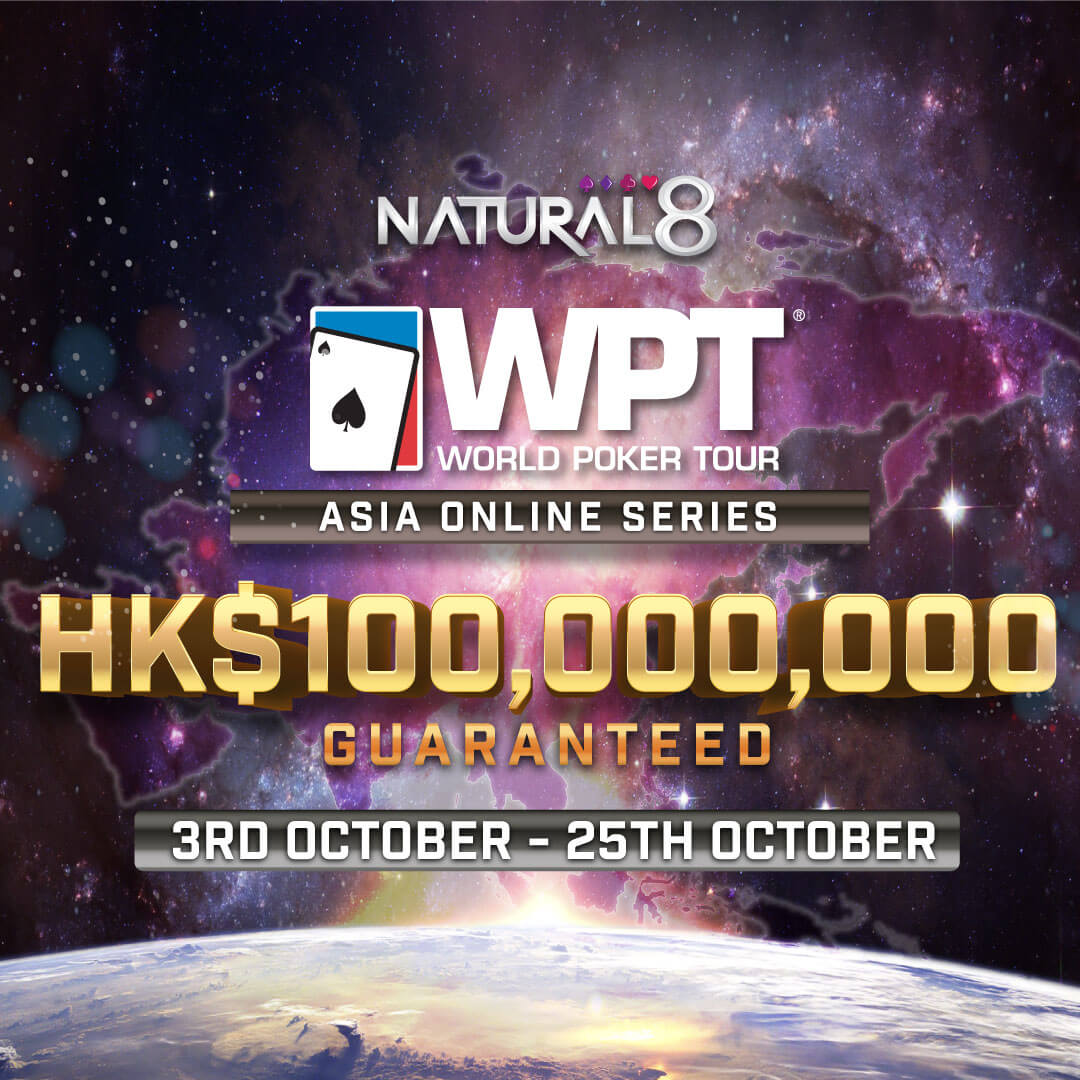 As one of the mixed games on the schedule, the Short Deck Poker Open came with a moderate buy-in of HK$600. It attracted 340 entries, easily surpassing its guarantee and ultimately paying HK$187,680 to the top 47 finishers. Wilson “@FickleFoxx” Lim was the last casualty before the money, and from then on the eliminations kept pouring in.

Many Chinese players were in contention, as well as Israel with Hen “GeorgeTheVet” Rosilio and “humusman” bowing out just shy of the final table. Shota “shorta222” Nakanishi was the first casualty among the final nine, and other notables such as Timothy “Technologic” Yim (HK$13,797.90) and Yoo Sin “KangStar89” Kang (HK$18,780.56) came close to victory but hit the rail in 4th and 3rd place respectively. 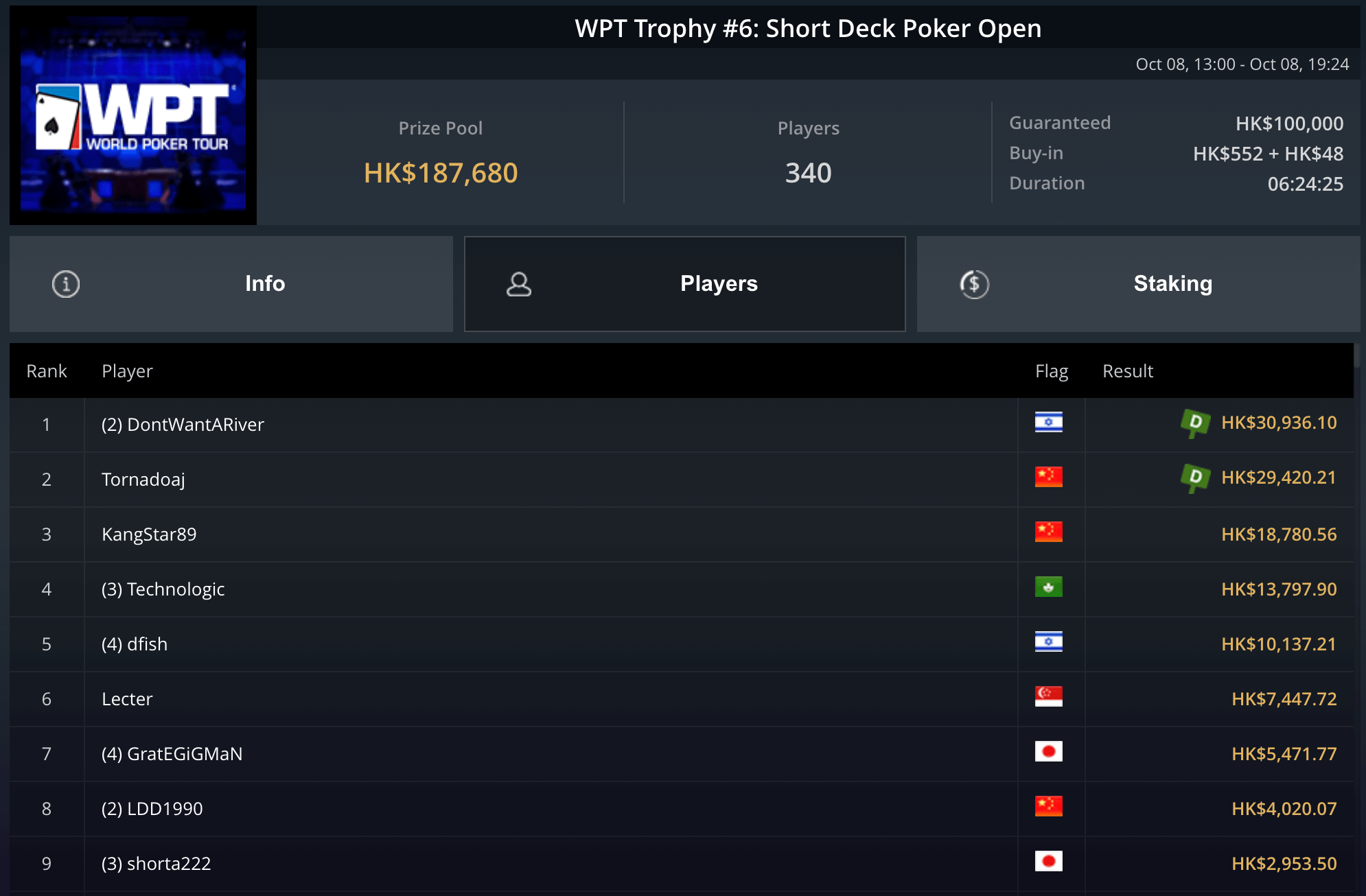 China dominated the late stages of the Shooting Star Bounty Event, which drew a total of 697 entries. Featured player Yu Chung “WNCouple” Chang reached the final two tables but succumbed in 13th place. Yaoming “MY G63” Huang was the first to fall when the field combined for the last time.

With the eliminations of “DiKehTRoaN” and “Jimy T”, five contenders remained. Xiaosong “zgheinan” Zhu doubled into the lead with a minor chip disadvantage, with flush versus two pair and making it to heads-up against “AlanYao”. Zhu eventually flopped trips with nine-deuce held against a flushdraw, to crown them the champion for CN¥110,993.43. 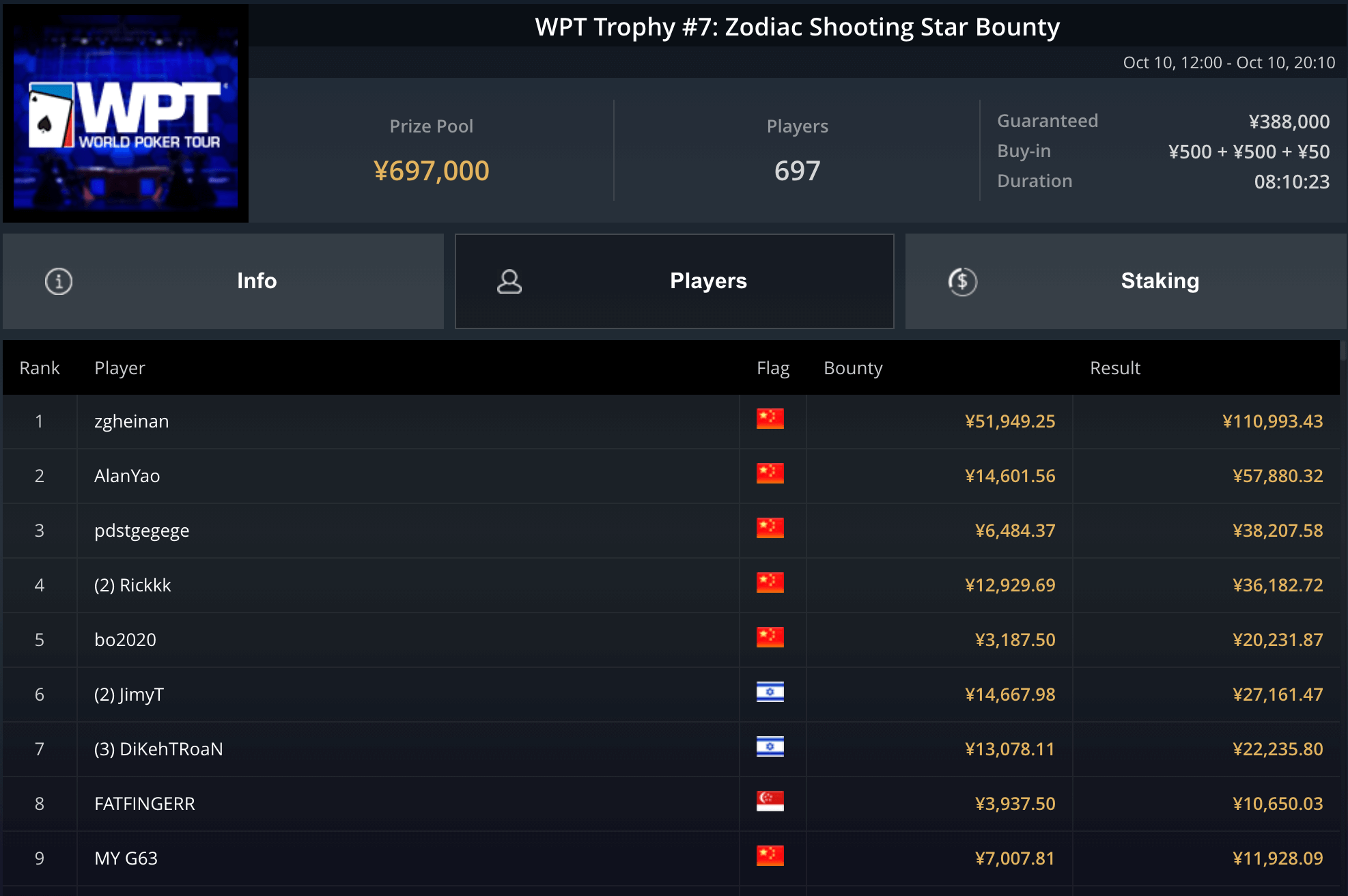 It took just over four hours to determine a champion in the Pot Limit Omaha Event, which just about met its guarantee of HK$100,000. Another country added their name to the winner’s list, as Singapore’s “clockmaker” eventually accumulated all the chips.

The top 39 spots were paid, and some of those to walk away with a profit were Ram “TheLagLawyer” Kakkar, Ho Yin “hoyintai” Tai and Chi Chung “chipuker” Ho.

By then, “clockmaker” already had a decent lead over all contenders and proceeded to knock out six opponents en-route to victory. They cut a deal with Ozan “PillBerkins” Ogmen in heads-up, with the latter making their second final table appearance in this series and ultimately finishing in 2nd place for HK$16,578.75. “clockmaker” earned the trophy and top prize of HK$16,661.47, when kings up and a flushdraw rivered a full house for good measure. 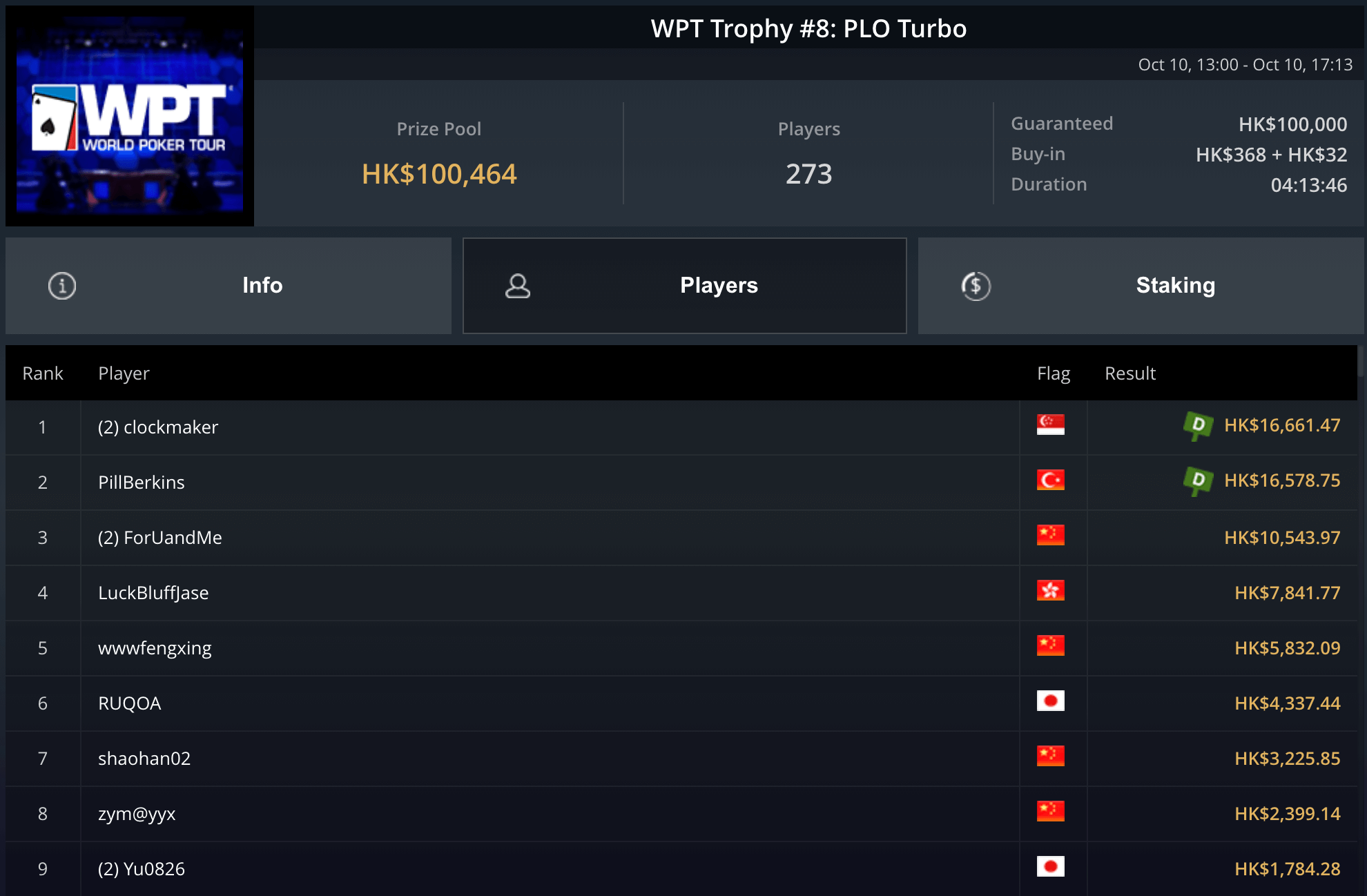 The third of six Championship Events took place on Sunday, and once again attracted a decent field of 215 entries to surpass its guarantee by more than 50%. Koray “KakiTee” Turker, who was recently announced as a streamer for GGPoker, came up two short of the money while Timothy “Technologic” Yim bubbled in 32nd place.

Johan Haugen, Daniyar Aubakirov, Joshua “thefreshest” Mccully, Dicky “Floatinworld” Tsang and Ravid “jerbi9999” Garbi were all eliminated prior to the final two tables. Mohaiman Ashrafee, Peiyuan “fish3098” Sun and Kong Keat “HoneyFunny” Ng made it one step further, but also headed to the virtual payout desk before the final nine.

The two chip leaders at that point were Kartik “Mandovi” Ved and Abhivav “ObellaCiao” Iyer, holding more than three times as many chips as their closest competitors. Huu Dung “remyevy” Nguyen was the first to bust, leaving Mario Mosboeck to start his rise with a double against Iyer. 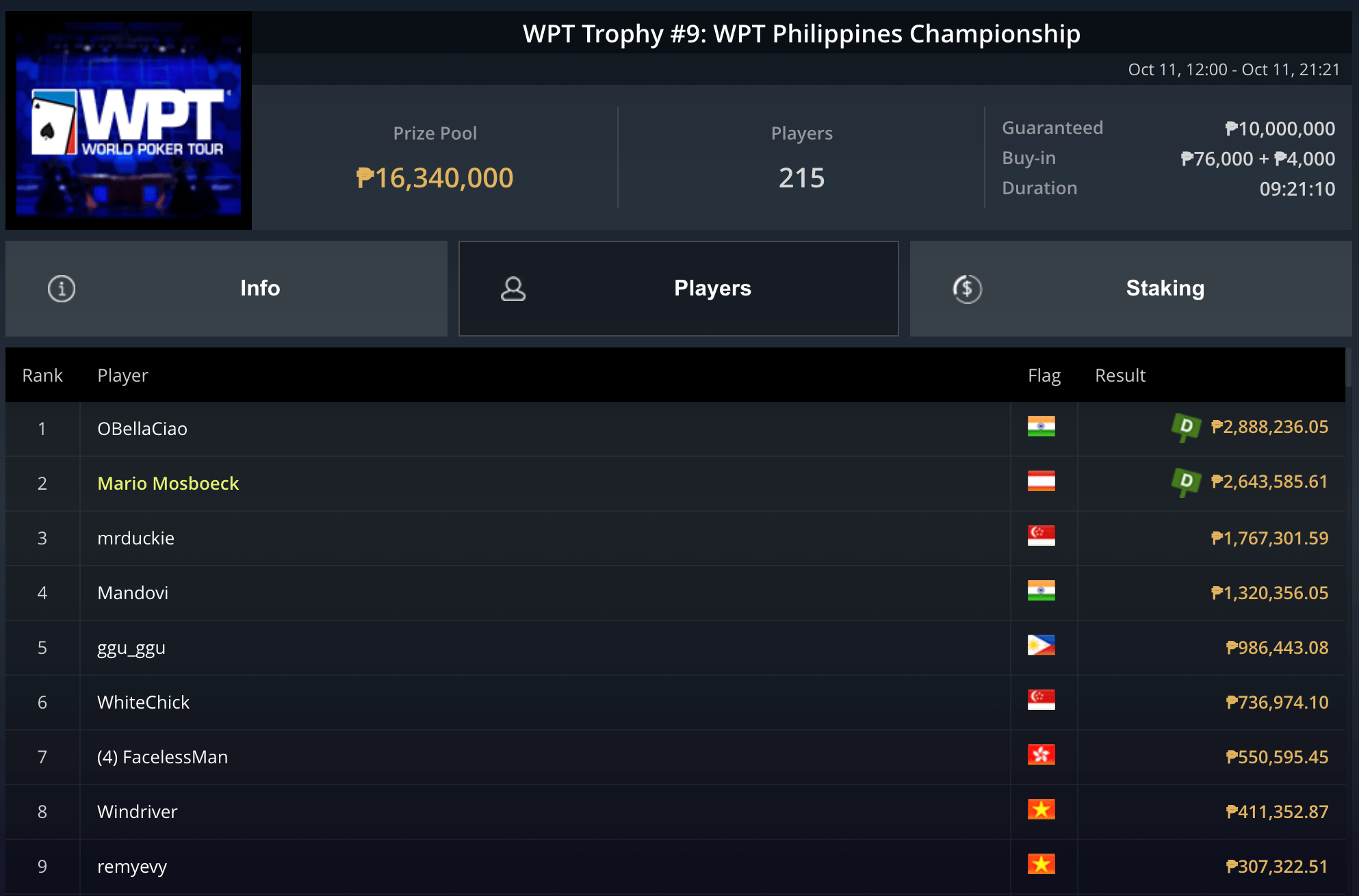 2019 WSOP bracelet winner Iyer was also the second player to win an exclusive Natural8 LiveX sponsorship worth HK$10,000 for his win. 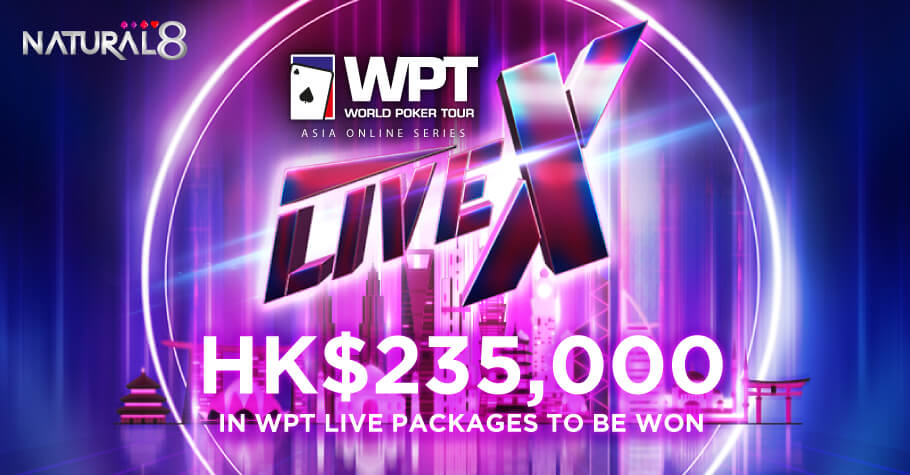 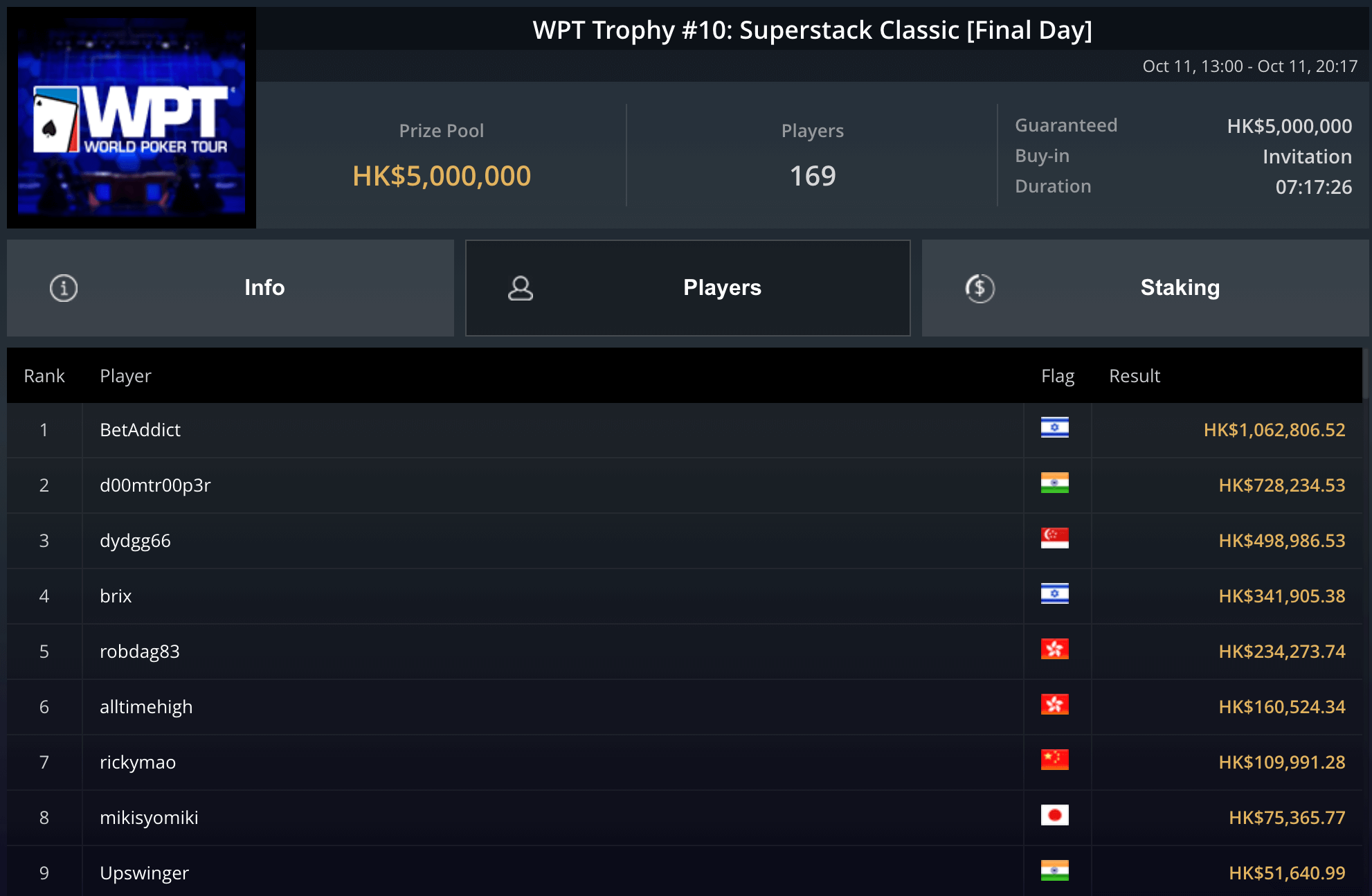 Huu Dung “remyevy” Nguyen was denied their third final table of the festival when he finished in 10th place. Harry “Harry1403” Duong on the other hand, achieved that feat on his second entry and made it to 7th place for NT$265,060.80. The second final table appearance of Sriharsha “Upswinger” Doddapaneni resulted in a 3rd place finish (NT$909,758.68).

China’s “Loris51” then held a dominating chip advantage over fellow countryman Lili “austin” Zhuang, sealing the victory in two heads of heads-up when the superior kicker prevailed on a ten-high flop. Zhuang took home NT$1,238,287.42 while “Loris51” was rewarded with a payday of NT$1,685,452.54. 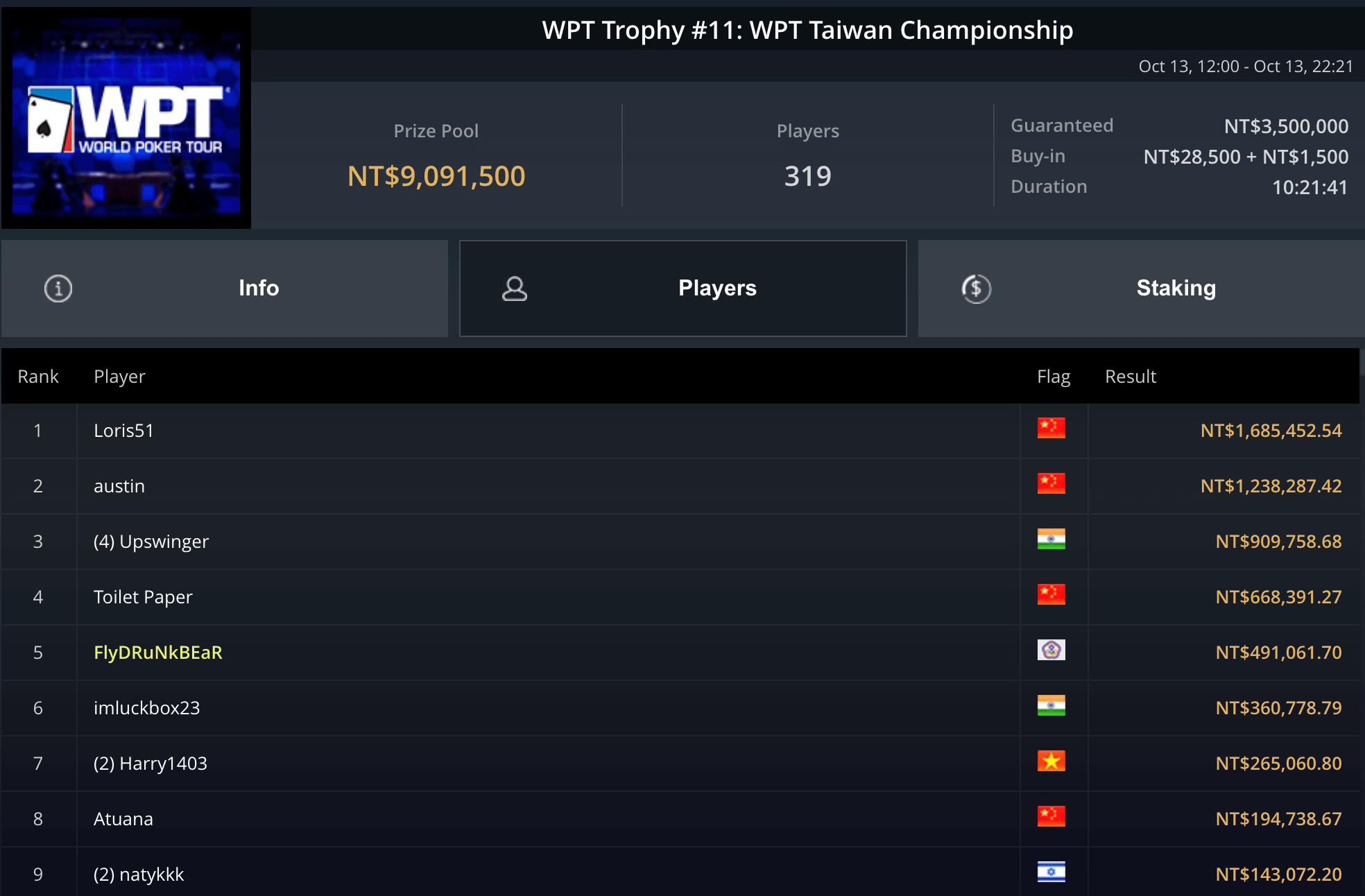 The first of three Nation’s Cup Leaderboards saw China in the top spot, with 1,037 eligible players earning a seat in the HK$50,000 invitational freeroll. It was won by “btones1” for HK$7,350.29. The next weekly leaderboard has already commenced and will run from October 11th to 17th.

Mario Mosboeck may have missed out on a WPT Asia Online Series trophy, but he had two decent scores in the High Roller Side Events on October 11th. He prevailed on a fourth bullet in the 8-Max HK$5,000 event out of a field of 68 entries for HK$82,381.85. 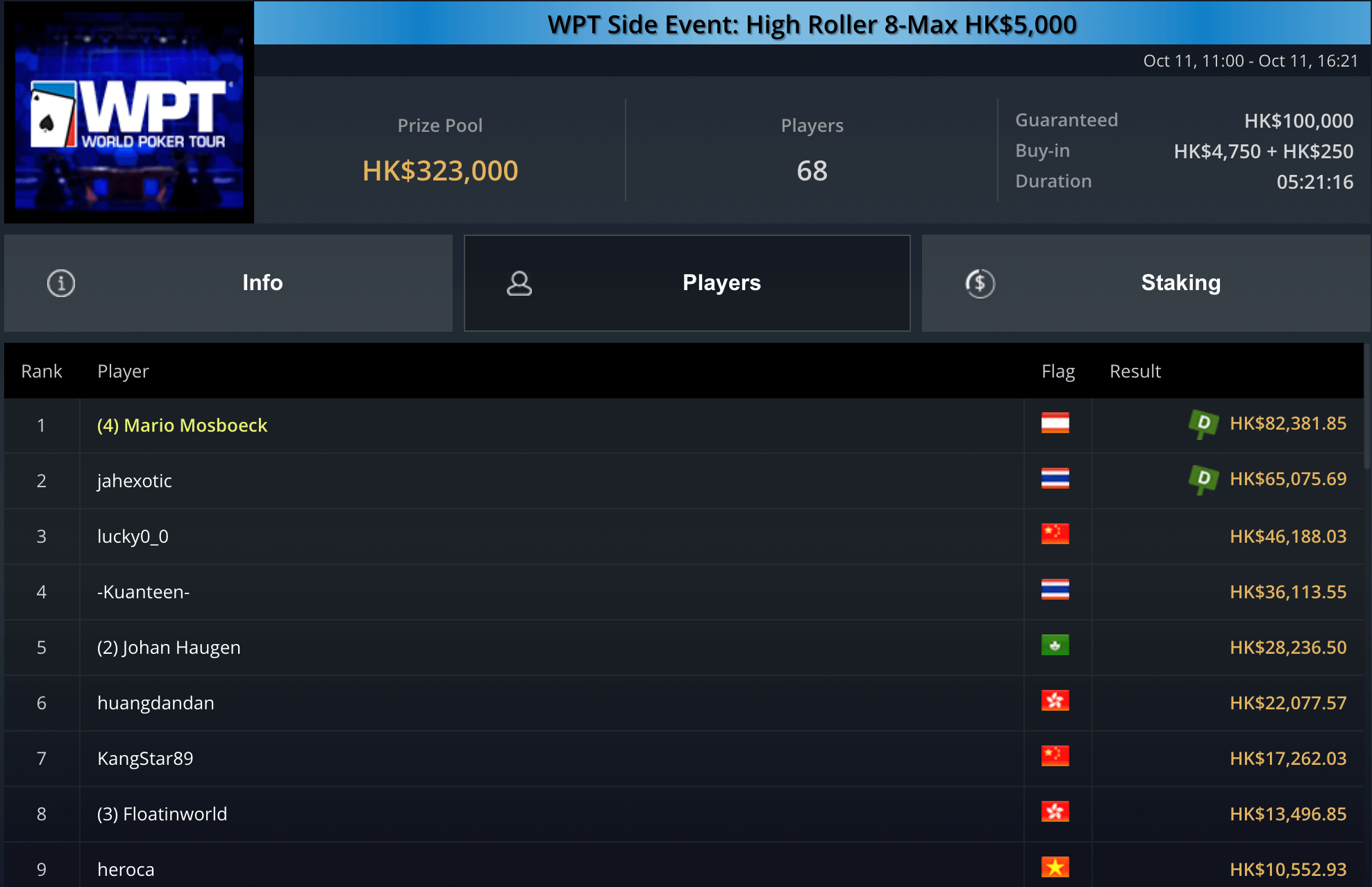 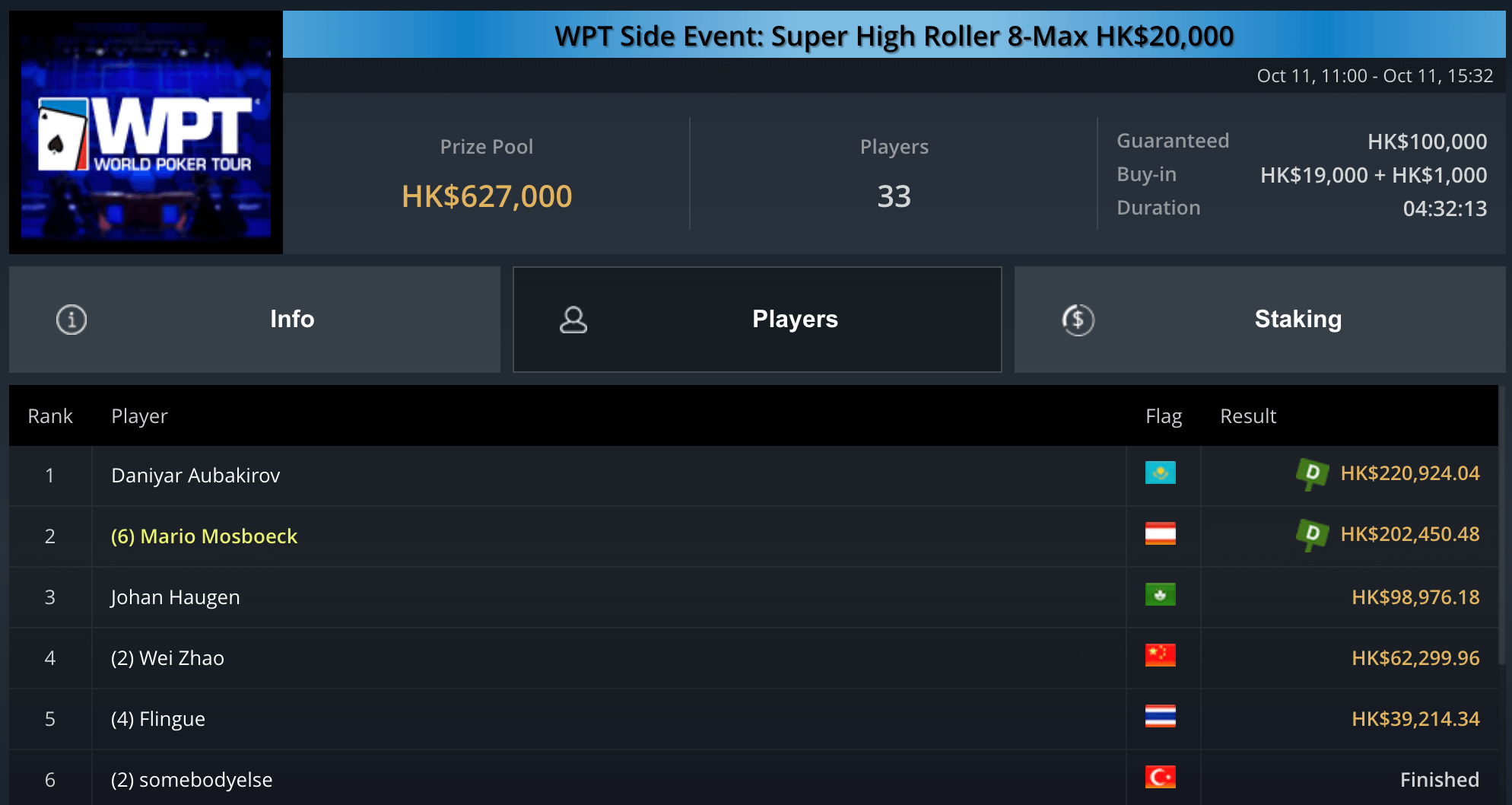 The starting days of the WPT Trophy #16: WPT Asia Mini Main Event are already underway, with the tournament featuring a buy-in of HK$1,000 and a HK$5,000,000 guarantee. The next trophy will be awarded in WPT Trophy #12: 6-Max Poker Open, featuring a HK$600 buy-in. A further four WPT Asia Online Series events will take place over the next weekend, including the WPT Cambodia High Roller Championship.