It was a very successful week for Natural8 in the World Poker Tour Asia Online Series on GGPoker Network (GGPN), as three players earned trophies and LiveX sponsorships. Thanks to this Natural8-exclusive promotion, the trio will receive HK$10,000 to spend in any event once the live poker scene opens up again.

As one of the more affordable mid-week tournaments, the 6-Max Open attracted a field of 725 entries to surpass its guarantee. Japan’s “punch_dai” and “yamake” ended up as the last two players without anything to show for. The top 98 finishers all took home at least HK$1,337.47 for their efforts.

Three players from China, the country to win the Nation’s Cup Leaderboard in the first week, made the cut but “excellect” and “qujin520” fell in 9th and 6th place respectively. “jfc81n” from Japan finished in 4th place, while Renle “li_xiaolong” Lin took home HK$36,429.35 for his 3rd place finish.

Fellow Taiwanese player “Lettuce_bro” made it one spot further and collected HK$49,699.17 but it was China’s “Walter-White” who prevailed, earning the trophy and top prize of HK$67,802.96. 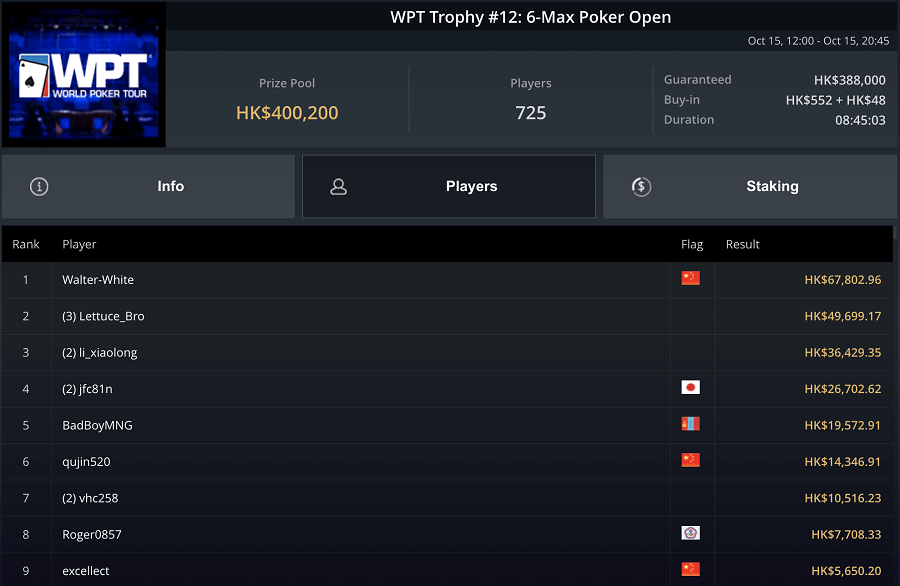 Out of a field of 612 entries, the top 89 spots were paid. “LeeUJJJ” received their buy-in back thanks to the Early Bird Bubble Protection feature, and it was Natural8 Team Hot ambassador Pete Chen that ended up as the bubble boy.

A number of Chinese players secured points for their country in the weekly Nation’s Cup Leaderboard. Ke “mufengpoker” Song missed the final three tables by a few spots, as did Hong Kong’s Vincent “Peleus34” Li.

Three players each from India and China reached the nine-handed final table, as well as Singapore’s Marvin “TheCrippler” Tay who fell in 5th place for CN¥22,623.40.

The bronze medal and payday of CN¥42,106.85 went to Rajat “Oye Como Va” Sharma, leaving “Lucus Chou” and “bigwhailie” to battle for the next title of the series. It was the latter that prevailed, claiming the trophy for China and adding CN¥78,370.18 to their bankroll. 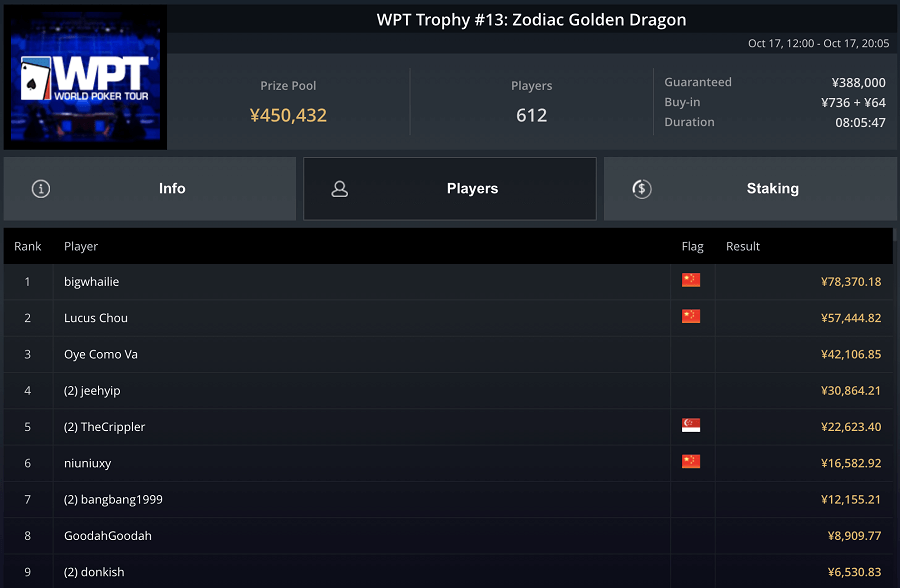 The very same day also featured one of the mixed games of the festival: a Pot Limit Omaha Bounty Event with a buy-in of HK$525. A progressive bounty of at least HK$125 was awarded for each knockout, with a portion of the buy-in going to the cash prize pool.

A total of 290 entries came up just shy of the guarantee. The top 39 spots earned cash prizes, with many others walking away with bounty prizes.

Two-time WSOP bracelet winner Anson “Tara@0z” Tsang saw his bid for a WPT trophy cut short in 23rd place for HK$2,529.62, while “ninja_gators” was the last player to depart without a bounty prize, pocketing HK$942.26 for their 14th place finish. 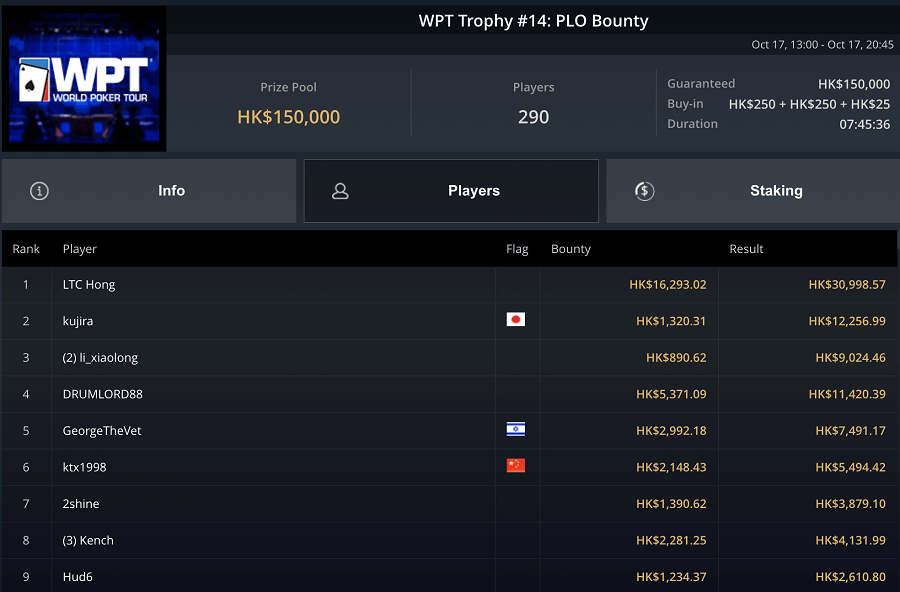 The most expensive trophy on the entire schedule kicked off on Sunday, but the $3,500 WPT Cambodia Championship brought no joy to Anson “Tara@0z” Tsang and Natural8 Team Hot ambassadors Pete Chen and Kitty Kuo, who all failed to reach the top 13 spots out of a field of 98 entries.

WSOP Online 2020 bracelet winner Ravid “jerbi9999” Garbi entered the final table as chip leader after firing three entries, but had to settle for 3rd place and $47,335.56. Harry “Harry1403” Duong continued his strong performance and had an opportunity to become the festival’s first two-time champion, but eventually came in 2nd and cashed for $62,503.52.

This meant it was Natural8 Team Hot ambassador Kosei Ichinose who walked away with the trophy, top prize of $82,531.85 and the HK$10,000 LiveX sponsorship. 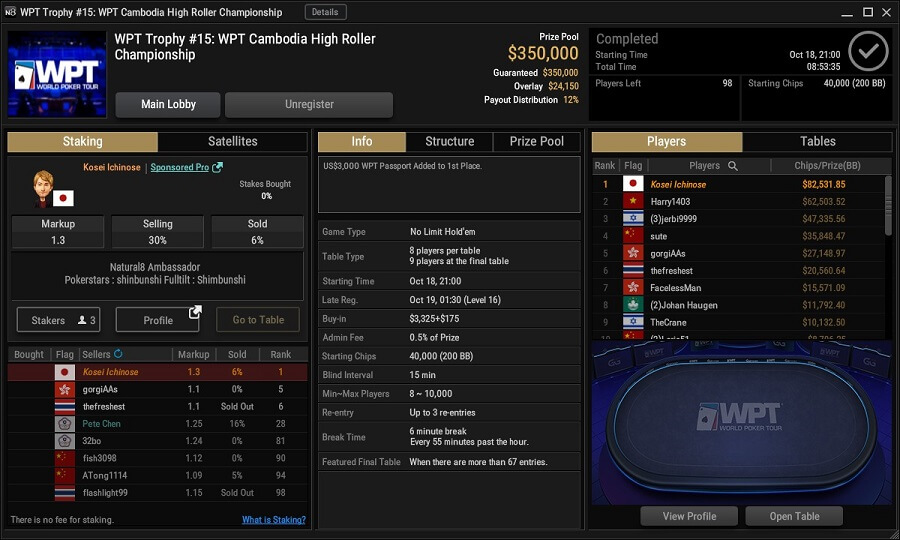 A huge field of 4,727 entries whittled down to 574 survivors in the second multi-flight tournament of the festival, with the HK$1,000 WPT Asia Mini Main Event having a small overlay for its guaranteed prize pool of HK$5,000,000.

Featured player Zhai “xiaoyuanlian” Chunjing finished in 501st place, locking up a min cash of HK$2,632.27 for all those still in the running.

Kosei Ichinose cashed once more, albeit for just HK$3,762.09 in 239th place. Nethanel “natykkk” Klein recorded another deep run and finished in 14th place, while Aditya “inonhmeansfu” Sushant became the first casualty on the final table. Kunal “JacKKingOff” Patni bowed out in 6th place for HK$122,061.62.

The final three players cut a deal, and Thailand had hopes of earning their first title of the festival. Unfortunately, “jahexotic” (3rd place for HK$588,459.85) and Mark “RvrWhisperer” Kohner (2nd place for HK$546,347.40) came up just short of victory.

Instead, it was Taiwan’s Jung Chou “DragonChou” Chen who earned the biggest slice of HK$606,515.01 and the trophy. He also became the next player to scoop the exclusive Natural8 LiveX sponsorship worth HK$10,000. 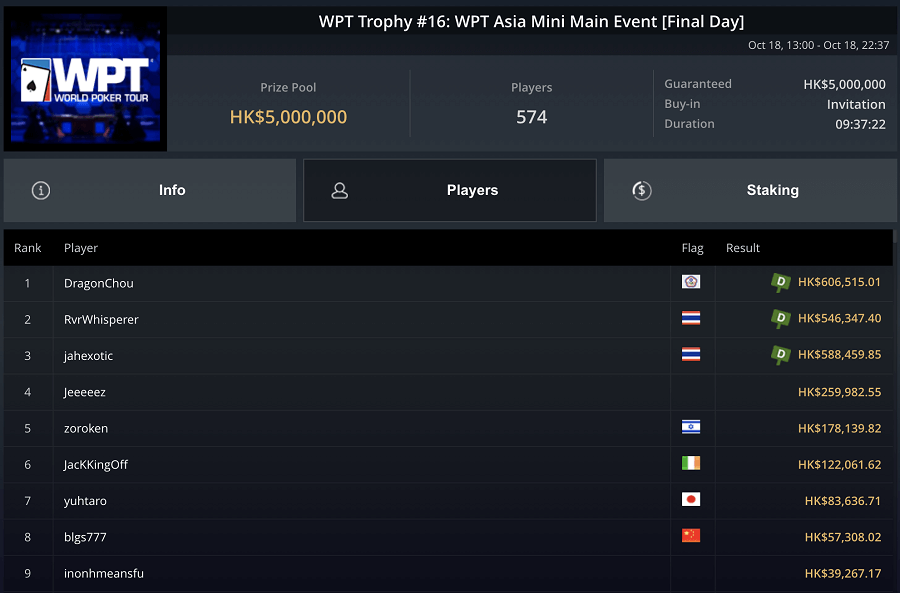 Aubakirov and Satubayev shared HK$323,000 in prizes in one of the HK$20,000 PLO Super High Rollers. Aubakirov also notched up another victory the following day. The Kazakh and former WPT Amsterdam Main Event champion cut a deal with Johan Haugen to cash for HK$143,952.57. Haugen earned HK$158,527.43.

The fifth and penultimate pinnacle event to happen on October 20th will be the JPY30,000 WPT Japan Championship. Another five trophies will also be up for grabs until the end of the festival on October 25th. All eyes will surely be set on the HK$3,500 WPT Macau Championship and the HK$10,000 WPT Asia Main Event, both of which will play down to a winner on the final day.