The inaugural World Poker Tour Online Championships (WPTOC) on partypoker has just wrapped up a few days ago but the next highlight of the renowned brand is just around the corner on the GGnetwork with an exclusive festival dedicated to the Asian poker community.

Spanning over more than two months in total, the entire festival featured a total of 12 Championship Events which all included three tiers. Five players walked away with five-figure prizes:

A deal was cut in all three of these events and the biggest payday went to the UK’s Phil Mighall who came out on top in Event #8: $10,300 Main Event after defeating Teun Mulder in heads-up. Mighall came out on top of a 1,011-strong field and also earned an entry to the next WPT Tournament of Champions, as well as a place in the exclusive Champions Club.

Mikita Badziakouski defeated fellow partypoker pro Jason Koon in heads-up of Event #10: $25,500 High Roller Championship, which came with a top prize of $1,062,730. The event drew a total of 199 entries and Koon’s runner-up finish was rewarded with a payday of $810,869

Last but not least, the final Championship Event of the festival saw the biggest names in the online and live poker world square off in Event #12: $102,000 Super High Roller Championship. Out of a field of 40 entries, only seven players reached the final table and the top six finishers were guaranteed a portion of the $4 million prize pool.

Among them was also the UK’s Charlie Godwin, who earned her seat through a $109 satellite. While coming into the final day as the shortest stack, Godwin secured three double ups and instead it was Daniel Dvoress who ended up as the bubble boy. First to bust in the money was Christoph Vogelsang, followed by Linus Loeliger and Sergi Reixach.

Short stack Godwin laddered up all the way to third place and she eventually bowed out to Michael Addamo when her ace-deuce came up short against ace-six. The first spot on the podium in one of the toughest high stakes competitions awarded a payday of $620,000 to Godwin. In heads-up, Addamo cut an ICM deal with Isaac Haxton, leaving an additional $30,000 and the title up for grabs. In a rollercoaster battle it was Addamo that came out on top to earn the trophy.

With live poker on a hiatus for all major brands, the action continues in the virtual arena and the biggest festival geared specifically for the Asian poker market will commence in a few days on Natural8 and other skins of the GGnetwork.

Eight iconic WPT Asia destinations will be included as part of the festival from October 3rd to 25th with a total of 22 Trophy Events scheduled, which features HKD$100 million in guaranteed prize pools.

All seven of the regional Championships - WPT Vietnam, WPT Korea, WPT Philippines, WPT Taiwan, WPT Cambodia, WPT Japan, WPT Macau – will award a HK$23,000 WPT Live Event Passport to the winner. The final day of the HK$10,000 WPT Asia Main Event on October 25th then wraps up the festival with a bang thanks to a guaranteed prize pool of HK$10 million. 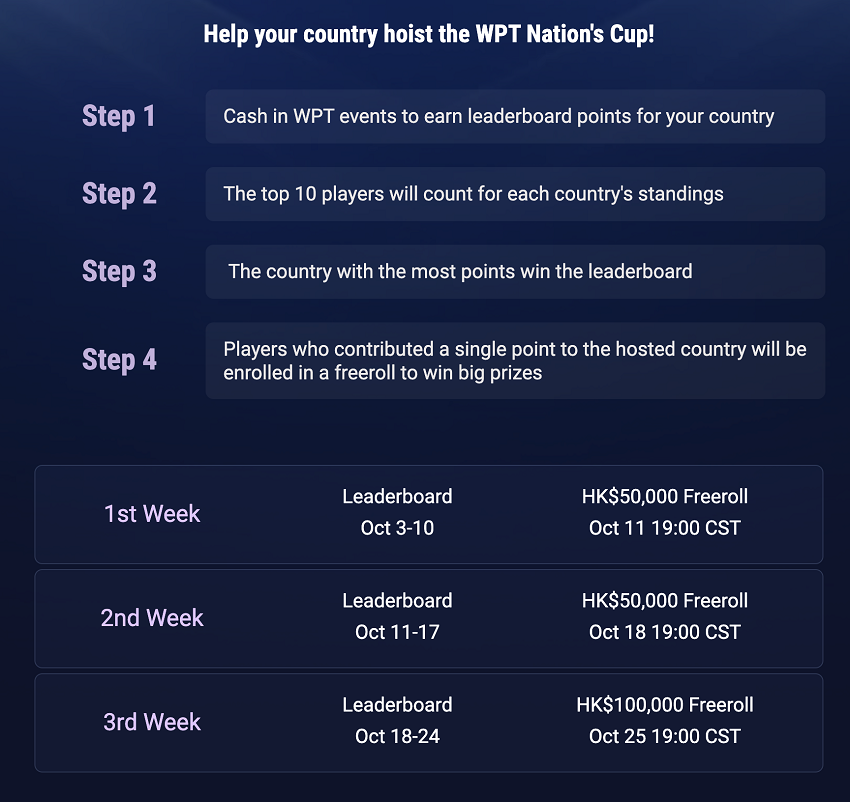 And one of them knows exactly what it takes to win a WPT title – Pete Chen emerged victoriously in the 2017 WPT Beijing $3,500 Main Event after defeating a field of 400 entries to claim the top prize of $299,485. It is one of many trophies in the cabinet of the Taiwanese poker pro, who regularly returns home with silverware when attending poker events.

“The WPT Champion’s Club trophy is definitely a special part of my collection and I look forward to try and win another WPT trophy in the next few weeks on Natural8. I hope many will join us to compete in the tournaments and represent their country for the Nation’s Cup Leaderboard!” - Pete Chen