This past week on the GGNetwork saw another four players winning their maiden gold bracelets in the inaugural World Series of Poker Online 2020. The most expensive tournament of the entire series came to its conclusion, and the Natural8-exclusive Team Bling line-up received an additional member. Let’s take a closer look at the four finished events:

One of the popular mid-week tournaments on the schedule among top pros and aspiring amateurs alike was Event #73: $1,000 NLHE 6-Handed, which attracted a decent field of 2,202 entries. Only the top 314 spots secured a portion of the $2,091,900 prize pool and it would take more than 13 hours until a winner was crowned.

Anant “MisterPro” Purohit went from one of the chip leaders to eventually finishing in 9th place, and the UK’s Patrick “Muddington” Kennedy missed out on his second bracelet of the festival after becoming the next casualty. There were still several high-profile players in contention, but Markku “ExVang” Koplimaa, Ivan Luca and Portuguese online grinder Jorge “bemjogadogg” Abreu all eventually departed.

This led to the heads-up duel between Endrit “YOUWILLLOSE” Geci and Jim “grousegrind” Lefteruk. Geci’s apt nickname came true for all but one opponent, as he jammed king-ten into the pocket jacks of Lefteruk, who held a big lead when the chips went in preflop. Only one ten appeared and Geci had to settle for second place and $223,977.85. Lefteruk earned bragging rights, the WSOP bracelet and a top prize of $299,510.85. 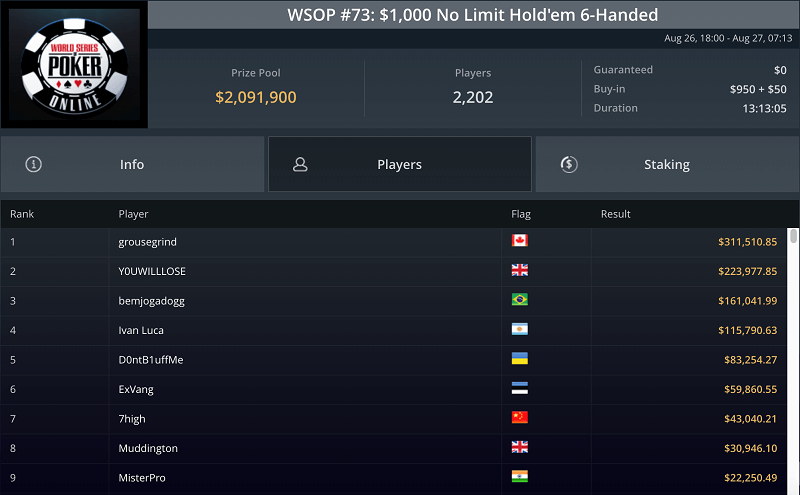 Four Natural8 players made the nine-handed final table and took home decent paydays. Add to that several known pros and two players gunning for their second bracelet of the festival, making this showdown in the great game of PLO even more exciting.

The first Natural8 player to depart was Johannes “Yohan96” Toebbe, who took home $17,533.70 for his efforts. High Roller regular Sean Winter fell next, and Frank “Sbma2016” Crivello bowed out in 7th place as one of the two former champions. Crivello invested a lot of chips preflop with kings and Thi “HoneyandTHI” Truong turned a set to deal the final blow and establish a commanding lead.

Fellow Natural8 players Kyle “johnmarbles” Bowker (6th place for $45,877.55) and Joao “naturalMENTE” Simao (4th place for $87,113.78) were joined on the rail by Laurynas Levinskas in 5th place, leaving just Truong in contention for the Team Bling sponsorship. She knocked out Simao and his fellow Brazilian Dante Goya to go heads-up with Enrico “GTOExploiter” Camosci, and with a big lead. Camosci was unable to overcome that disadvantage and missed out on his second bracelet, walking away with a payday of $165,414.32 as runner-up. 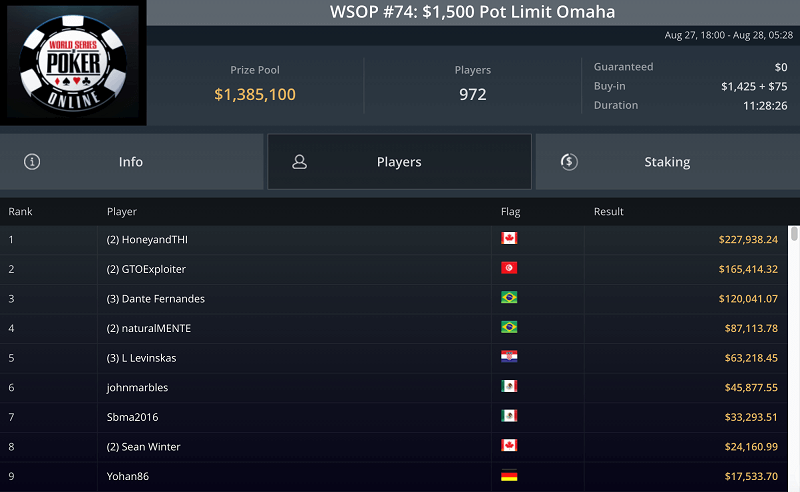 Truong’s top prize of $215, 938.24 and coveted gold bracelet was further sweetened by a $15,000 sponsorship package courtesy of Natural8, as part of their exclusive Winner’s Circle promotion. Truong is the 8th player to join Team Bling, and that number may still grow with the festival continuing until September 6th.

The tenth and final tournament which counted towards the Asia Time Zone Events Leaderboard came to a conclusion this past Saturday, with the popular Event #75: $300 Double Stack NLHE. A total of 3,552 entries generated a prize pool of $991,008 and a very international final table line-up emerged with eight different countries represented.

It was a bumpy ride with many ups and downs along the way, as the winner was crowned after 11 hours and 45 minutes. By then, notables such as Michael “H3R0” Acevedo, Ivan “Negriin” Vilchez, Blake “Beast2018!” Bohn, Anton “storytellerA” Morgenstern, Maximiliano “TheChosen1” Veyga and Francois “Merqrial” Evard were all sent to the rail on the final few tables.

Mario “xxmmarioxx” Mosboeck was among the chip leaders for a long time, but then lost a huge flip with ace-king versus queens. The Austrian was unable to recover from that and missed out on the final table by finishing in 11th place. Seungmook “7high” Jung then bowed out to let the remaining field combine to one table.

Perhaps the biggest name was the first to fall, as Connor Drinan ran out of chips almost immediately. Spanish pro Paul “Pistolero99” Lozano made it a few spots further and exited in 6th place, while Emanuele “BudSpencer” Monari and Trygve “FullSendWig” Leite never surrendered the top two spots.

They would face heads-up for the title and Leite remained in the driver’s seat throughout the battle that lasted nearly an hour. Eventually, all the chips went in when Monari rivered two pair with queen-eight suited. Leite had checked and snap-called with ten-nine for the nut straight to earn the top prize of $130,099.98 and the gold bracelet. Monari walked away with $101,292.01 in the runner-up spot. 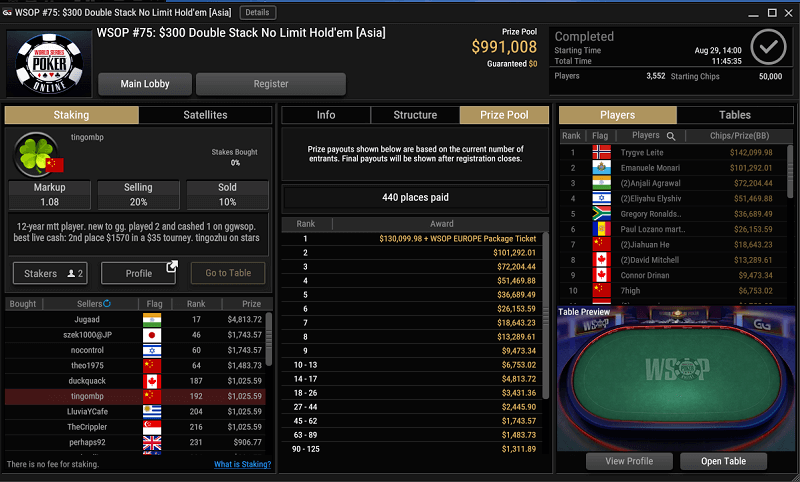 With that, the Asia Time Zone Events Leaderboard wrapped up, and it was Natural8 Team Bling member Luis “Xapilskinha” Assuncao Garla who remained in the top spot. Nick “rdcrsn” Maimone came close but ultimately finished second. Other notables in the top ten included Roberto Romanello, and Garla’s fellow Team Bling members Paul Teoh and Anson “Tara@0z” Tsang. Garla will receive a unique Gold Dragon for his trophy cabinet, the first of its kind to be awarded in the online series. 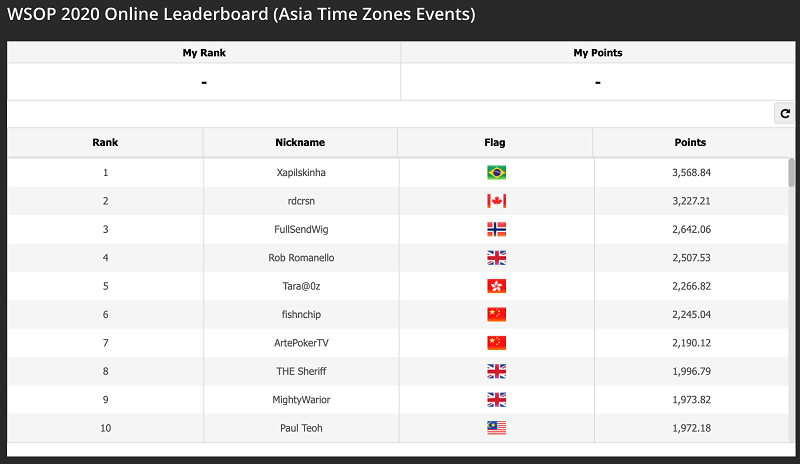 Unlike its namesake live event in Las Vegas, Event #70: $25,000 NLHE POKER PLAYERS CHAMPIONSHIP was solely played in the No Limit Hold’em format and the ambitious guarantee of $10 million was all but reached thanks to 407 total entries. The event had played down to the final nine and then resumed six days later with live stream and cards-up coverage.

Two Natural8 players were left in the mix, including Paulius “ChickenBBQ” Plausinaitis and Jason Koon, the latter of whom returned with the biggest stack for the final table. Plausinaitis finished in 8th place ($210,079) and Koon ($285,808) was the next casualty after having previously doubled Chris “Big Huni” Hunichen in a big pot.

German high roller and Austria resident Christian Rudolph soared to the top after eliminating Brunno Botteon, Aram “Pusha T” Zobian and Aleksejs Ponakovs to reduce the field to the final three. Hunichen then knocked out Shankar “Saquon” Pillai with ace-king versus ace-nine and entered heads-up nearly even in chips.

However, from then on it was all about Rudolph who decimated the stack of “Big Huni” to all but five blinds. Hunichen was ahead preflop in the final showdown with king-queen versus queen-ten but a ten appeared on the flop.

As the second event to award more than $1 million to at least two players, Hunichen walked away with $1,332,097 for his efforts. Rudolph found redemption from a previous runner-up finish to Michael Addamo at the World Series of Poker Europe, and scored his first bracelet along with a sweet $1,800,290.