Another three coveted WSOP gold bracelets have been awarded for the inaugural WSOP Online 2020 on GGNetwork, and among those to shine was Finnish legend Juha Helppi who has featured on televised poker for years.

Helppi got his first bracelet last year in Vegas, topping a field of 118 entries in Event #72 $10,000 Limit Hold’em Championship and walking away with $306,622. This year saw him win his second bracelet from the comforts of his home. He overcame a tough final table in Event #35 $5,000 Pot Limit Omaha Championship to claim the lion’s share of a $1,558,000 prize pool.

Natural8 Team Hot member Thai Ha had a deep run on his third bullet and finished 11th for $20,872.37. Three former WSOP champions also reached the final table and secured themselves at least $24,641.32 for their efforts. Recent WSOP Circuit ring winner Alex Difelice was one of three players who handed over their chips to Jens “98snaeJ” Kyllonen, who then bowed out in 5th place after having previously doubled fellow countryman Helppi.

The final two saw an action-packed battle between Helppi and former EPT Barcelona runner-up Jesus Cortes. The Spaniard pulled into a commanding lead but Helppi flopped top set twice, claiming the top prize of $290,285.58 and walking away with his second gold bracelet. 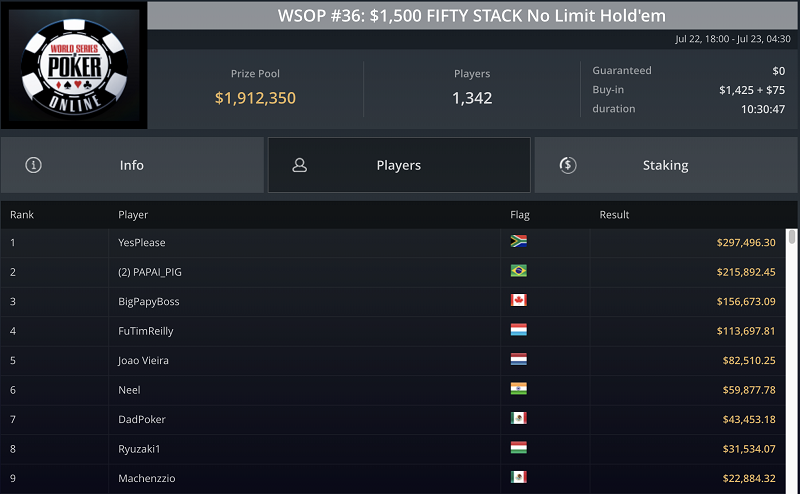 As the field was cut down rapidly, further notable names such as Ami Barer, Bernardo Dias, Samuel Vousden, Mike McDonald, and Jeff Gross departed. The 2014 WSOP APAC bracelet winner Sam Higgs made it to 25th place, followed by Daniel Colopys and Sergey Rybachenko.

At the final table, 2019 WSOP bracelet winner Joao Vieira and Martin Zamani were the biggest names left in contention. Vieira had to settle for 5th place when he jammed ace-seven suited into the ace-jack of Rodrigo Caprioli. A seven on the flop gave hope for more, but the jack fell on the river. Zamani was sent to the rail next and suffered a very similar fate, when his ace-nine suited was dominated by Caprioli who held ace-jack once more.

Olivier Rebello saw his hopes of a maiden WSOP bracelet slowly diminish, after he lost a flip with ace-jack suited against Michael “YesPlease” Clacher’s fives. This led to a heads-up duel with the two nearly even in chips. Unfortunately, as good as Caprioli ran until then, the Brazilian could not get anything going in heads-up. His shove with a missed straight draw was snap-called by Clacher with two pair on the river, giving Clacher the win.

It was the third gold bracelet for South Africa in the history of WSOP, and Clacher earned a juicy payday of $297,496.30, surpassing his career-earnings on the live poker circuit more than ten-fold. Brazil’s Caprioli took home $215,892.45 for his runner-up finish. 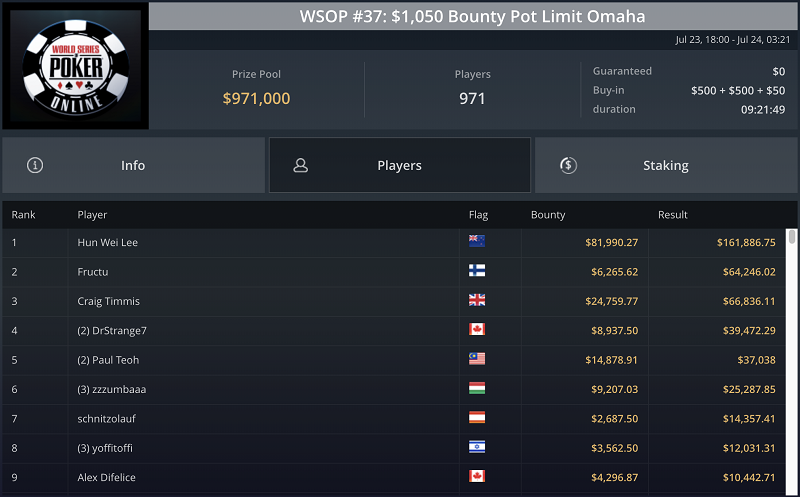 The second Pot-Limit Omaha tournament of the festival came with a twist as Event #37: $1,050 Bounty Pot Limit Omaha featured the progressive knockout format to further increase action at the six-handed tables. 971 entries boosted the prize pool to $971,000, with 134 spots paid.

After nearly nine and a half hours, it was PLO cash game specialist Hun Wei Lee that had accumulated all the chips. Canada’s Alex Difelice reached back-to-back final tables but had to settle for 9th place, adding yet another deep run to his online poker resume of the last few months. With increasing bounty prizes, UK’s Craig Timmis ramped up the aggression and his stack.

Down to the last five players, Lee assumed control to gain a huge advantage and subsequently knock out the final four opponents. His top prize of $161,886.75 was split almost evenly in cash and bounty prizes to showcase the domination fashion in the late stages of the tournament.

On top of that, Lee was also one of two Natural8 players (the other being fifth-place finisher Paul Teoh from Malaysia) at the final tables. Thanks to his victory he became the second member of Team Bling, earning him a $15,000 Las Vegas Package (as part of the exclusive Natural8 WSOP Winner’s Circle promotion).

A stellar field of 2,007 entries emerged in Event #38: $600 Monster Stack 6-Max, the first event of the festival with an Asia-friendly start time. A prize pool of $1,143,990 was formed, and five Asia players reached the nine-handed final table. After a session of 10 hours and 41 minutes, it was China’s Aaron “fishnchip” Wijaya who had all the chips.

The event saw a topsy-turvy final table, in which Wijaya started in the middle of the pack while well-known poker pros Kasper Mellanen, Blake Bohn and Joao Simao were at the top of the leaderboard. Bohn was second in chips when he three-bet jammed pocket jacks into the pocket aces of Mellanen in three-way action.

Singapore’s Jingxiang Ong ended up in fourth place and Mellanen’s run ended in third, which set up the heads-up duel between Wijaya and Toni “AnsuFati31” Bosch Jordana. For some 15 minutes, the lead swung back and forth before it all came to an end in setup fashion. Wijaya turned a full house with king-seven suited and Bosch Jordana did so with the inferior eight seven, as the remaining chips went in after a blank river.

As the festival heads into the second Super Sunday, an astonishing six bracelet events will take place. It all gets underway with Event #39: $1,500 No Limit Hold’em, the second Asia Time Zone Event and which awards points towards the Asia Player of the Series leaderboard. Four-card lovers will join the action for Event #40: $2,500 Pot-Limit Omaha, and all Day 1 survivors of Event #41: $400 COLOSSUS and Event #42: $400 PLOSSUS will return to their seats and play down to a champion.

Last but not least, the previously postponed Event #32: $100 The Opener and Event #33: $1,111 Every 1 for Covid Relief (Caesars Cares) are also part of the schedule. Four of the tournaments will determine a winner tonight whereas Event #40 & #41 will stop once the final table is reached.