We’ve reached the half-way point in the World Series of Poker Online 2020 festival, and just over three weeks remain for players all over the world to take their shot at the coveted gold bracelets. From August 11th to 13th, three events on the GGNetwork played down to a champion, with Brazil seizing yet another victory.

One of the most popular tournaments of the entire schedule among the High Roller regulars was Event #58: $5,000 No Limit Hold’em 6-Handed Championship. It attracted some of the biggest names of the international poker circuit, with a field of 672 entries and a prize pool of $3,192,000 shared among the top 98 finishers. 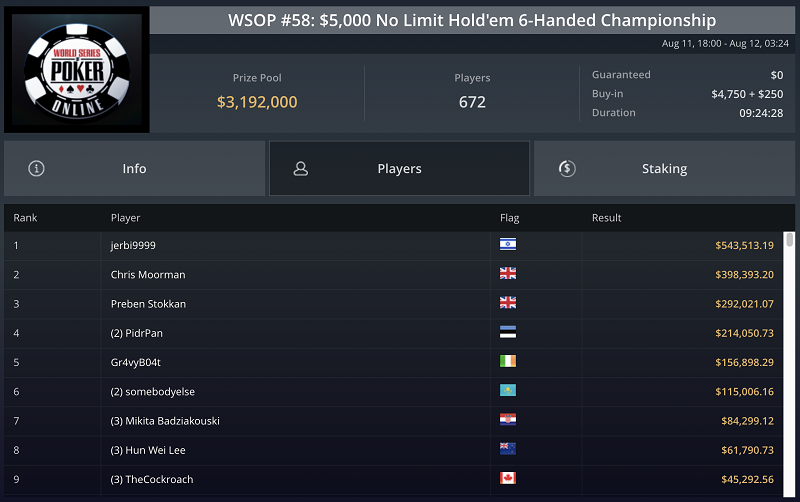 Daniel Negreanu also earned a portion of the prize pool while yet another of his deep runs came up short of the final table. Negreanu ended up in 39th place and was followed by other familiar names such as Sean Winter, Sami Kelopuro, Elio Fox, and Luke Schwartz. Close to the money bubble, Davidi Kitai, online streamer Michiel “Easterdamnz” Van Elsacker and Francisco “VaPaCooler” Benitez all hit the rail.

It was an expected star-studded final table line-up with Hun Wei Lee, Mikita Badziakouski, Shyngis “somebodyelse” Satubayev, Ludovic “Gr4vyB04t” Geilich, Preben Stokkan and Chris Moorman, but all came up short of victory. Instead, it was Israel’s Ravid “jerbi9999” Garbi who claimed his first bracelet and by far the best tournament cash so far at $543,513.19. Online legend Moorman was denied his second WSOP bracelet as he had to settle for runner-up and a sum of $398,393.20.

Schein, Lee, Badziakouski and Satubayev all recorded their second final table appearances of the festival, with Lee being the only Natural8 player among the finalists. He finished in 8th place for a payday of $61,790.73 and was one of three players to make the final nine on their third and final tournament entry.

Brazil has had plenty of reason to celebrate this WSOP festival, having already had numerous finalists, three runner-up finishes and three winners. In Event #59: $2,500 Double Stack No Limit Hold’em, a fourth champion for the South American stronghold emerged when Leonardo “Babaehduro” Mattos topped a field of 1,061 entries.

The top 152 spots were guaranteed a portion of the $2,519.875 prize money, with Mattos receiving the lion’s share at $399,046.75. On top of that, the Brazilian also received a package for the World Series of Poker Europe. 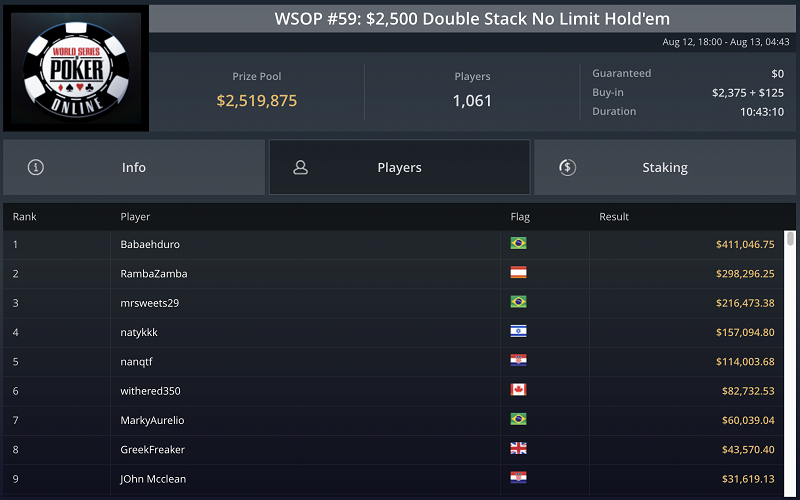 One player that he may very well face there is runner-up Christopher “RambaZamba” Puetz, who boosted his bankroll with a cash of $298,296.25. Puetz was on the verge of victory with his aggressive play in heads-up, but Mattos doubled twice to then deal the final blow with king-high versus nine-high when the chips went in preflop.

Another two Brazilians reached the eight-handed final table including third-place finisher Pedro “mrsweets29” Madeira ($216,473.38) and 7th place finisher Fabiano “MarkyAurelio” Kovalski ($60,039.04). Britain’s Yiannis “GreekFreaker” Liperis became the first casualty on the final table and walked away with $43,570.40. On the final table bubble, Daniel “Razer2311” Rezaei and Manuel “JOhn Mcclean” Saavedra were eliminated on separate tables to bring the field from ten to eight.

It was another WSOP event with a cash for Daniel Negreanu, as he bowed out in the early money stages soon after the bubble had burst. On the final few tables, notables such as Dante Goya, MILLIONAIRE MAKER runner-up Caio “Ez4ENCE” De Almeida, Jeremy Wien, Ezequiel “lafiera8” Waigel and Gab Yong “genbengLee” Kim all departed before the final table was set.

Two countries: Estonia and Lithuania, won their maiden bracelet during this WSOP festival. The third to follow is Turkey in Event #60 $525 Bounty NLHE 6-Handed, which drew a large field of 3,170 entries for a total prize pool of $1,585,000.

Orhan “yirtil” Ates had already enjoyed success on the live poker tables previously, and all but matched his best score when he was the last man standing. Ates netted a payday of $180,177.51; $65,593.11 of which came as a result of keeping his progressive bounty. It was a sweet victory as it not just his first gold bracelet, but also the first for Turkey. 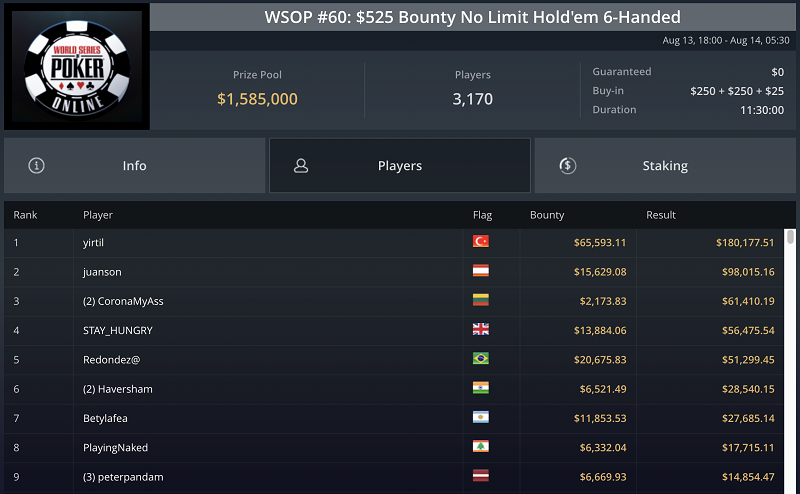 Ates needed to improve several times to accumulate all the chips. One of his victims was Renato “Songonku” Ribeiro on the final table bubble, as Ates got there with running diamonds for a flush to beat a flopped set of sixes. Hakim ran with tens into the kings of Ates and found no help; Caique “Redondez@” Sanches was then ousted by Ates who rivered a straight against a flopped set of aces. Ates finally came back in heads-up and cracked aces once more when his queen-ten hit a queen on the flop and river.

On the money bubble, Galen Hall and Zachary Korik were among the four players to receive their money back thanks to the Bubble Protection for events with a buy-in of less than $1,000. The eliminations after that came at an incredibly fast pace as the field raced towards the final table. It was yet another cash for Daniel Negreanu and he was joined in the payouts by Simon Lofberg, Joao Vieira, Conor Beresford, Ryan Riess, Pascal Hartmann, Belarmino De Souza, Shawn Buchanan and Juha Helppi. Natural8 Team Hot member Kitty Kuo recorded her deepest run of the festival so far and was eliminated in 28th place.