Yet another Super Sunday has wrapped up, with three players earning their maiden WSOP bracelets in the World Series of Poker 2020 Online on the GGNetwork. Among these winners was the third champion for Brazil, who won the title by playing on Natural8 and earning himself a $15,000 Team Bling sponsorship.

After nearly 13 hours on the final day of Event #55: HK$8,000 NLHE Asia Championship, Brazil’s Luis “Xapilskinha” Assuncao Garla walked away with his maiden WSOP bracelet and became the third champion for his country this season.

Plenty of notable names including former bracelet winners and online grinders were in the mix, and it took just about an hour for the bubble to burst. From there on out, the eliminations came at a quick and steady pace with big names such as Kahle Burns, Ryan Riess, Mike McDonald, Yuri Dzivielevski and Erik Seidel all heading to the rail.

Six-time WSOP bracelet winner Daniel Negreanu went on a deep run once again, and in fact cashed in all three WSOP events of the day. Negreanu eventually ran out of chips in 61st place after a roller coaster ride, when his open-ended straight flush draw missed against second pair and the clubs nut flush draw.

Four Asia Time Zone winners cashed in the event and added points towards the leaderboard for the Gold Dragon prize: Paul Teoh narrowly missed out on a fourth final table of the festival and finished in 12th place, while the other players were Roberto Romanello (153rd place), Aaron Wijaya (284th place) and Sung Joo Hyun (342nd place).

Three Natural8 players managed to reach the final table, but were down to one contender after the eliminations of Vladas Tamasauskas and Ignacio Chavero Moron in 8th and 9th place respectively. Luis Felipe “Xapilskinha” Assuncao Garla, however, went all the way and remained the chip leader throughout the final stages, eventually setting up the duel with Greek online poker coach Alexandros Theologis. 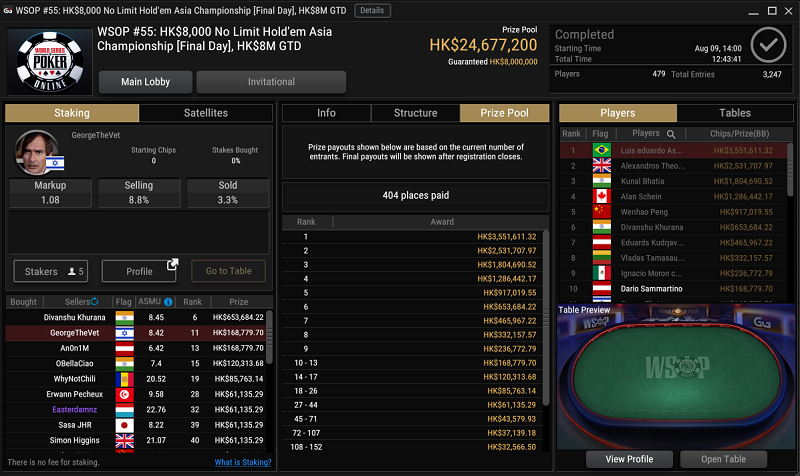 With the Winner’s Circle promotion, Natural8 players who win a gold bracelet this WSOP season will also walk away with sponsorships worth between $7,500 and $15,000. They will also be inducted into Team Bling, the team of ambassadors created especially for WSOP Online 2020 winners. The Natural8 player who takes home the Main Event bracelet will become captain of Team Bling and win a $100,000 sponsorship.

A High Roller edition of the popular weekly GGMasters was added to the WSOP schedule in the form of Event #56: $1,500 GGMasters WSOP Edition [High Roller]. Featuring a buy-in of $1,500, the event drew a total of 2,153 entries to easily surpass the guarantee and generate a prize pool of $3,068,025.

Many pros added the tournament to their busy Sunday schedule, and it came as no surprise to see familiar faces such as Conor Beresford, Darren Elias, Kevin Martin, Samuel Vousden, Alex Foxen, Davidi Kitai and Timur Margolin amongst those to cash. Kristen Bicknell (83rd place) reached the top 100, along with Bertrand “ElkY” Grospellier (40th place) and Daniel Negreanu (33rd place).

Among the casualties on the final two tables were Brandon Adams, Niall Farrell and Jonathan Therme, and it was Germany’s Paul Theobald who bowed out right before the nine-handed final table was set.

Yonathan Basin and Clement Tripodi only lasted a few hands, followed by a trio of Lithuanian players: Lukas Parednis, Dominykas Mikolaitis and Natural8 player Evaldas “Man14c” Aniulis, the latter who took home a juicy payday of $122,102 for his efforts. Michael “MrFabulous” Nugent, who had also been on the final table of Event #48 MILLIONAIRE MAKER, cashed for $169,821 in fourth place.

Sebastian Grax departed next for $236,188, despite starting three-handed action with half of the chips in play. The duel for the gold bracelet was then set up between EPT Sochi champion Arsenii “kastaban” Karmatckii and Seth “AbeFroman” Fischer. Karmatckii was not able to overcome a large chip deficit and had to settle for $328,491 while Fischer claimed his maiden bracelet, the top prize of $444,869 and a $12,000 WSOPE package. 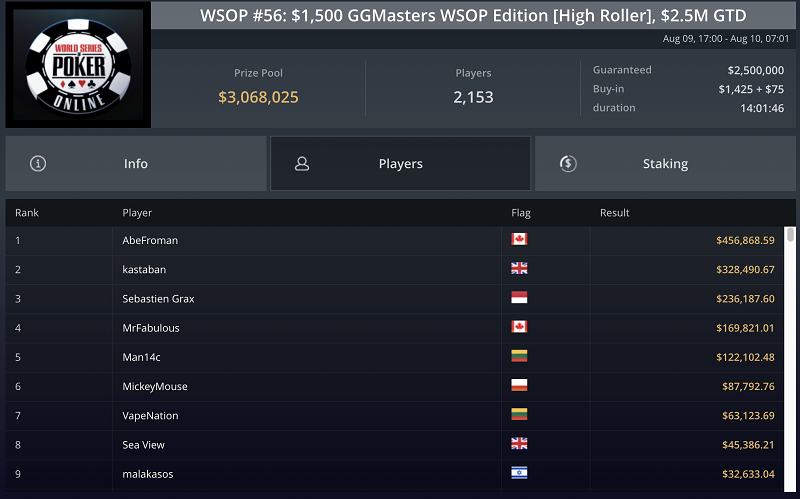 One of the most popular tournaments on the weekly GGNetwork schedule is the $150 GGMasters, which comes with a guaranteed prize pool of $1 million. This event is always held as a Freezeout, with players only having one shot at glory. As part of the WSOP Online 2020 schedule, this latest edition came in the form of Event #57: $150 GGMasters WSOP Edition (Freezeout). There was a total field of 9,835 entries and more than 1,200 players took home a portion of the $1,357,230 prize pool.

From start to finish, it took approximately fourteen-and-a-half hours to determine the latest WSOP champion and it was Russia’s Anatoly “Pohitrusha” Suvarov who ended up with all the chips and a payday of $183,526, more than 1,200 times the buy-in. Most of Suvarov’s live cashes so far come from Merit Poker festivals in Cyprus, and with this win alone he has earned more than the total of his live cashes put together.

Moving on, some of the big names that cashed were Daniel Negreanu, Ana Marquez, Joseph Cheong, Noah Schwartz, Max Pescatori, Galen Hall, Jason Wheeler, Thomas Boivin, Stefan Huber, and Chris Dombrowski – all of whom fell outside of the top 200 spots.

Two Natural8 players made the final cut and had a shot at becoming the 7th member of Team Bling. However, William “OveyGG” Overmire (9th place for $10,195.37) and Andre “grohnaldo” Grohnert (8th place for $14,632.29) ended up being the first two casualties. This was followed by three quick eliminations, bringing the field down to the final three before Suvarov rivered a flush in a flip with ace-queen suited against the pocket nines of Tom “Matrix1973” Hoseth.

Heads-up lasted for around an hour and David “Duvidl18” Edelstein held a near 4-1 lead at some point, but Suvarov struck back and eventually sealed the victory in yet another flip with pocket tens versus king-queen to engrave his name in the history books of poker. 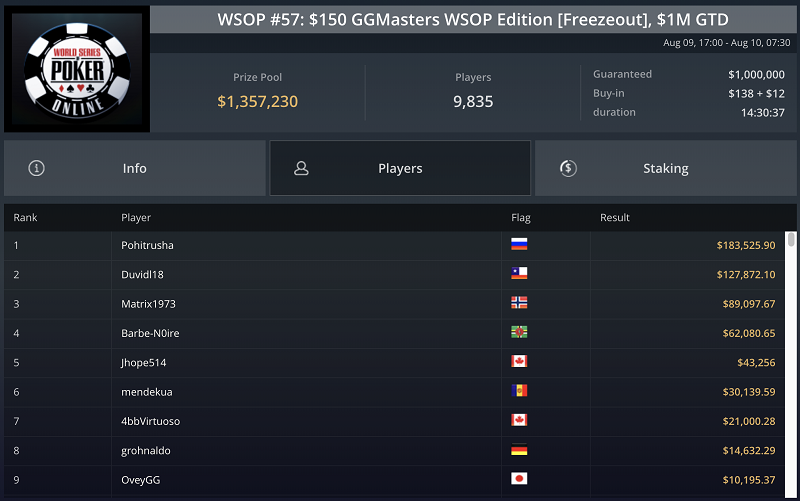 After six of the ten tournaments set in the Asia Time Zone have played out, it is Team Bling member and champion of Event #58 Assuncao Garla who has taken over the top spot on the leaderboard, ahead of Roberto Romanello. Other event champions like Aaron “fishnchip” Wijaya, Sung Joo “ArtePokerTV” Hyun and Paul Teoh reside in the top six overall for the Gold Dragon prize. 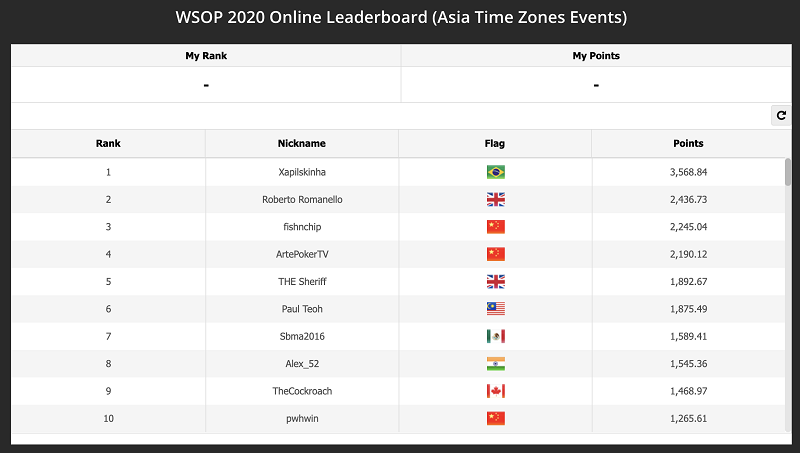 In the overall leaderboard for the entire festival on the GGNetwork, it is Team Bling member Daniel Dvoress who has claimed the top spot, about 120 points ahead of two-time champion Alek “astazz” Stasiak. Five Canadian flags and three Brazilian ones can be found in the top ten, while Malaysia’s Paul Teoh is close behind in 11th place. 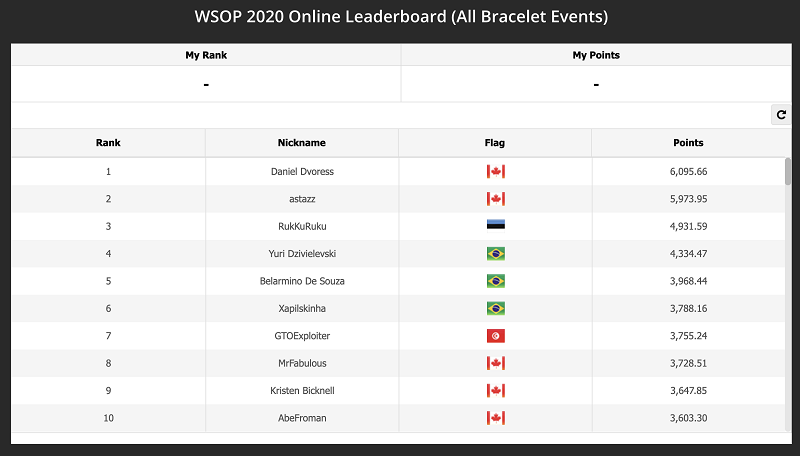 Also on Saturday August 15th, the final four in Event #54: $10,000 Heads-Up Championship will play down to a winner. Two Natural8 players: Chi Zhang and Michael Addamo, will face each other for their spot in the final, while Canadian Alyssa MacDonald will play against David Peters.

The upcoming Super Sunday will feature a total of three WSOP Online Bracelet Events once more.