The ambitious and biggest guarantee to date of $25 million for the WSOP 2020 Online Bracelet Events on the GGNetwork promised big things as that was the biggest foreseen prize pool for any online poker tournament. With 23 scheduled starting days for the $5,000 flagship event, poker enthusiasts from all over the world were allowed to enter a maximum of three times to take a shot at glory.

Those who attempted twice essentially paid the same amount as they would have done this summer in Las Vegas if poker’s most well-known tournament had taken place as planned. Several others even fired three shells without advancing to Day 2, most notably Daniel Negreanu who streamed his attempts on various social media platforms.

Mid-way through the qualification period, the tournament was behind the track to meet the guarantee but a late surge on the final four starting days ensured that it was not only reached but surpassed by more than 10%. The last turbo heat, Day 1W, attracted the biggest single starting field of 858 entries and boosted the prize pool by more than $4 million. 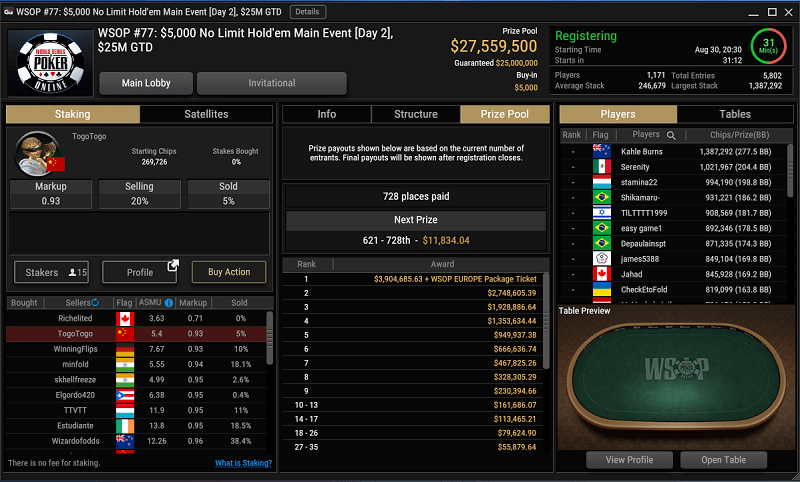 The biggest individual prize in the history of online poker will be awarded this Saturday, September 5th,2020, when the final 38 players return to their seats to crown a champion. A top prize of $3,904,686 awaits the eventual winner and the tournament will also pay out more than $1 million to the top four finishers, which is a joint-record in the world of online poker.

Here are some key facts at a glance

The total number of 3,470 unique players in the event made for approximately 59.8% of the total field size and thanks to the various step satellites, it was possible to enter the flagship tournament of the festival for a fraction of the cost.

There were certainly some ups and downs throughout all the 23 starting days, especially throughout the weekdays. The numbers were well below the average of ~252 entries that ultimately emerged. However, the participation picked up on Fridays and the weekend to ultimately surpass the guarantee. Some of the key numbers can be found below, which also includes how many players have made it through one of the starting days more than once.

Throughout the entire festival, the network has given away millions in satellite tickets which could then be used to try and turn into an entry for one of the 54 WSOP Online bracelet events. The main focus was certainly on qualifying as many players as possible for the Main Event and the number of seats earned can be found below.

The event will draw to a conclusion in a few days and the 38 survivors have already locked up $39,214.41 for their efforts. The next pay jump takes place with 36 remaining and comes with a payday of $55,879.64. Among the contenders still with chips at their disposal, six of them sold a percentage through the innovative staking platform within the poker client. 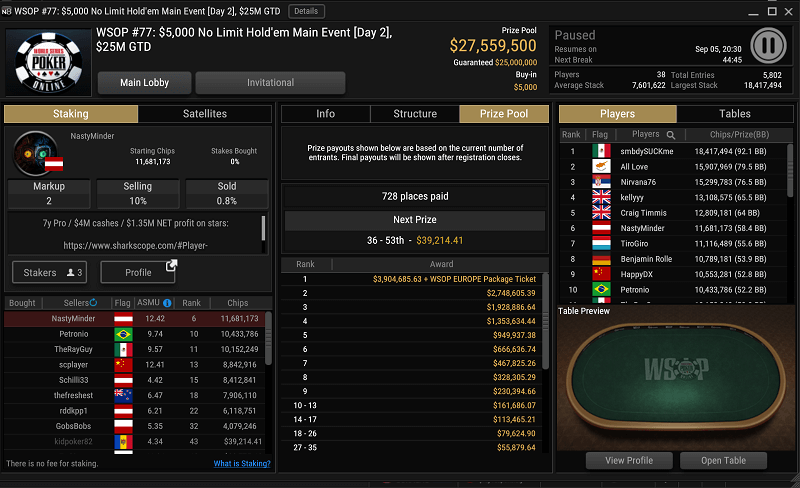 And another five poker enthusiasts can look forward to a share of the prize pool without being involved in the tournament as Natural8 has given away 1% of the action of Team Hot ambassador Phachara Wongwichit. The first on Thailand’s all-time money list for live poker tournaments sits in 26th place heading into the final day with just shy of 26 big blinds when the action resumes.