Three bracelet events in the 2020 World Series of Poker have played down to a champion, with Kristen Bicknell emerging as a repeat winner and notching her third gold bracelet.

The most expensive and first Championship event of the festival so far drew a total of 130 entries for a prize pool of $1,261,000. The top 17 spots were paid more than double their investment.

Natural8 ambassadors Thai Ha and Danny Tang battled at the tables, with Short Deck Specialist Thai Ha no doubt aiming for better than his two runner-up finishes in WSOP SD tournaments thus far. Luck was not on his side as he unfortunately bowed out before the money.

Tang fared better; locking up another WSOP cash in 12th place and beating other notables such as Sergey Lebedev, Jason Koon and Yuri Dzivielevski who hit the rail prior. George Wolff was the next to leave, and at the final table, Canada’s Ami Barer became the first casualty.

Three Natural8 players remained in contention, but all missed out on the podium and Natural8 sponsorships as Bjorn Li (7th place), Chi Zhang (6th place) and Nobuaki Sasaki (4th place) were gone by the time the tournament was three-handed. UK-based Spanish poker pro Sergi Reixach earned the bronze medal, effectively setting up the duel between Mikita Badziakouski and Lev Gottlieb.

Well-known from the High Roller circuit and Triton events, Badziakouski was the odds-on favorite to earn his first WSOP bracelet, having accumulated nearly $28.5 million in live cashes and several million on the virtual felt. However, a grueling heads-up duel went in favor of Gottlieb who made his first WSOP cash count in Event #43: $10,000 Short Deck Championship. 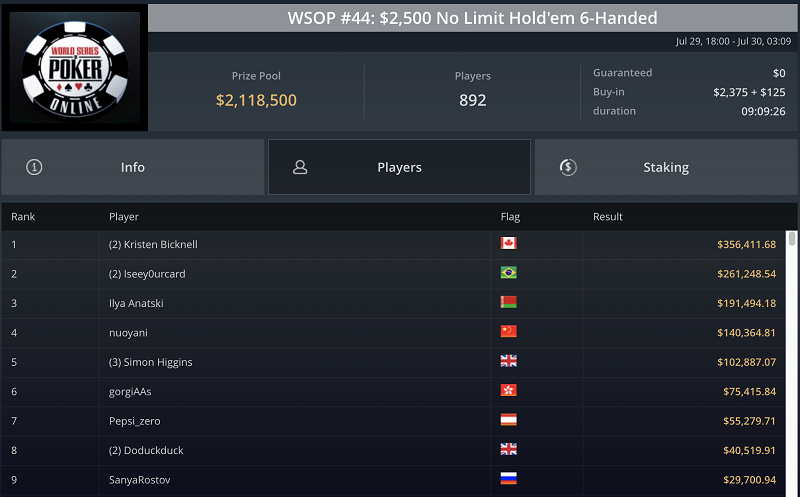 On the money bubble was Natural8’s most recent ambassador Pete Chen, who lost a classic race with ace-king against pocket queens and came up one spot shy of the money. Well-known names such as Julien Martini, Ben Farrell, Matthias Eibinger, Brandon Adams, Blake Bohn and Natural8’s “Team Hot” member Danny Tang all cashed but were gone by the time the final two tables were set. David Jackson and Christopher Kruk were responsible for some of the late eliminations but also wound up on the rail before the nine-handed final table was set.

Things looked dire for Bicknell at first as she had the shortest stack, but she and the others at the table were set for a rollercoaster ride.

Ultimately, Bicknell faced Brazil’s Belarmino De Souza in heads-up. De Souza was fresh off a 3rd place finish in Event #35: $5,000 Pot Limit Omaha Championship, and had notched up his sixth cash of the series. Jacks for an overpair was the pivotal hand for Bicknell when De Souza jammed a busted straight and flush draw. From then on, she cruised to victory and turned trip fives against kings up to seal the event in her favor while De Souza settled for the consolation prize of $261,248.54. 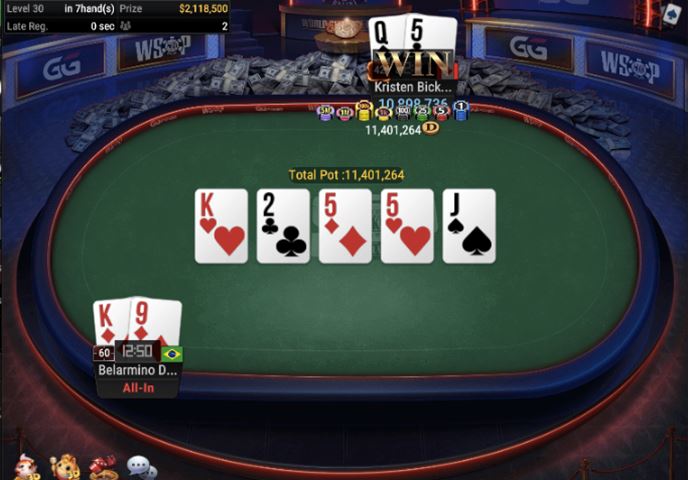 It was Bicknell’s second-biggest career score at $356,411.68, and she now joins the likes of Barbara Enright, Nani Dollison and Vanessa Selbst for the title of most bracelets won by a woman. She is also the fifth Canadian to win at least three bracelets, a list which is currently topped by Daniel Negreanu with six victories.

One of the larger fields of the festival so far emerged in Event #45 $840 Bounty No Limit Hold’em, thanks to 2,382 total entries which created a prize pool of $1,905,600. Half of the buy-in went towards the cash prize pool, while the progressive knockout for the remaining $400 turned into a huge factor especially in the late stages of the event.

It took more than 11 hours until one player had all the chips, and it was UK’s Patrick “Muddington” Kennedy who scored his first WSOP bracelet and denying Josh Pollock a third victory. A quick look at the bounty prizes on the final table revealed the biggest slice by far for the eventual champion, as Kennedy earned $104,680.51 for a total top prize of $245,448.39 whereas runner-up Pollock only held $11,964.06 in bounty prizes and a total prize worth $113,176.09. 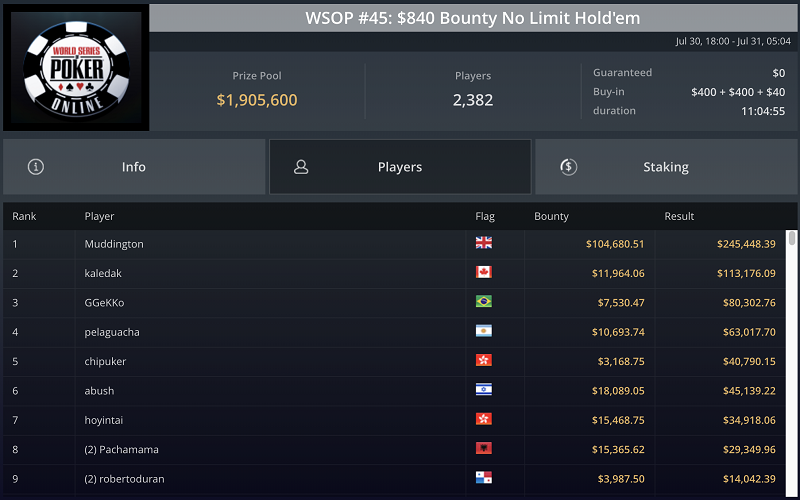 The next WSOP 2020 Online bracelet will be awarded in Event #46 $500 Deepstack No Limit Hold’em on August 1st, the third tournament geared towards the Asia Player of the Series leaderboard. Both the COLOSSUS and PLOSSUS will also play down to a champion on the same day, with the final tables streamed until their conclusion.

Additionally, survivors of the flights in the highly anticipated Event #48 $1,500 Millionaire Maker are slated to compete for the guaranteed top prize of $1 million. So far, 433 players out of 2,981 entries have punched their seats for the final day. The event offers a guaranteed prize pool of $5 million with plenty of starting days remaining. 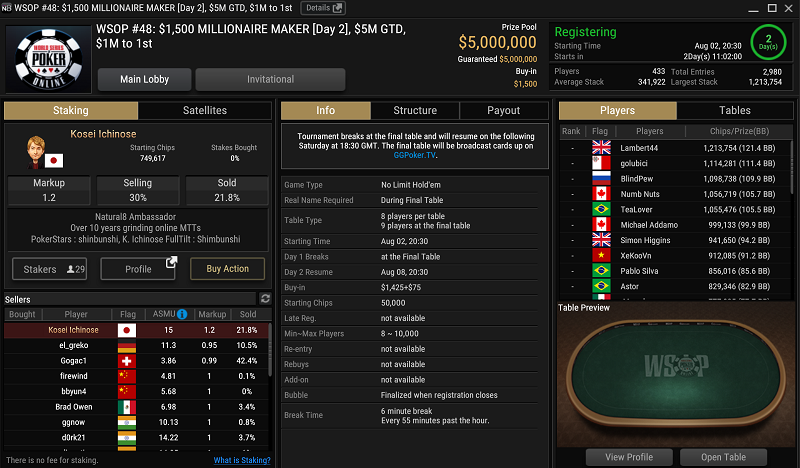