It was a busy weekend for online poker and the GG Network was bursting with action as four winners were crowned in the inaugural WSOP Super Circuit Series 2020 on Natural8. And while all previous events featured six and seven digit prize pools, Event #8 $25,000 High Roller Championship went one step further featuring an eight digit prize pool with more than $1 million in cash prizes going to each of the top three finishers.

The spotlight was certainly on the biggest names in poker as they battled it out for the High Roller Championship title and the event drew a massive field of 505 entries to surpass the guarantee and create a prize pool of $12,372,500.

The top 72 spots were paid and notables such as Kristen “Krissby24” Bicknell, “Olekonjole”, Fedor Holz and Bertrand “ElkY” Grospellier all busted shy of the money. The same also happened to the Natural8 ambassadors Danny Tang, Michael Soyza and Thai Ha, with the latter bowing out two spots away from the $57,546.97 min-cash.

Ultimately it would take nearly 15 hours to crown a champion and eight different nationalities were represented at the final table. Players from Canada took home nearly $2 million in cashes as “BlackPhilllip” finished in 4th for $865,749.60, while Natural8 player “HotPot44” came in third for $1,181,109.78. Another Natural8 player to run deep was “M0therLover” from Thailand who finished in 5th place for $634,592. 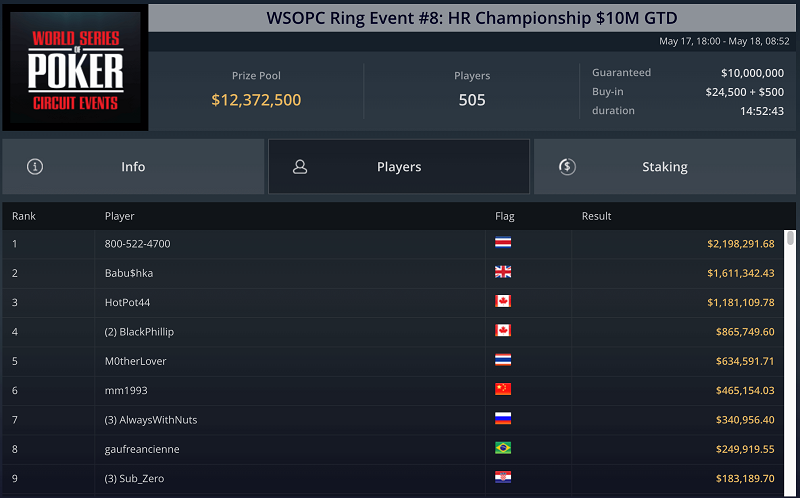 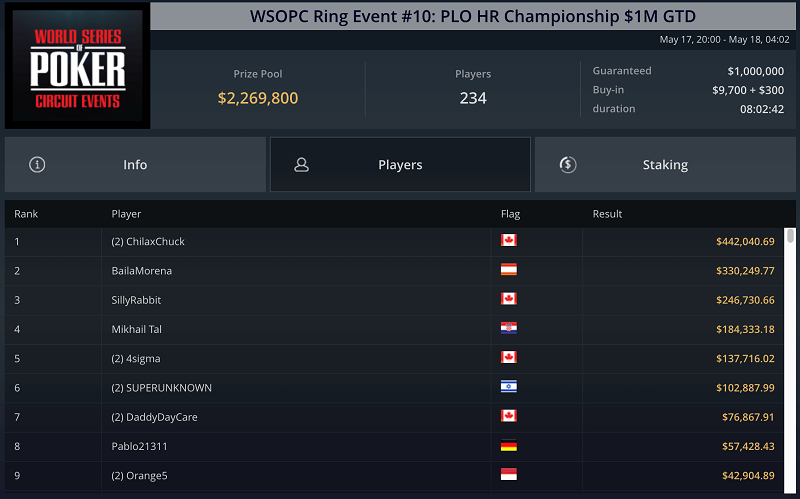 It took just over eight hours to crown a champion. On the six-handed final table, three players from Canada dominated the PLO action and “ChilaxChuck” knocked out all but one opponent on his road to victory. Natural8 player “4sigma” from Canada earned $137,716 for his 5th place and Felipe Ramos ended his run in 24th place to cash for $27,858.39.

In heads-up it was a classic Omaha setup that opened the final hand. “BailaMorena” and “ChilaxChuck” goes all in after seeing a 3♦ 7♠ 5♦ flop with “BailaMorena” hitting a straight. Both players had a flush draw which materialised on the river with a 7♦ and “ChilaxChuck”, who held the superior diamond, sealed his victory for a payday of $442,040.69.

Two other events awarded the elusive WSOP Circuit ring and gave players from all over the world the opportunity to battle for the title and potentially life-changing score at a bargain. 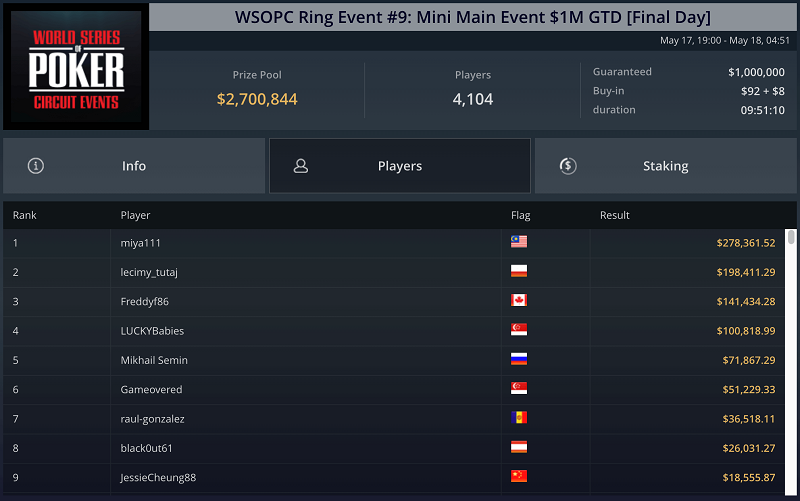 Russian mixed game specialist and poker commentator, Mikhail Semin, also reached the final table and had to settle for 5th place, which came with a prize of $71,867.29 for the mere investment $100. Poker superstar Fedor Holz was among those to cash in 540th place for $683.31 and Rafael “RafaelmoraesGM” Moraes took home the same prize as he finished a few spots behind Holz.

The fourth and final event of the Super Sunday was the one-day Event #7 $200 Monster Stack which nearly doubled the guarantee and created a prize pool of $949,624. A huge field of 5,161 entries emerged and it took close to 15 hours to whittle it down to the eventual winner, which happens to be “ShopChop96” who represents Mexico.

“ShopChop96” took home $135,065.41 and the WSOP Circuit ring and converted a big stack throughout the middle stages of the tournament to victory after defeating “Jayb0y_11” from the United Kingdom in heads-up. Two Natural8 players reached the final table but “Yummers19” fell in sixth for $20,767.61 and Germany’s “LMFAO” earned $30,200.60 in fifth.

Seven Canadians were in the top 13 in the Rest of the World (ROW) leaderboard on Super Sunday May 17th and WSOP Circuit ring winner “TheMadQueen” earned additional cash. The leaderboard was topped by “HotPot44” followed by “4sigma”. In the Latin America (LATAM) leaderboard the top 9 earned cash and Costa Rica’s “GG_Player1” took home $688 whereas Natural8 Team Hot member Michael Soyza finished second to Thailand’s “M0therLover” in the Asia leaderboard.

The next WSOP Circuit Ring to be given away will be on 19th May at Event #11 Deepstack Bounty Hunters. With a $210 buy-in and $500,000 GTD, this event is sure to draw a crowd of knockout enthusiasts. Don’t have the bankroll to do a direct buy-in? Natural8 will be holding “WSOP Hero Tournaments” throughout the next few days. Players can opt to buy-in for a mere $1 to win seats to the satellite. Stay tuned for more exciting updates from the WSOP Super Circuit Online Series 2020.