This past weekend, a total of five tournaments in the World Series of Poker 2020 Online tournaments played down to a champion. Included in that was the outcome of the highly anticipated Heads Up Championship and the Mini Main Event, which drew a big field and paid out one of the biggest prizes of the festival so far.

After a break of six days, the final four returned to their seats in Event #54: $10,000 Heads Up Championship. Another two victories were required to earn the elusive WSOP gold bracelet and the top prize of $360,480 that came along with it.

In the first semi-final the two remaining Natural8 players clashed, and it was once again Michael Addamo who was the first to book his seat for the next round. Chi Zhang’s flopped top pair was no good as Addamo held trips when they got it in to send the Aussie through. The second semi-final saw David Peters battle with Alyssa MacDonald, and his flopped middle pair and turned flush draw got there to beat the top set of MacDonald.

The final showdown lasted some two hours and Peters escaped from elimination once when he doubled with a turned straight flush against the nut flush of Addamo. Later on in shallow waters with increasing blinds, Addamo could not recover from a large chip deficit and missed out on his third bracelet whereas Peters doubled his tally when ace-king nailed a full house against jack-trey suited.

The seventh of ten events which count towards the Asia Time Zone leaderboard kicked off last Saturday, and it was a third victory for the UK when a big field of 3,491 entries whittled down to an eventual champion.

Alexander “MightyWarior” Stacey claimed his maiden WSOP bracelet and a top prize of $127,590.72 along with a WSOPE package after defeating Craig “Tonkaiktomni” Lecompte in heads-up. UK based French poker pro Arnaud Enselme finished 4th for $50,586 while Steve O’Dwyer had to settle for 7th place and $18,323, despite starting the nine-handed final table as the chip leader. One Natural8 player, Wai Ching “KEN-C” Cheang, reached the final nine and finished in 8th place for $13,061. 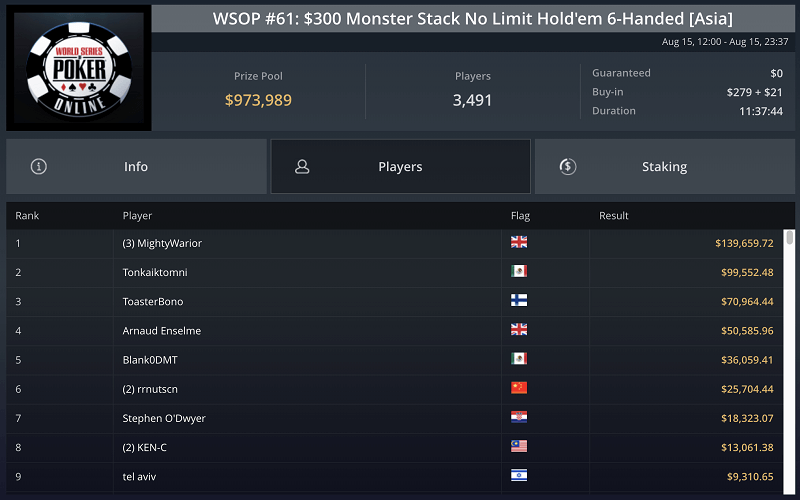 Natural8 player and Team Bling member Luis “Xapilskinha” Assuncao Garla maintained his lead on the Asia Time Zone leaderboard, ahead of Welshman Roberto Romanello while Stacey jumped into fifth place with this win. Another three events remain for players to earn vital points to top the leaderboard and win the unique Gold Dragon trophy.

The seventh unique player to win a Pot Limit Omaha (PLO) bracelet this festival is Florida native Bradley “DrStrange7” Ruben. Heading into the tournament with a track record of eight cashes in the prior series, Ruben dominated the late stages of the final table. He sent the final four opponents to the rail en-route to claiming the top prize of $220,159.60 and also received a package for the World Series of Poker Europe.

The second Natural8 player was in prime position to join Team Bling when the field combined to the final table, as Patrick “NeatDad1971” Serda was the chip leader. However, nothing went his way and the Canadian eventually hit the rail in 7th place for $33,910.05. Another big name busted after that in Finnish high stakes player Sami “YrttiDekaani” Kelopuro, who took home $46,727.14 in 6th place.

Bradley “DrStrange7” Ruben started the final table as one of the short stacks and was still near the bottom of the leaderboard with six remaining, but managed to earn a double and another big pot to take over the lead. Ruben then proceeded to knock out each of his four remaining opponents to emerge victorious. Among them was German mixed game specialist Jens “Tankanza” Lakemeier who fell in 3rd place for $122,264.05. The heads-up against Dorel “DorelEl” Eldabach lasted only a few hands, and the flushdraw of Ruben got there to beat an overpair. 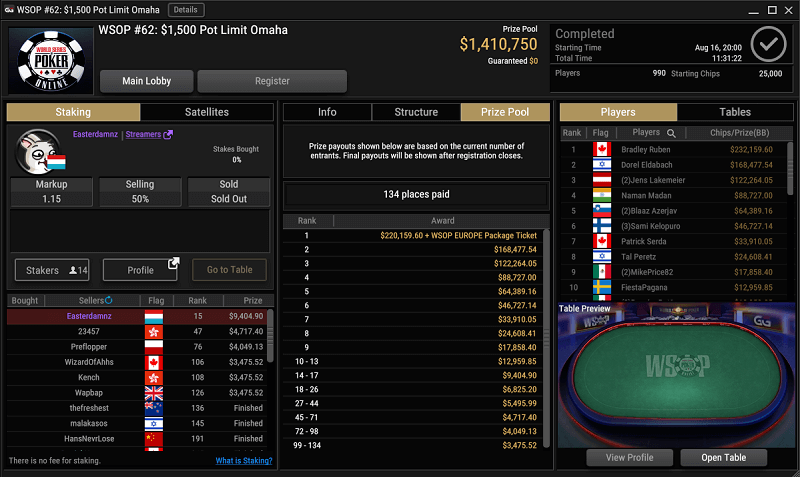 Three countries have won their first-ever WSOP bracelet in the festival so far, and that number has now increased to include Croatia with the victory of Ivan “zufo16” Zufic in Event #63: $500 Mini Main Event. The event with 15 starting days attracted a huge field of 15,205 entries, for a prize pool of $7,222,375.

Only 2,055 players returned to their seats and the top 1,600 spots were paid. While the race to the money bubble only lasted 90 minutes, the improved tournament structure gave all contenders more room to maneuver and it would eventually take a marathon shift of 16 hours to determine a champion.

Two Natural8 players were in the mix when the final nine players combined to one table, but high stakes cash game player Fedor Kruse became the first casualty and departed in 9th place for $41,566.21. That left the second Natural8 player Suraj “M26GreenWood” Mishra and Zufic to battle for the massive top prize of $855,460.48, the gold bracelet and a package for the WSOPE.

Zufic held a slight lead when the heads-up started and then pulled into an overwhelming one within a couple of hands. Ultimately, Mishra took a flip with deuces against ace-nine and an ace on the flop ended his run in 2nd place for $586,157.12. 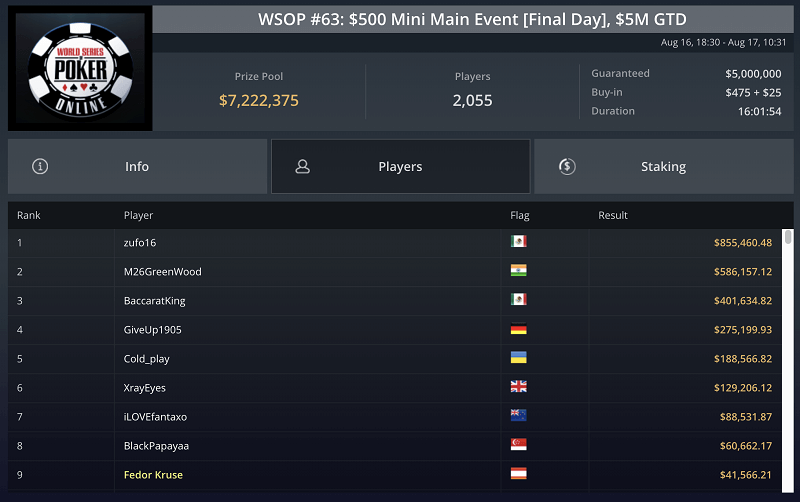 The last WSOP bracelet event to kick off on Sunday was also the first to finish as Event #64 $840 Turbo Bounty No Limit Hold’em featured blinds of just eight minutes. It took six hours and 13 minutes to whittle down a field of 2,207 to a winner, as Kartik Ved claimed his first WSOP bracelet.

Daniel Negreanu recorded his 27th cash of the series, which includes the 31 events on WSOP.com and all tournaments on GGNetwork so far. The Canadian ultimately fell in 95th place, but fellow GGPoker ambassador Felipe Ramos made it all the way to the final table after five hours of play.

The two Brazilians Ricardo “Sambalele” Da Silva and Ramos fell in 8th and 7th place respectively, while UK’s Jon “JPC123” Clark and Romania’s Dan “NeedLuck” Borlan became the next casualties. Kartik “Mandovi” Ved took over the lead by then after he had doubled through Borlan, and Konstantin “makRUSgreaga” Maslak knocked out American poker pro Tim “TMay420” West.

Spanish pro Javier “Marcodamme” Fernandez was ahead with ace-deuce versus king-nine when the chips went in, but Ved turned trips kings to enter heads-up with a 6-a lead over Maslak. Despite that major disadvantage, Maslak took over the lead but Ved struck back and turned the tid once more. Ultimately, Ved’s jack-eight suited connected with the board to beat the king-six of Maslak, earning him the bracelet and $234,433.37 in cash and progressive bounty prizes. ![Final Result Event #64 (1)](//images.ctfassets.net/lbdswej3w7v2/1WDbUPIwqfStOfCFWEvwR/ea8c82856d1bd3951753c6bd4c2de1c6/Final_Result_Event641.png)

Previous Article
Halftime Stats at the WSOP 2020 Online
Next Article
Ukraine, Ireland and Austria Bags A WSOP Bracelet each