On Dec 13, the second World Series of Poker Winter Online Circuit kicked off on the GGPoker Network (GGPN), with the first two champions crowned two days later. Meanwhile, one event is one step closer to awarding a WSOP Circuit ring as Event #1 BIG $50 has reached the final table.

Featured in the semi-final were Vitor “Alemao” Martins, Ryosuke “KBD05” Kubodera, Joao “MariaJoao” Monteiro and Matias “PrisonMike69” Arosuo. The final table was then set with the elimination of Croatia’s Matija “crunchy215” Dobric.

Aleksey “ImLuckPads” Savenkov scored the final elimination of Day 2 and soared to the top of the leaderboard with just shy of 80 big blinds. The nearest followers are China’s “QY707” and Russia’s “party_maker1”. The only other known finalist is Otto “D00MSWITCHER” Lemke, who sits in 4th place with 38 big blinds. 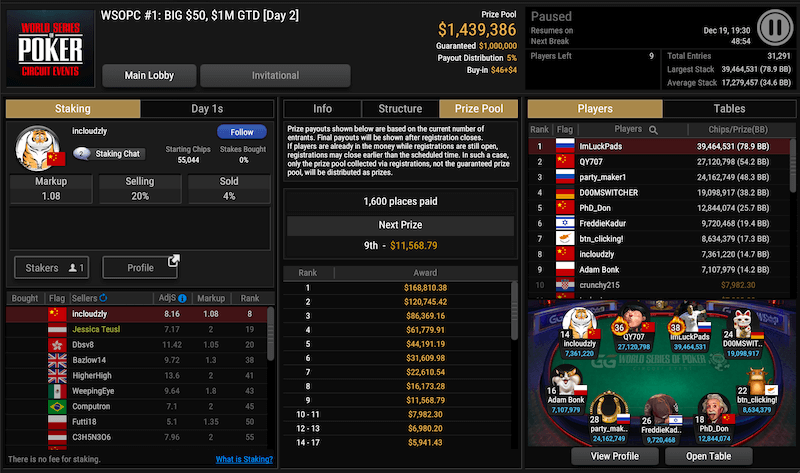 Day 1 of the weekly high stakes showdown kicked off on the first Super Sunday of the festival. The special edition of the $10,300 Super MILLION$ came with a $5 million guarantee, and was surpassed thanks to 314 entries.

The top sixty spots were paid a portion of the $5.11 million prize pool, and the flagship tournament attracted some of the biggest names in the world of both online and live poker.

Towards the end of Day 1, further notables such as Kevin Rabichow, Arsenii Karmatckii, Rui Ferreira and Luke Schwartz all hit the rail. Raise Your Edge founder and friend of Natural8 Benjamin Rolle came close to another major final table but fell in 11th place, followed by Marius Gierse to conclude Day 1.

The first three casualties on the final table, which was streamed with cards-up coverage and commentary on a delay in the usual Tuesday slot, were Jorma Nuutinen, “RogerScruton” and Samuel Vousden. WPT Online 2020 Main Event champion Phillip “tazmania888” Mighall then fell in 7th place, when his ace-jack suited failed to beat pocket jacks.

The lead switched back and forth, before Kotelnikov lost almost all of his chips with nines versus kings, settling for the runner-up spot ($526,880.70) shortly after. Melogno added another big score to his resume and walked away with $636,072.03 for their efforts. 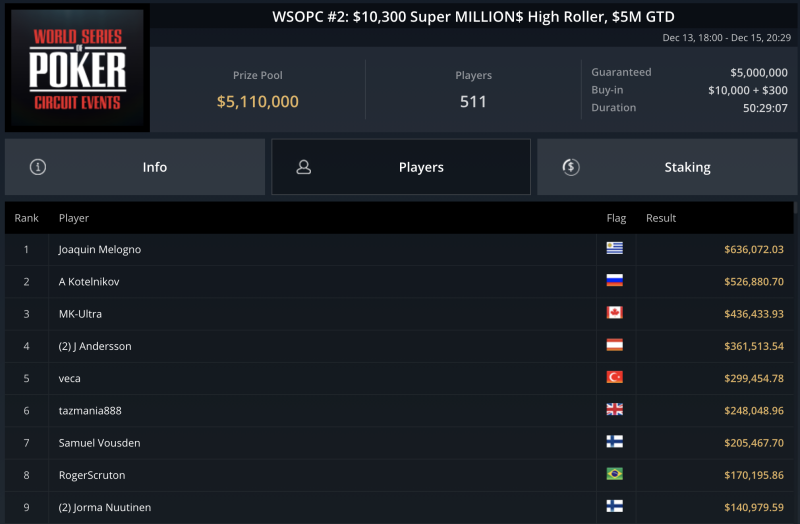 Sweden’s Christian Jeppsson reached the final four tables in Event #2 $10,300 Super MILLION$, but missed out on the final day on Tuesday. He was still involved in the poker action while Event #2 played down to a champion, and emerged as the champion in Event #3 $3,000 Deepstack NLHE Championship.

Jeppsson defeated Dutchman Daan “DaanOss” Mulders in a field of 504 entries, which had created a prize pool of $1,436,400. The top 80 finishers cashed, and the final three tables also featured Natural8 Team Hot ambassador and MTT specialist Bryan Paris. He finished ahead of other big names such as Shyngis Satubayev, Nikita “VSMPZD” Kuznetsov, Pavel Veksler, Ole Schemion and Joao Vieira. Paris then hit the rail in 13th place for $13,531.40.

Once heads-up was reached, it didn’t take long for Jeppsson and Mulders to cut a deal when both were nearly even in chips. They still battled for the WSOP Circuit ring, and it was eventually the former who prevailed with king-queen versus ace-seven after turning a queen. Mulders earned $213,400.31, with Jeppsson’s payday just slightly higher at $213,927.57. 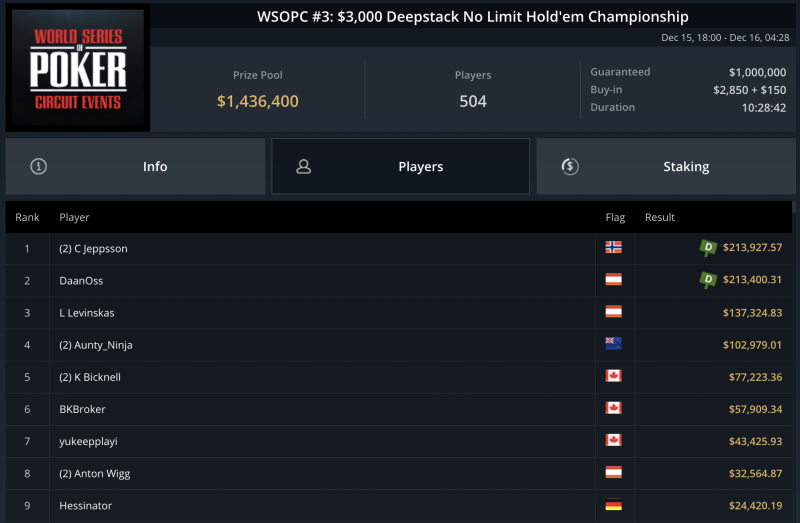 Which Events Take Place Next?

Besides the final table of Event #1 BIG $50, the upcoming weekend features another three WSOP Circuit Ring Events. On December 19th, Event #4 $800 Monster Stack NLHE will provide 50,000 in chips and a level duration of 12 minutes each with a guaranteed prize pool of $1 million.

On the second Super Sunday, Event #5 $600 Pot-Limit Omaha comes with a guarantee of $500,000. The six-handed tournament provides a starting stack of 25,000 (125 big blinds in the first level) and will play down to a winner with levels of 12 minutes each.

Several starting days remain for Event #6 $170 Mini Main Event, which has attracted nearly 10,000 entries so far. More than 1,300 players have secured their seat for Day 2 on December 20th, and the event will play down to a nine-handed final table. 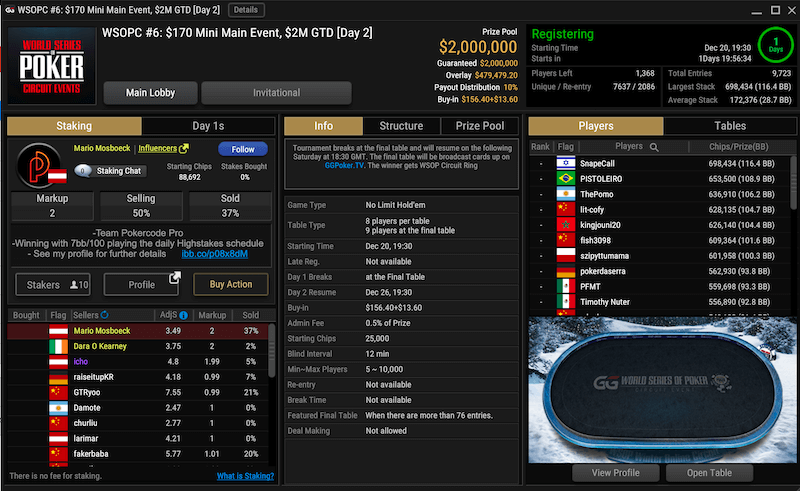