The Next Three WSOP Winter Online Circuit Champions Have Been Crowned

The second World Series of Poker Online Circuit on the GGPoker Network (GGPN) is in full swing, and five Ring Event champions have been crowned thus far. The final table of Event #6 $170 Mini Main Event has also been set.

Below is a summary of the overall numbers so far, along with a brief recap of the last three events.

The biggest payday was awarded to Uruguay’s Joaquin Melogno, which comes as no surprise since he took down Event #2 $10,300 Super MILLION$ for $636,072. All five winners so far hail from different countries and the next champion will be crowned on December 22.

A gigantic field in the first multi-flight event of the festival had whittled down the contenders to the final nine, who were then sent on a break for five days. The final table of Event #1 BIG $50 took place on December 19, and was a brief affair of just over two hours.

Russia’s Aleksey “ImLuckPads” Savenkov and China’s “QY707” were the two biggest stacks when the action resumed, and they faced off in heads-up for the top prize of $168,810. Prior to that “QY707” knocked out fellow countryman “PhD_Don” in 9th place, while Savenkov notched up the next elimination.

Otto “D00MSWITCHER” Lemke sent the third Chinese player on the final table, “incloudzly”, out in 7th place. The next two hopefuls “FreddieKadur” and “Adam Bonk” both ran out of chips against “QY707”. Savenkov knocked out fellow Russian player “party_maker1” and the action slowed down after.

Lemke took over the lead for a brief period but had to settle for 3rd place, when nines were no good against the jacks of Savenkov. He received $86,369 for his efforts.

It was all over soon after when Savenkov tabled jacks once more, as “QY707” came up short with eights to claim $120,745. Savenkov scored the biggest payday of his poker career for $168,810 and earned the first WSOPC ring. 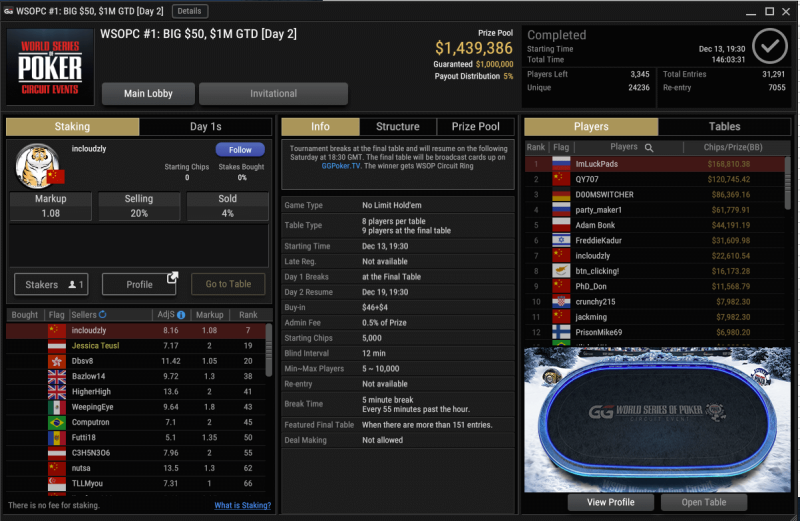 Saturday featured another WSOPC Ring Event and 1,395 entries emerged in Event #4 $800 Monster Stack No-Limit Hold’em. The field consisted of 934 unique players and 461 entries, creating a prize pool of $1,060,200 which was distributed among the top 233 finishers.

Argentina’s Martin Pineiro came up short of a cash, but received his buy-in back thanks to the Early Bird Bubble Protection feature - available to players who register prior to the start of tournaments. Another two players busted at the same time, and Pratik “shreeOHM” Patel became the bubble boy.

A mere three hours later, the final table was set as the eliminations kept coming at a frantic pace. Sihao “Mr_3rdBullet” Zhang, who showcased his aptly picked alias by firing as many entries in the tournament, was the chip leader with nine remaining after knocking out Guillaume Nolet.

The player from Luxembourg dominated the action with sheer aggression and knocked out four of the first six opponents including Seungmook “7high” Jung, “Promoking”, “Pur3WiT” and Wei Zhao. Down to the final three, Maicon “21_Pirlo” Gasperin doubled “Andrew Xu” and fell to Zhang in 3rd place ($78,993).

Only a few minutes later, “Andrew Xu” had to settle for the runner-up spot and received $105,339. Zhang’s victory came with a payday of $140,472 alongside his first WSOPC Ring. 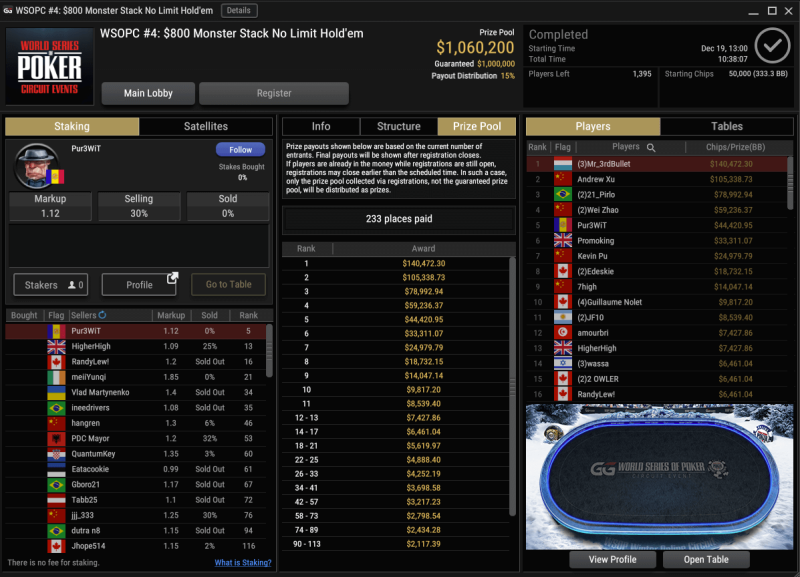 Goyal Wins First Ring for India During the Festival

On the second Super Sunday of the festival, action was buzzing on the GGPN. India’s Pulkit Goyal emerged as the champion in Event #5 $600 Pot-Limit Omaha for a career-best score of $82,052.

With 12-minute levels and 15 levels of late registration, 619 unique entries and an additional 422 re-entries boosted the prize pool to $593,360. The top 179 spots were paid at least $1,001 and George Wolff was the last player to leave empty-handed.

Fedor Holz made it all the way to 38th place and was followed by Ivan Zufic and Sebastian Sikorski. PLO specialist Gavin Cochrane missed the final three tables, and Goyal soared to a bigger stack with the eliminations of Craig “GoBlue” Varnell (15th place) and Andreas Christoforou (14th place).

Once the nine-handed final table was set, Goyal was in 2nd place and Russia’s “1bloodflood” occupied the top spot. A new chip leader emerged soon after as Loucas “Rage Monkey1” Kourtoumbellides assumed control. It took just half an hour to reduce the field to the final four from there on.

The flopped nut straight of Goyal sent “1bloodflood” out in 4th place, while Karl “Rossz” Schedlberger busted with kings full against the aces full of Kourtoumbellides. Deal discussions came to no agreement twice. Kourtoumbellides eventually fell short of the desired victory to collect $61,530. 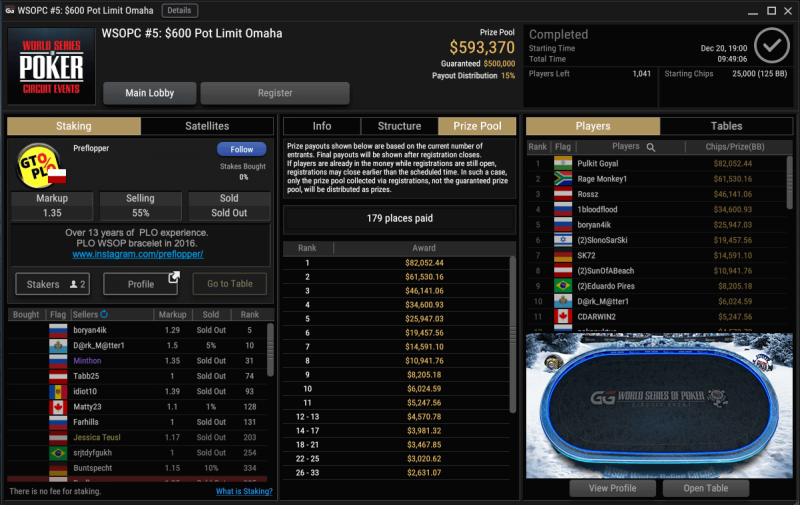 Only 2,703 players out of a field of 17,478 survived their starting days in Event #6 $170 Mini Main Event, battling for a share of the $2,733,559 prize pool. Only 1,800 of them succeeded and it took around eight hours to get down to the nine-handed final table. All remaining hopefuls are currently on break and will aim to earn the top prize of $277,277 when the action resumes on December 26.

Deep runs were recorded by notables such as Alex “AlexTheGreat” Machado, Diego “TheProjector” Ventura, Freek “Jeff Pesos” Scholten, and Marcio “Nodenuevo” Zacconi but all busted on the final two or three tables. Franco “pelaguacha” Spitale became the final table bubble boy when his ace-jack was no good against ace-queen. That hand propelled Ioannis Angelou-Konstas to the second biggest stack. 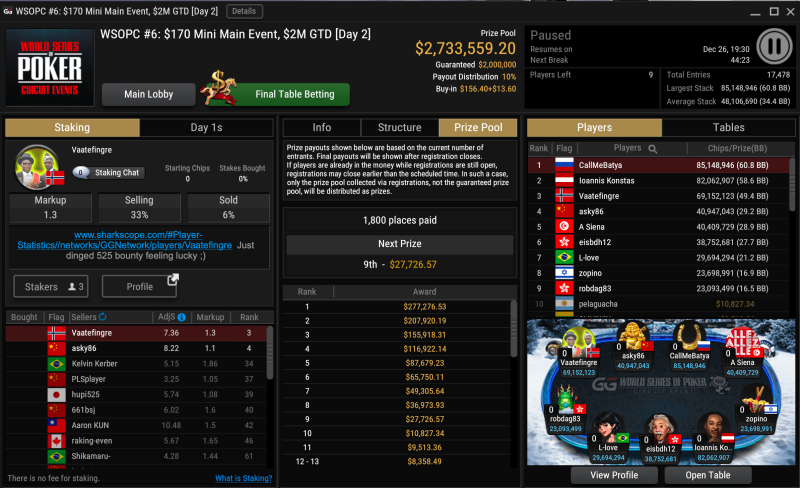