The 2021 World Series of Poker Super Circuit Online Series is on the home stretch and the penultimate weekend of the festival has wrapped up. Another four champions were crowned, each of them taking home the elusive WSOP Circuit ring. This time, no Natural8 player joined the winner’s circle but four contenders reached the final tables and two fell just shy of that.

Four-card aficionados entered the fray in Event #12: $800 Pot Limit Omaha Championship and the field consisted of 335 unique entries who purchased 334 re-entries. That created an overall field sze of 669 and the $250k guarantee was more than doubled to put $508,440 up for grabs.

The tournament was played in a six-max format to ensure action at all times and the top 98 finishers earned at least $1,413.22 for their efforts. Among those that cashed soon after the bubble burst were Eder “BlueMoon” Campana, Espen Myrmo, Connor Drinan, Ami Barer, Benjamin “dr100percent” Juhasz, Chris Moorman, and Joachim “jochee” Haraldstadt, the latter of which fired ten entries. 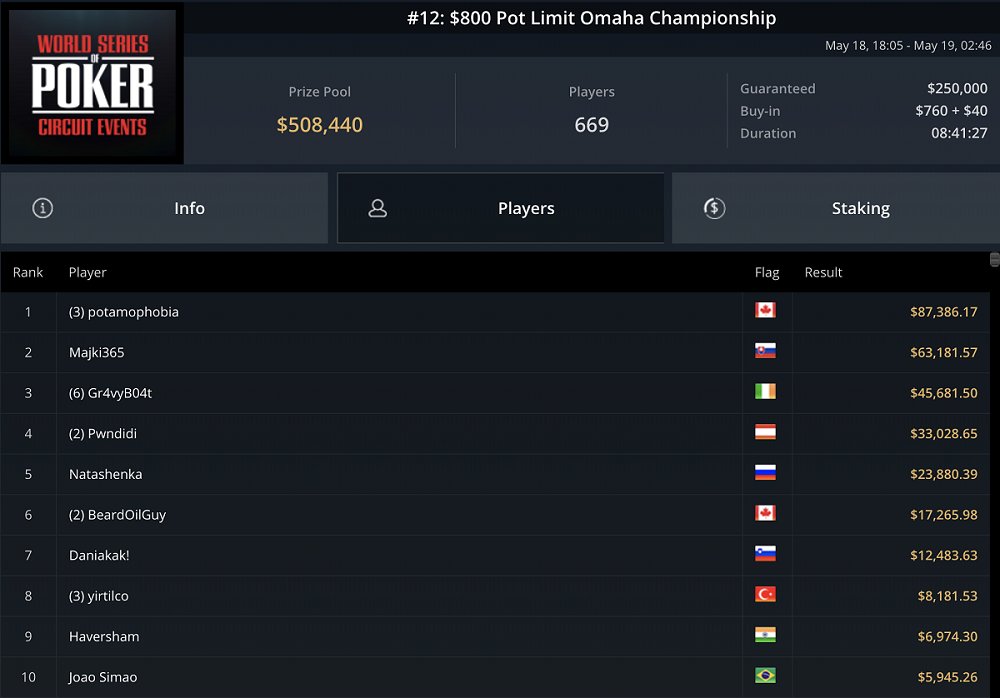 Another six-max tournament followed on May 22 and bounty hunters rejoiced at the chance to score a payday for each casualty. With a price tag of just $210, it was one of the bargain events of the festival and drew a large field of 3,156 entries. That resulted in a prize pool of $631,200 and it took nearly ten and a half hours to determine a champion.

At least $50 was awarded for each knockout and the top 356 finishers also earned a portion of the cash pool worth at least $356.25. Artur Martirosian and GGSquad member Kevin Martin hit the rail on the first payout step and the same also applied for featured players Dara O’Kearney, Jessica Teusl and “scrimitzu”.

Austrian streamer “HansiWurst” cashed for more than $4k and Natural8 Team Hot ambassador Pete Chen reached the final three tables. He succumbed in 22nd place for $2.114.21, which includes $844.53 in bounties. Another three Natural8 players ran deep and made it to the seven-handed final table.

Unfortunately, Malaysia’s “PenangCKT”, Taiwan’s “Meimei555” and “ChampakBhoomiya” from India were the first three casualties. The tournament ended without a deal as Austria’s “NuttedDreams” overcame “opener” from Israel to retain their large bounty and cash for $51,285.42 in total. 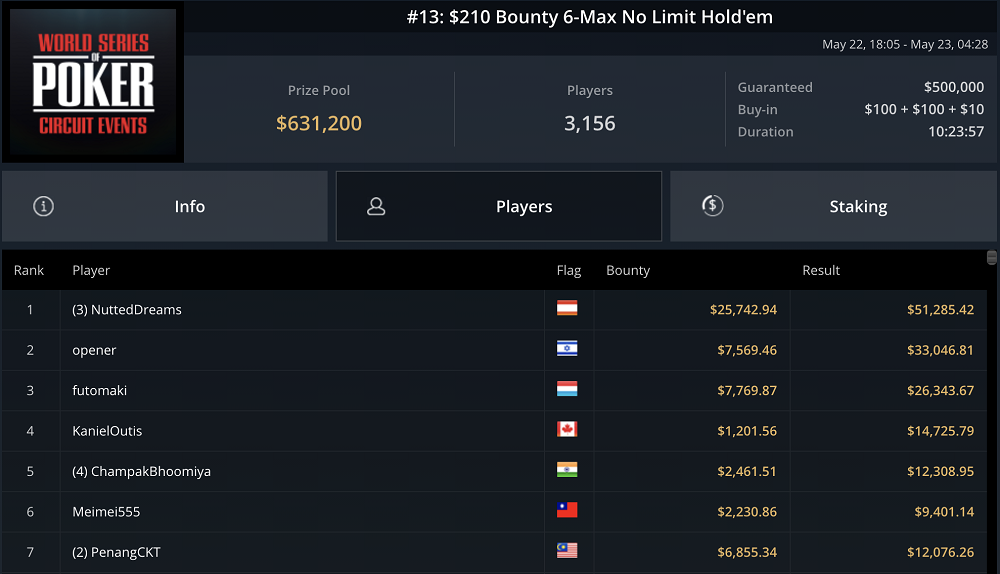 GGPoker ambassador Bertrand “ElkY” ran deep and hit the rail in 162nd place or $593.22, soon to be followed by Natural8 streamer Dan Almeida in 146th place for the same payday. Natural8 player “ChampakBhoomiya” fired five shells and turned those into 83rd place for $889.45, Joshua McCully finished in 58th place for $1,018.

Notables to fall in the late stages included Peter Turmezey, Shannon Shorr, and Ioannis Angelou-Konstas. No Natural8 player reached the final table this time and the only known finalist Daniil “AllinFanLOL” Maksimchuk fell in third place for $42.749.76. Ecuador’s “Lovejuoo” cashed for $57,007.69 but came up short of victory. Instead, it was Germany’s “Ficho” who accumulated all the chips, top prize of $76,029.52 and WSOPC ring.

During the last World Series of Poker Online Circuit, Anson “Tara@0z” Tsang earned his first WSOPC ring in the $400 PLOSSUS. Another Natural8 player almost repeated the victory as Brazil’s Belmiro Ribeiro beat all but one opponent to earn a six-figure score.

With several starting flights available, only 445 players out of 2,935 overall entries returned for the final day in this six-handed PLO tournament. The top 300 finishers earned at least $1,021.50 and that’s what Natural8 Team Hot member Kosei Ichinose had to settle for as one of the first casualties in the money. Daniel Dvoress busted soon after in 242nd place and received the same cash prize.

Ioannis Angelou-Konstas recorded yet another deep run and cashed for $27,671.43 thanks to his 6th place finish. After sending “Potsticker” to the rail in third place, Japan’s “RyutaroTY” held a large lead over the only Natural8 finalist Belmiro Ribeiro, who couldn’t overcome the chip deficit. Ribeiro cashed for $101,258.26 while “RyutaroTY” earned the WSOPC ring and top prize of $140,050.95. 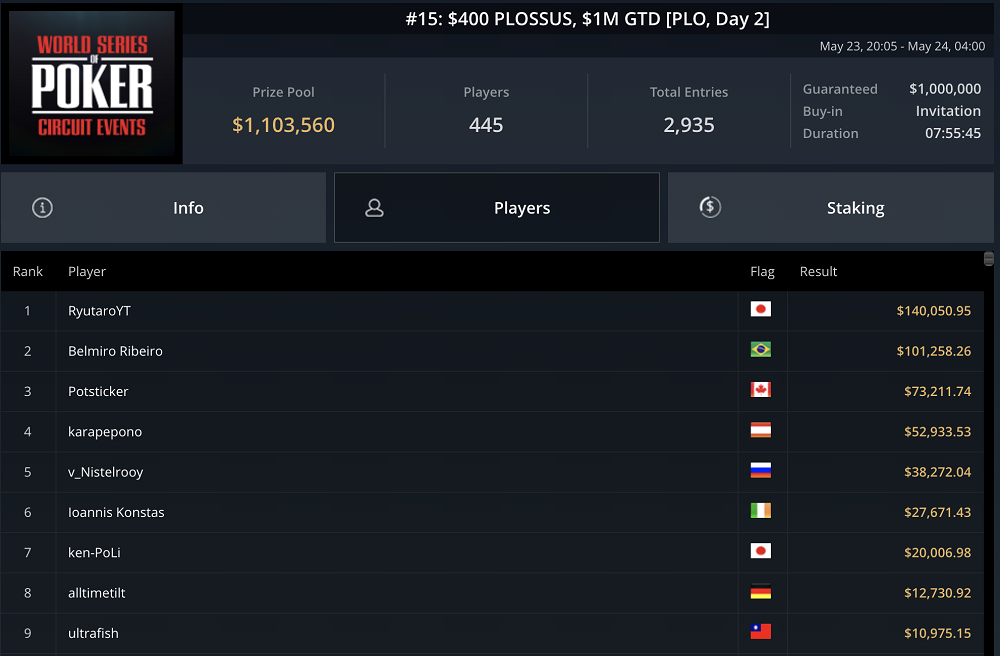 Another three of the elusive rings are up for grabs in the days to come including in the enormous $525 Main Event, which features a gigantic $5 million guarantee. Satellites and Day 1s will be running around the clock to give poker enthusiasts from all over the world the chance to compete.Day 2 takes place on Sunday, May 30, 2021, and the final table will be streamed on the GGPoker.tv Twitch channel.