The 2021 World Series of Poker Super Circuit Online Series has been a thorough success on the GGPoker Network and paid out almost $105 million in prize money throughout May 2021. Three elusive rings are still up for grabs while the last two tournaments to conclude featured yet another Natural8 champion to bring the overall tally to three.

Taiwan’s “davidchien88” has become the third Natural8 winner during the festival and has earned a $10,000 LiveX sponsorship courtesy of Asia’s leading online poker site. In Event #16: $840 Bounty Hunters Championship, he defeated a 1,477-entry strong field after defeating Jakub “Janusz1957PL” Michalak in heads-up.

The $181,600 prize pool was split into cash and bounty prizes with the top 206 spots earned a portion of the cash pool. Among the notables to bow out prior to that was GGPoker OmahaSquad member Sasha “PokerSasha” Liu. Natural8 ambassador Pete Chen, Denys Chufarin, Damian Salas, Dara O’Kearney, and Jessica Teusl, all made the cut but came up short of the top 100 spots.

“davidchien88” won a crucial flip to knock out Robert Haigh in seventh place before going on a riot to eliminate another four opponents. He entered heads-up against Michalak with a 2-1 lead but quickly pulled way ahead to eventually finish the job in a cooler. Michalak flopped two pair while “davidchien88” held broadway to clinch the title.

Two other Natural8 players joined the winner’s circle during the festival and earned a $10,000 LiveX sponsorship each. Canada’s David “Alw4ysinduc3” Vinayagamoorthy prevailed in Event #10: $100 HUNDRED STACK No Limit Hold’em and “Raggaz” took down Event #7: BIG 25. 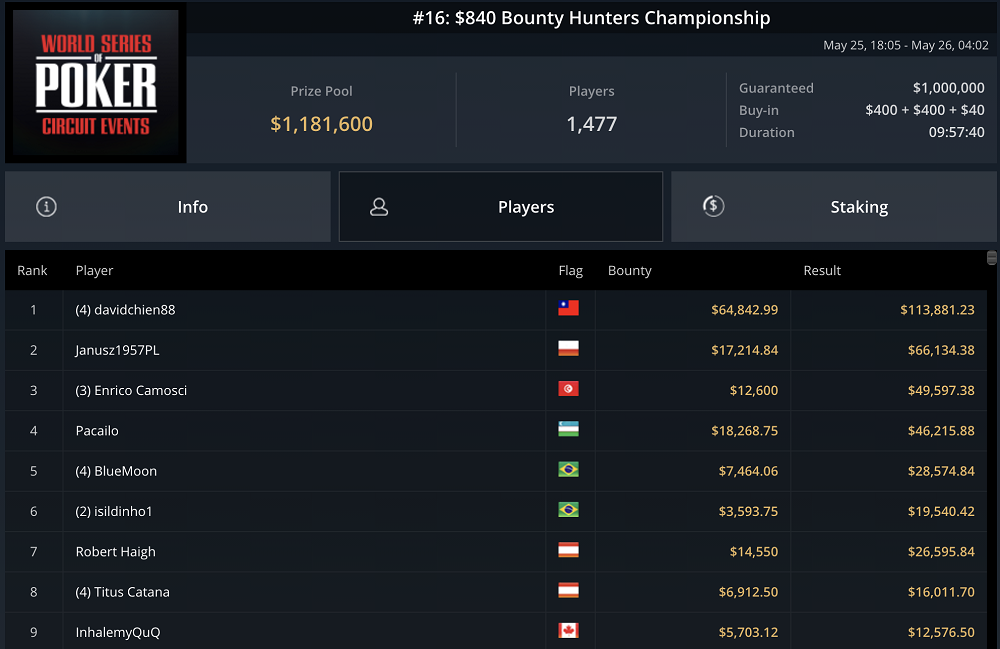 One of the bargain tournaments of series took place on the penultimate day of the festival. Event #17 Ultra Deepstack Bounty Turbo came with a buy-in of just $52.50 and $25 each went to the bounty and cash pool respectively. The tournament attracted a stunning 6,233 entries and that boosted the prize pool to $311,650.

It took seven hours to whittle down the field to a winner and Estonia’s “N@pudp6hjas” accumulated all the chips and far largest bounty prize of $9,505.42, which pushed their overall prize to $21,747.03. His opponent “running well” from Hungary made it to second place for a combined payday of $15,359.15 as yet another Natural8 player missed out on victory by just one spot!

Only one featured player reached the top 100 spots in Leonid “LeBroHbKA” Logunov, who finished just ahead of Martin Pineiro and Natural8 player Dicky “Floatinworld” Tsang. GGSquad member Kevin Martin was among those to cash, finishing in 289th place for $241.12. 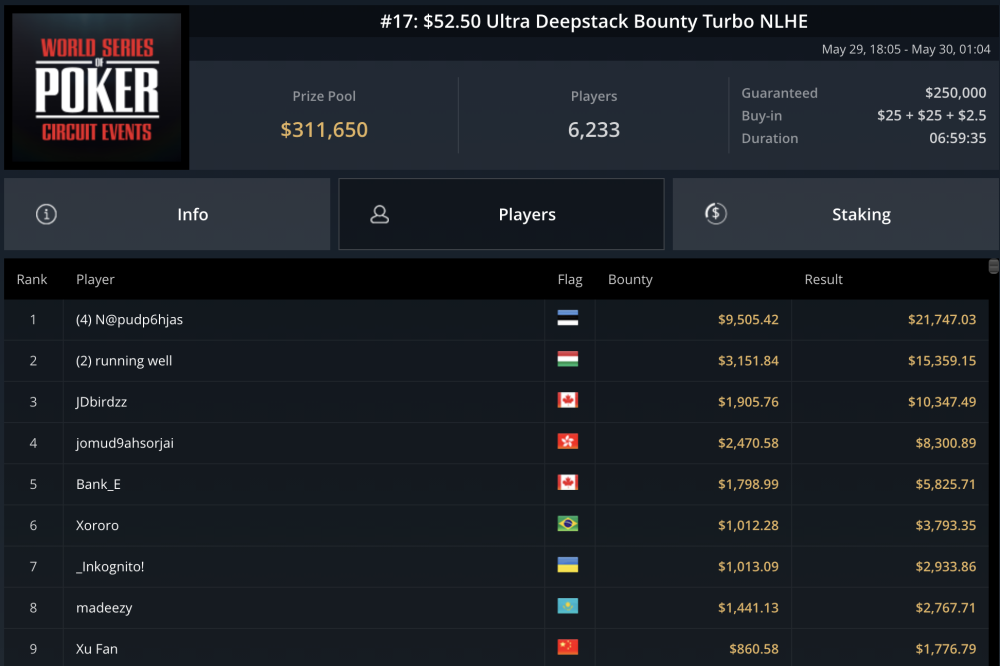 Overall Festival Stats at a Glance

With all but one tournament completed, the overall numbers for the latest WSOPC festival are set. Only the $525 Main Event is yet to determine a champion with nine players remaining, as the final table will be streamed on the GGPoker.tv Twitch channel on Saturday, June 5.

Lets take a closer look at the Ring Events and the entire festival in a nutshell.

With an average buy-in of $386 during the 18 Ring Events, they made for 10 of the 21 seven-figure prize pools during the entire festival. All of them surpassed their guarantee to push the initial number of $19 million in guarantees to nearly $26.5 million. More than 154,000 entries resulted in an average of 8,603 contenders across all Ring Events.

Speaking of the flagship Main Event, that one is down to just nine players after a long Sunday night poker session. None other than Swedish online legend Niklas Astedt leads the pack with more than 149 million in chips while China’s Yanfei “aoteman1888” Chi is the only other contender above 100 milion in chips.

Fabian Spielmann (47 big blinds), GGSquad member Patrick “Egption” Tardif (30 big blinds) and David Miscikowski (14 big blinds) are also among the notable finalists. They have $75,843.19 locked up and the winner can look forward to a payday of $758,443.29. On top of that, the eventual champion will join Team Champions and receive a $50,000 sponsorship by GGPoker Network. 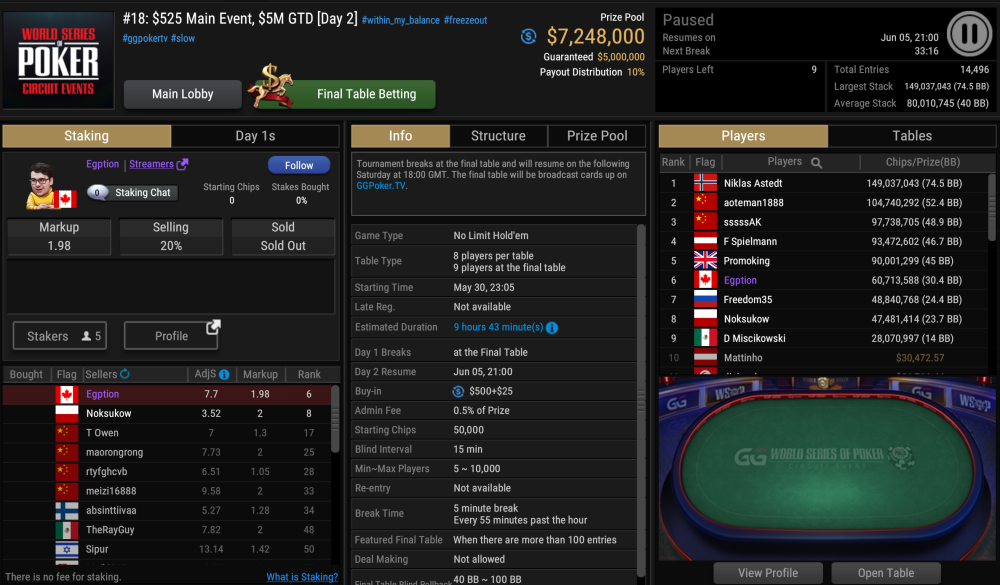 Boosted Week is already underway and will run until June 6, 2021. Nearly 1,000 daily tournaments will see their guarantees boosted all week long! And High Rollers will then join the fray again as High Rollers Week runs from June 6 to 13 with 27 events and $15 million in guarantees. Stay tuned for more info about this festival in the next blog entry.