The High Rollers Series at a Glance

The higher stakes action kicked off with the $840 High Rollers Marathon, drawing a total of 352 runners and creating a prize pool of $281,600. 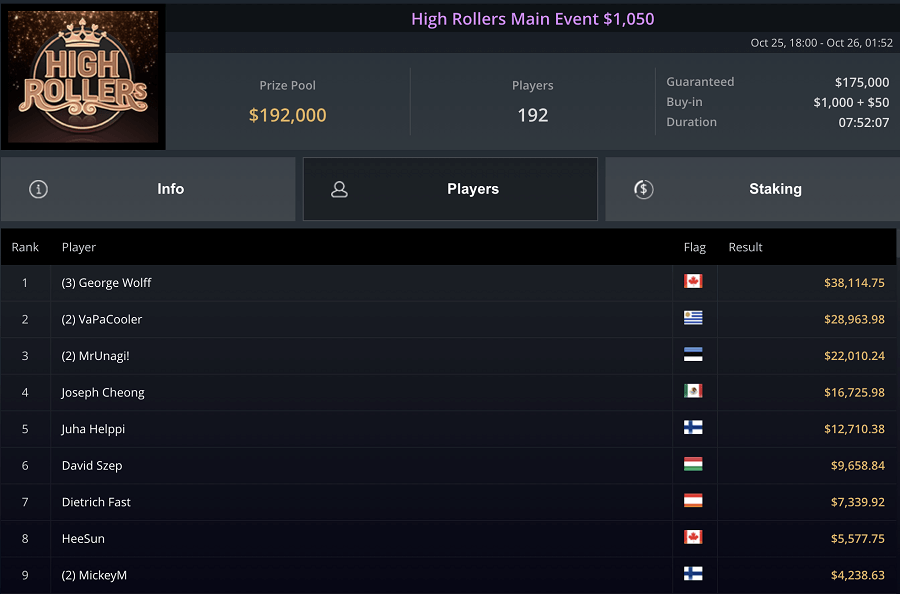 The $1,500 Sunday High Rollers easily covered its guarantee, and 228 entries resulted in a total of $324,900 up for grabs. 31 players cashed, and the final table included big names such as Dario Sammartino, Francois Billard, Ami Barer, and Ole Schemion. 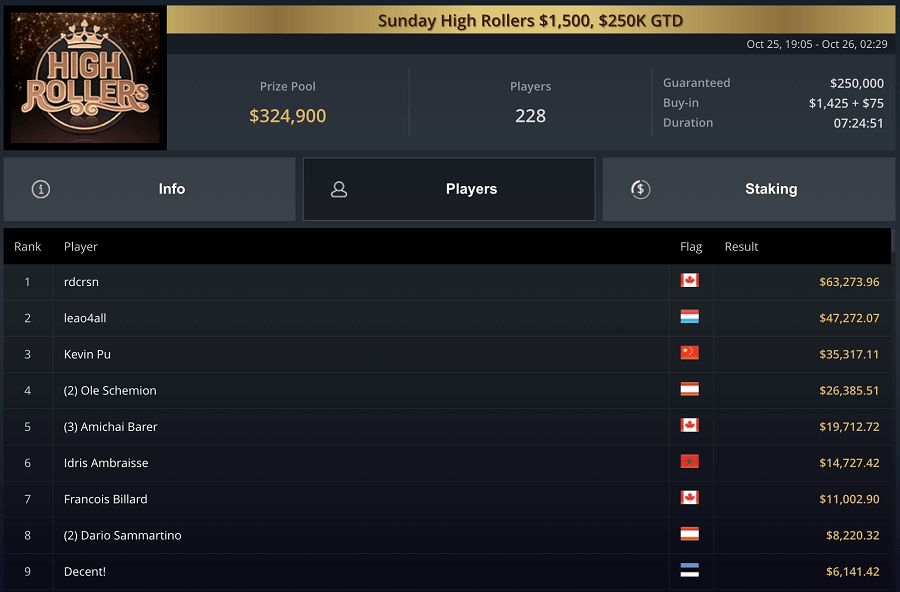 Another two $5,250 Blade tournaments wrapped up after that, including the Mulligan (52 entries). The top six shared $260,000 in prize money, with Mikita Badziakouski, Niklas Astedt, Pascal Hartmann, and Juan Pardo Dominguez bowing out in that order. Muehloecker finished 2nd for $61,094.80, while Laurynas Levinskas earned a smooth $99,358.89.

The Global MILLION$ and the High Roller MILLION$ 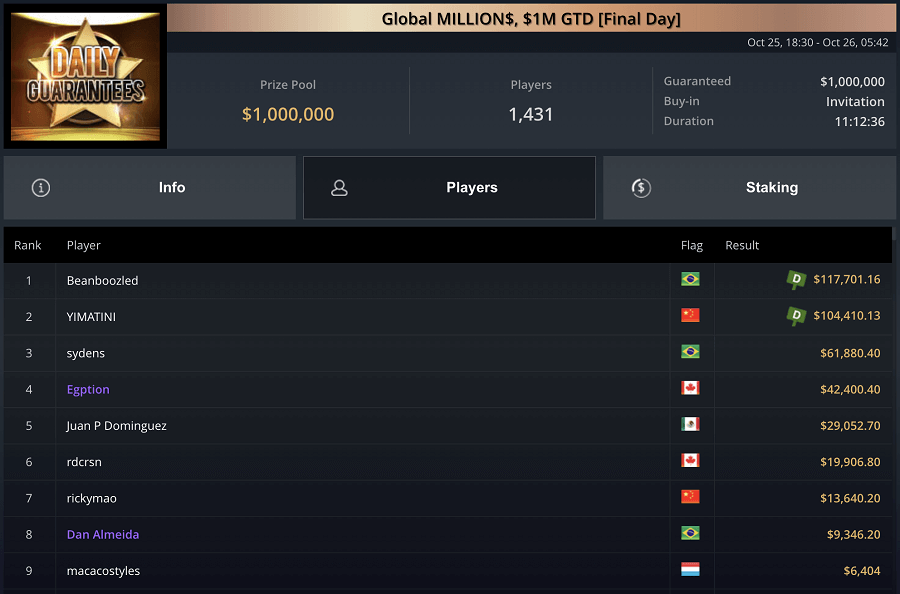 The guarantee of $1,500,000 was also missed in the $525 High Roller MILLION$, as 490 survivors reached the final day. Natural8 Team Hot ambassador Pete Chen and Rainer Kempe were the last two players to leave empty-handed, as 300 contenders cashed for at least $1,232.55. 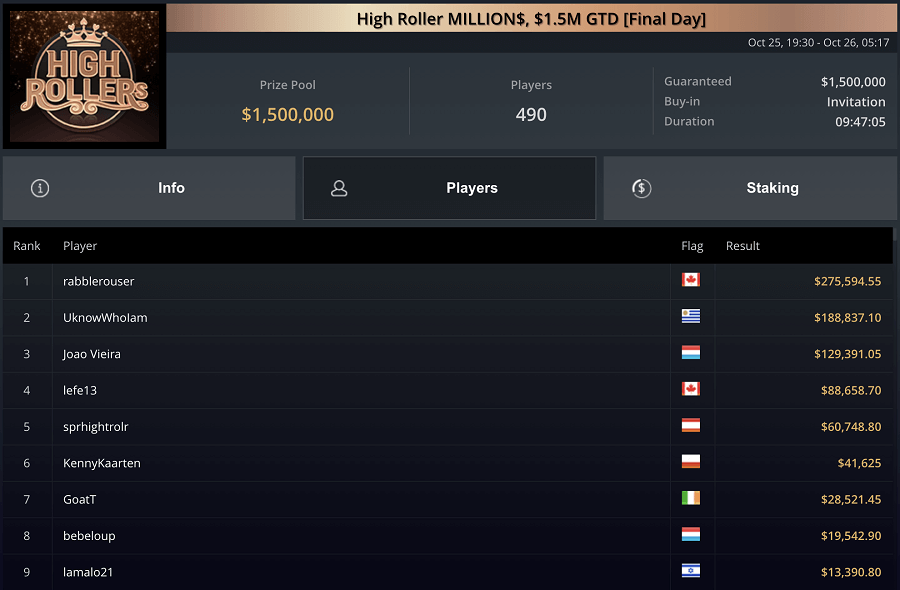 The paid places in the highest regular buy-in of the Super Sunday schedule were already reached, when the final table in the $10,300 Super MILLION$ had bagged their virtual chips.

Viacheslav Buldygin was the bubble boy, and some of those to cash were Philippe D’Auteuil, Elio Fox, Felipe Ramos, Adam “MikePrice82” Hendrix, Anatoly Filatov, Ole Schemion and Thomas Muehloecker.

Matthew “Nator” Hyman earned consecutive final tables and finished in 9th place this time, as he became the first casualty of the live-streamed final table. Roman “RRomashka” Emelyanov turned a $100 satellite ticket into $54.713.27, and Joao Vieira was the next to bust in 7th place for $70,542.78.

Georgios “Manousos” Sotiropoulos had to settle for 6th place and $90,952.25, when ace-five suited failed to pick up any help against the ace-king of Niklas Astedt, who then hit a straight against the top pair of Artur Martirosian ($117,266.53) to reduce the field to the final four. Mark Radoja then missed a flush draw with queen-nine suited to settle for $151,193.96.

Michael Addamo was seeking an unprecedented fourth victory in the event, but a move with just a pair jacks against the two pair of Niklas Astedt left the Aussie with fumes and he hit the rail in 3rd place for $194,937.35 the very next hand.

Astedt subsequently held a 2-1 lead over Joakim “MrGambol” Andersson, but the latter turned things around and dealt the final blow with ace-eight for turned two pair against king-nine suited for flopped top pair. Andersson’s maiden victory in the tournament came with a payday of $324,053.21, while Astedt had to settle for $251,336.47. 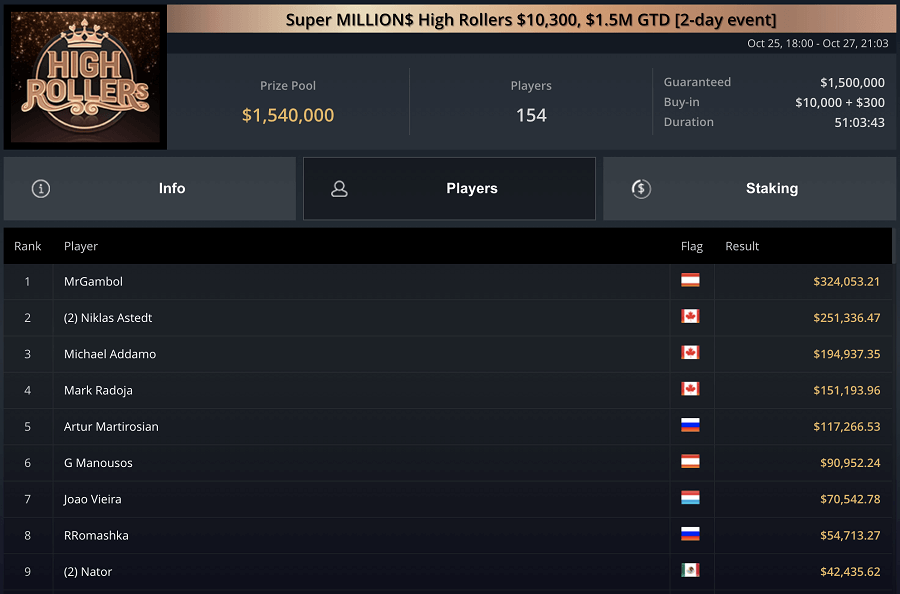 The next big series players can look forward to on Natural8 is the Battle of Malta Online. Happening 1-22 November, there will be 15 Ring events and plenty of Side events, as well as a $30,000,000 guarantee!